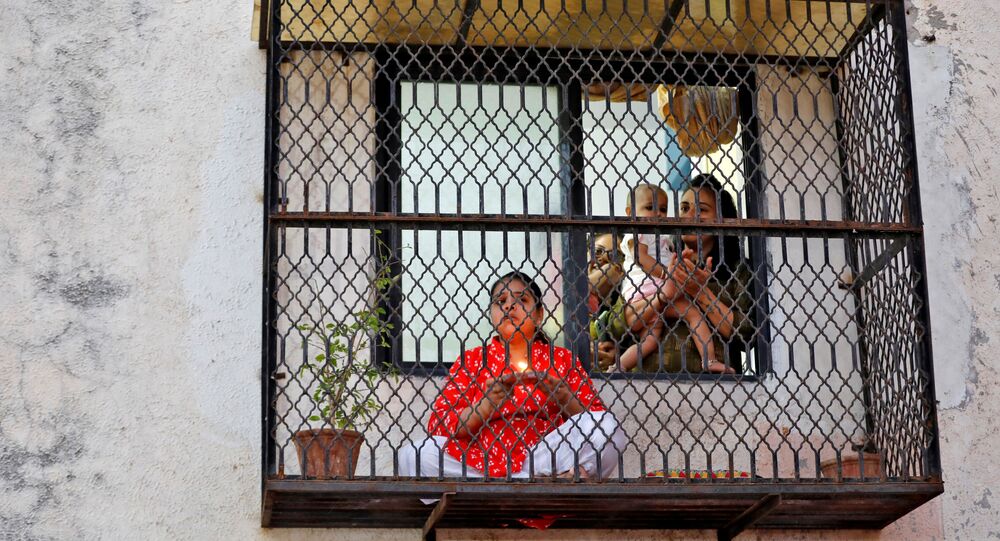 New Delhi (Sputnik): As the world struggles with a vast pandemic affecting 199 countries and infecting over 650,000 people, the deadly virus has infected 775 in India while claiming 19 lives. A top Indian doctor said cases are likely to increase even with a lockdown in place until at least April 5.

Senior medical official and top doctor Arvind Kumar, chairman of Center of Chest Surgery, told Sputnik that India has the upper hand over Europe and US due to imposing its 21-day lockdown while countries in the West have not followed the strict regimen.

A surgeon and professor at New Delhi's Sir Ganga Ram Hospital Kumar, who earlier made headlines by saying that India has moved to stage 3 of community transmission, also talked about criticism his country is facing following accusations of under-reporting COVID-19 cases, as well as accusations of conducting insufficient screenings in the world's second-most populous country.

Sputnik: Will the largest and strictest lockdown in history be beneficial to India?

Dr. Arvind: There is no denying that the situation is critical and the virus is evolving very rapidly.

Countries like the US, Britain and Italy are facing catastrophic consequences as they showed slackness at the public faith. Whereas, the government of India has been very proactive in dealing with the virus. Our only advantage is that we have taken drastic measures a few weeks earlier than the United States and Europe. Even today the US has not lockdown the country except for New York. Putting up a lockdown in the country with 1.3 billion people is a very bold step and all credit goes to Prime Minister Modi for taking the step. It needed the guts to place a billion people under house arrest.

Dr. Arvind: No one can predict what is going to happen on 15 April, the last day of lockdown. Best to do today is to keep all options open for tomorrow. So theoretically if you ask me, yes, there is a possibility of lockdown extending to more than 21 days. Many people say that it requires 6 weeks for lockdown but that call has to be taken around 9-10 April.

Regarding the situation after 21 days, my hunch is we will have an increasing number of positive cases till 5-6 April, after that maybe the number will start coming down. If that happens, the lockdown could be lifted in said number of days. But it’s better to let the number come down to the lowest possible level instead of opening the lockdown. I think, even if the lockdown will open, it will be lifted in phases. Mass congregation places like cinema halls, school, colleges, universities, should probably continue to remain shut for longer as it would be beneficial.

Sputnik: How prepared is India’s healthcare system to deal with the deadliest transmissible viruses, which could have a huge socioeconomic impact on its 1.3 billion population?

Dr. Arvind: Today, we are much better prepared than two weeks back. Two weeks later, we will be much better than we are today. With the rate at which the virus is spreading, more importantly, the time government has bought to enforcing the lockdown. The precious time will give us ample opportunity to boost the infrastructure across the country to be able to meet the challenges, to some extent.

The whole issue is to collectively decrease the number of cases to a minimum so that our healthcare can handle it. If we let the disease explode massively in the community, as Europe and the US did, then, in that case, no system can handle the load as is being seen in the West.

Sputnik: With the US facing a critical scarcity of beds and ventilators due to the onslaught of coronavirus cases, despite spending about 8.5 percent of GDP on healthcare, can India’s fragile healthcare infrastructure bear the load of overwhelming cases of coronavirus in future?

Dr. Arvind: There is an attempt by the government to create at least 50,000 beds. A good number of beds are being created by all state government across India. Virtually in every district, we are trying to create a separate facility. It is important to have a separate identified COVID facility so that we do not end up mixing one virus patient with others. Talking about ventilators, India is ordering nearly 45,000 units which should be available in the next two weeks. There were lots of other agencies which were not manufacturing ventilators they are now shipping. We have found that one ventilator can be used for four people; it immediately quadruples our capacity.

Side by side infra-health manpower is being prepared, as the virus is new and no one has expertise. All this massive exercise is happening side by side. In two weeks’ time, we will be much better prepared to handle the load, if it comes. On one hand, the government is doing everything to reduce the number of possible patients by way of the lockdown, on the other hand, they are also preparing for the worst possible scenario.

Sputnik: There has been speculation that the Indian government is not accurately reporting the number of coronavirus cases, including by premier medical research labs in the country such as  ICMR and Health Ministry, claiming that the country has no cases of community transmission so far. What do you think?

Dr. Arvind: According to the government of India, there is no mass-community transmission, however, there are some people who have moved to India from these foreign countries and escaped during quarantine. There is a possibility that these people may have infected others in the community.

The number may be more than what is declared because obviously it is foolish to believe that we know every patient that has been infected. So the real number can be larger than what is identified. How much larger is a guess, and any number could be right.

It is to be noted, over the next few days, that although the number will continue to rise, it does not mean the lockdown has failed. The effect of lockdown comes about 10-14 weeks after the lockdown [is put in place]. We will not have any beneficial effect till 5 April, till then the number will rise.

Sputnik: Do you agree with the assertion that India is not conducting large-scale screening? Why would such a densely-populated country with a billion-plus population test so little?

Dr. Arvind: We need to have isolation, which the government is trying to do. The fact remains, we need to do more screening, but, there cannot be large-scale indiscriminate screening because the population of our country is huge and there is no way we can have that many testing kits available.

Till that time, the government is trying to develop indigenous kits which can be mass-produced, while, at the same time, making the best use of available test kits. Therefore, testing is being done in subsets, and not mass testing. The number of people being screened is increasing every day.

Sputnik: What is the criterion for testing; if a person has fever, cough and sore throat will he/she be tested?

Dr. Arvind: Only people with fever, cough and sore throat, plus travelling history or contact with others travelling abroad are being tested. As well as all patients with pneumonia and severe breathlessness, along with fever are being admitted. However, if the breathlessness is not significant you are not likely to be screened.

Sputnik: How much time does a patient have from day one of becoming infected to being cured?

Dr. Arvind: As the disease either results in the death of the patient or getting cured, the whole process ends in two weeks’ time. It is the time the virus dies in your body.

From day one of infection, the virus starts multiplying in the body. In a day or two, a person becomes infectious. Then the incubation period starts. During this period a patient is highly infectious and this is the time when others can get infected, as the person has no symptoms. Overall, 85 percent of patients have a mild case of the disease, 15 percent require hospitalization, 5 percent require a ventilator and 1-2 percent may die despite being on the ventilator.

Coronavirus Cases in India, US, Europe

According to the most recent data, India has a total of 933 (including 47 foreign nationals) infected with the coronavirus with 20 recorded deaths. The country has discharged 79 people. On 26 March, India saw a drastic spike in the number of deaths in a single day, with 7 fatalities, and 75 more confirmed cases.

Italy, the worst-hit country with coronavirus, announced 919 new dead, the highest number of deaths reported in any country in 24 hours since the pandemic began. Italy has seen over 10,000 dead and Spain has 5,800 deaths. Europe has over than 300,000 cases of coronavirus, with the most registered in Italy and Spain.