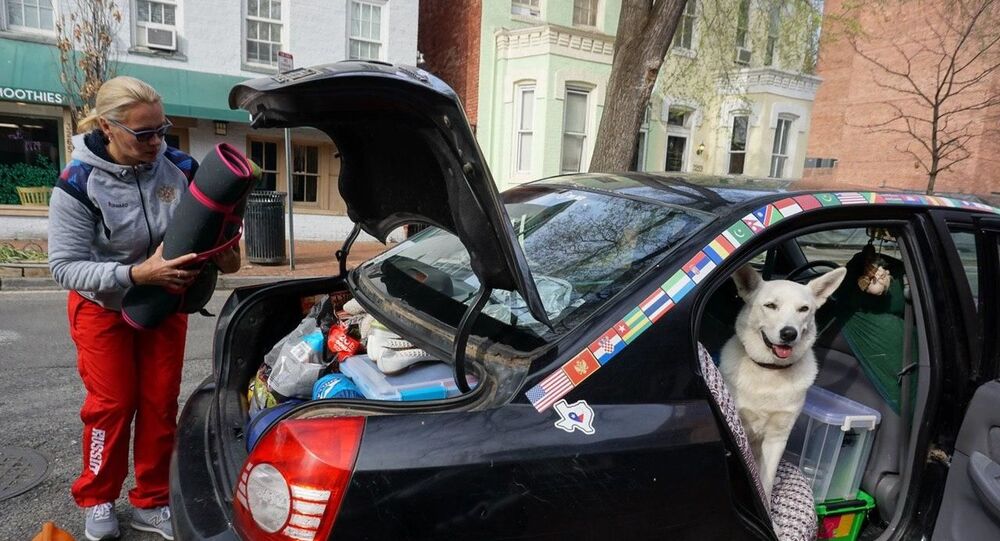 WASHINGTON (Sputnik) - Irina Sidorenko, a former top manager from Russia, and Greta, her amiable dog, cannot wait to see an end to the coronavirus pandemic for a very special reason. They have a car journey around the world to continue.

An almost 3-year and 100,000-mile-long adventure richly-packed with breathtaking vistas, natural disasters and social calamities, human cruelty and heartwarming generosity brought both globetrotters through 65 countries to the United States - only to find its land borders locked in an effort to contain the outbreak.

"It’s an unforeseen scenario. I would have expected something like this in Africa or in Asia, but not in America," Irina says. "I planned to go to Mexico from the US and further south, but the Mexican border is closed. So is the border with Canada, which was my plan B. We are waiting."

In the meantime, Irina stays at her friends’ house near Washington, DC, where Greta befriended local dogs and attempts chasing deer in a forest. Irina hopes the hiccup won’t last longer than two or three weeks and, inadvertently echoing US President Donald Trump, looks forward to the country’s opening as soon as possible.

Going back to Russia is looked at as the last resort and the worst-case scenario. It would mean an untimely finish of the circumnavigation, dubbed "S Gretoy Vokrug Sveta", a Russian-language rhyme which means "Around the World with Greta."

"We won’t return to Russia until I see there is no way to continue the journey. For this will be a complete return of the expedition, not just a pause until coronavirus abates," Irina says.

Before venturing out into war-torn Syria, braving torrential rains, escaping robbers’ gunpoint and self-medicating for a tropical disease, Irina had a successful white-collar career. She built a TV company in Siberia, managed political campaigns and worked as PR Director in a high-end real estate company in Moscow.

"It’s probably high time to come up with some sort of a beautiful legend, why I’m going ‘round the world by car with a dog. But there is no beautiful legend, there is an inner intention, an old dream, a goal I follow. To drive around the globe," Irina explains.

To make her dream into reality she learned to drive and got a driver’s license, bought a car, a modest Hyundai sedan, and in May 2017 after two shorter-range test voyages - to the country of Georgia and Morocco - finally hit the road with Greta as a sole companion.

"She is the only one who would listen to you at any moment, understand you in any situation, lick your tears, smack your nose, warm you on a cold night or simply keep silent sitting nearby," Irina says. "Greta thinks the car is our home."

Greta, a mixed breed of a husky and Labrador, has spent three out of five years of her life on the move. She loves thorough belly rubs, tasty snacks, but would occasionally bark at children passing by - an after-effect of mistreatments by kids in the Asian and African countryside.

In Guinea, a country in the west of Africa, they drove right in the middle of civil unrest. Protesters pelted the car with stones, broke windows and ransacked the belongings before security forces came to the rescue. In neighbouring Cote d’Ivoire Irina contracted malaria and, unable to reach a hospital, a hundred miles away, treated herself for three days until fever receded. In Tanzania’s wilderness, Irina had a tense stand-off with locals who asked for money brandishing a rifle.

Africa with its patchy civilization footprint was the toughest leg of the journey, but the most picturesque one.

"I got into another world. It was breathing and shining. Bright colours, stunning sunsets, sunrises, rainbows across the sky," Irina recalls.

Conversely, her Syrian drive-through was so uneventful, that Irina barely mentions it.

"We hit a dead-end in Jordan. They wouldn’t let us into Israel, as I didn’t have all papers they required. We couldn’t get to Turkey via Egypt - there was no ferry between the countries. We were not allowed into Saudi Arabia, because I am a woman driving a car not just alone, but with a dog. And there was a war in Iraq," she says.

All of a sudden Jordan reopened its border with Syria. "We drove through Syria, from south to north, to Aleppo. Roads controlled by government forces are safe, absolutely safe," Irina says.

Irina speaks no foreign languages, except for a few phrases in English and French she picked up during the travel.

"I once got stuck in a national park and walked five kilometres [3 miles] to a highway for help. I explained it all with gestures - five kilometres, over there, a tow rope. They came with me and pulled out the car," she says. "In fact, it is one of the stereotypes detrimental to a traveler - to believe that without the command of a foreign language there is no way to negotiate, ask for directions or something else."

Irina and Greta everywhere meet people ready to help. Strangers would fill up a gas tank for no charge or - on the most recent occasion - convince Washington policemen to waive fines and not tow away the car with Russian license plates carelessly parked next to the Capitol building.

The car now has a five-day stock of supplies, including anti-malaria drugs, a vacuum cleaner and an extra bag of canine food. Travelers are ready to go as soon as borders reopen.

"My plan is to get from the United States to Mexico and all the way down to the southernmost point of South America, Tierra del Fuego. Then we go to Uruguay or perhaps Chile or Peru, somewhere at this latitude, and sail on a cargo ship to [Russia’s] Vladivostok or South Korea and from there to Vladivostok to return triumphantly to Moscow," Irina says.

She expects her adventure to last one or two more years but is already making plans for the future.

"I would very much like to open a guest house for travellers - this is just a dream - with a car care centre at it. It really thrills me," Irina says.