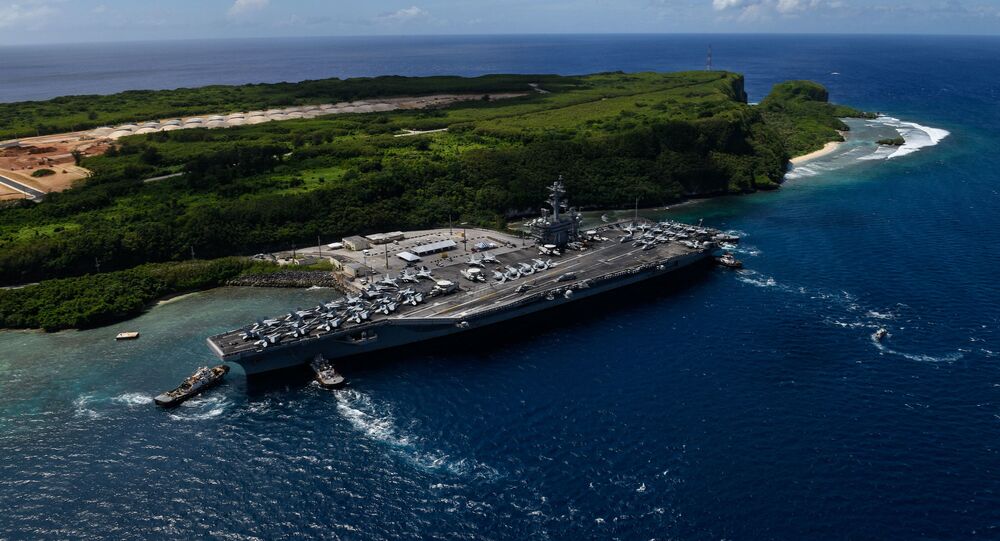 Will US Aircraft Carrier Become Next Diamond Princess?

Questions have been raised over whether there will be large-scale novel coronavirus (COVID-19) infections on a deployed US warship after the US aircraft carrier Theodore Roosevelt reported three confirmed cases on Tuesday in what is believed to be the first such COVID-19 case on the deployed warship.

While the US Navy likely has contingency plans against biohazards to prevent a large scale outbreak on board, cross infections remain possible if sailors on the carrier did not apply a great deal of caution, but the incident will still deal a heavy blow to the US' military capability and global deployment, experts said on Wednesday.

The US Navy announced on Tuesday that three sailors on board the Theodore Roosevelt aircraft carrier in the Philippine Sea have tested positive for COVID-19, US media outlet The Hill reported on Tuesday.

This marks the first incident of COVID-19 presence on a deployed US warship, the report quoted US Acting Navy Secretary Thomas Modly as saying.

The three sailors have been quarantined and will soon be flown from the ship, and people on board who had contact with the confirmed cases are also being quarantined, Modly said.

Holding a crew of 5,000 people with dozens of fighter jets and other types of aircraft, the carrier recently visited Vietnam, and then went on a mission to carry out exercises in the South China Sea "in an effort to send a message to Beijing," US media said.

Chinese military experts said that sailors live and work in crowded cabins on an aircraft carrier, making it vulnerable to infectious diseases. Some military observers said the Theodore Roosevelt might become the next Diamond Princess or Grand Princess, two cruise ships isolated at sea and seriously struck by the coronavirus.

The Theodore Roosevelt is likely equipped with effective quarantine facilities, and the US military is expected to equip its warships with strong anti-biological attack facilities, so a large scale outbreak on board might not occur (as easily as on civilian cruise ships,) Song Zhongping, a Chinese military expert and TV commentator, told the Global Times on Wednesday.

However, if the sailors did not have good awareness of epidemic control, the three people could have already spread the virus prior to their quarantine, Song said, noting that the US aircraft carrier should transfer them via helicopter to a nearby land-based hospital as soon as possible.

Vietnamese media previously reported that the carrier's officers and sailors took part in courtesy calls, technical exchanges and sport events, and US sailors on board also went ashore and visited the city of Danang. Reports also said some Vietnamese were allowed to board the aircraft carrier.

While there is no evidence to relate the COVID-19 cases to the carrier's visit to Vietnam, all of these activities risked cross infection, analysts said, noting that since COVID-19 has a latent period of one to 14 days and there are possibly asymptomatic patients, time will tell if there will be more cases on the aircraft carrier.

Regardless of whether the outbreak on board Theodore Roosevelt will further spread, the incident will definitely have a serious impact on US' military operations across the world, analysts said.

Many of the US military's exercises will have to stop, as some soldiers and officers will become infected with the virus and undergo quarantine, resulting in combat position vacancies, Song said.

As of Tuesday, the US Navy has announced 86 confirmed COVID-19 cases, including 57 active military personnel. The number for the entire US military reached 174 by Tuesday, 41 more than the previous day.

US Defense Secretary Mark Esper also admitted earlier that the US military's combat readiness could be affected.

Esper said on Monday that the disease has forced the US military to cancel some training exercises, and the virus could affect its readiness to conduct combat missions if it worsens, USA Today reported on Monday.

Since the US military follows a global deployment strategy, the COVID-19 will have the biggest impact on its combat readiness, Song said, noting that the US has military bases around the world to exercise its international influence, but now the strategy has backfired and many of its troops must stay where they are and cannot interact with its allies as frequently.