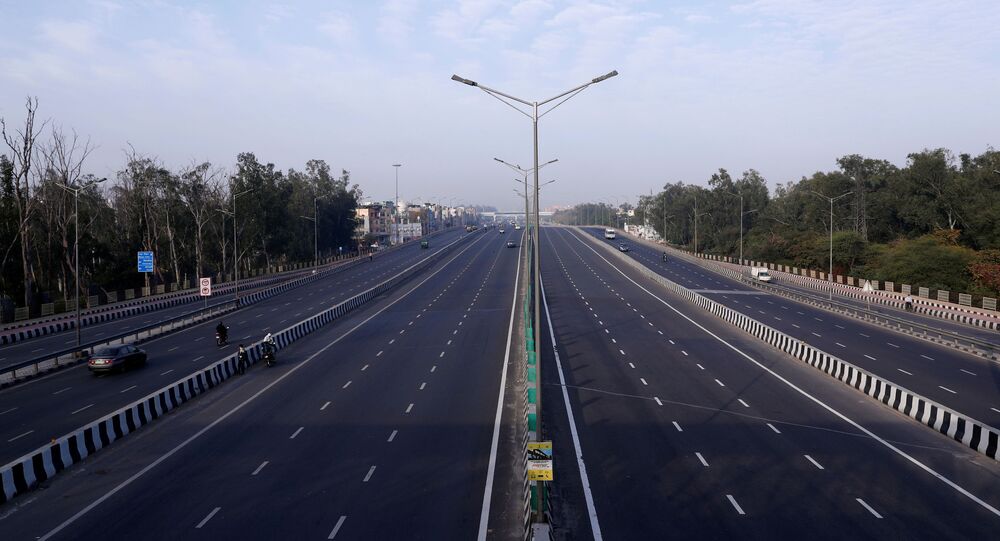 New Delhi (Sputnik): Despite the number of COVID-19 cases being relatively low as compared to Western countries, Indian Prime Minister Narendra Modi has announced a lockdown of 21-days to contain the pandemic, fearing that the crisis could quickly spiral out of control.

While India is sending planes to evacuate its nationals stranded overseas, workers in the country are left helpless with no money in pockets and nowhere to go.

The majority of the workforce employed in manufacturing units and construction in urban centres are the rural poor who migrate to the cities in search of work. Such workers are now walking hundreds of miles to return home as all modes of transportation have been banned for 21-days.

It appears that many companies have failed to comply with the Prime Minister’s appeal to employers to not fire employees or stall payments during the lockdown period.

Sunil Kumar, a labourer waiting for public transport on National Highway 24 along with 20-25 other stranded people, said: “I have walked 50 km since morning, now that everything is shut for the next three weeks I will have to walk home till Bareilly (in Uttar Pradesh)”.

Modi sent millions of its citizens into a frenzy after announcing the shutdown with only four hours’ notice on 24 March. People with purchasing power hit the grocery stores and markets to stock up while those with holes in the pocket and without a proper roof over their heads, packed their bags to move back to places where they will feel more secure in trying times.

“He asked for Janta (Public) curfew for one day, it was fine. But he ordered a nationwide shut down at just four hours’ notice. We have to return to our homes with everything shut here and no money. Even if the shops are open they are charging way more than the normal price,” added Sunil complaining that they should have been given at least a 24 hours’ notice before enforcing 21 days of lockdown.

Thousands stranded on roads and at bus depots know that they will not receive compensation or benefits from the government as the facilities are unlikely to cover them or often get get lost in the chain of transmission.

Several state government, including Delhi, Uttar Pradesh, Tamil Nadu and Kerala announced compensation to daily workers but the monetary help will either take months to reach them or others, mostly uneducated and uninformed will never know about the compensation.

“We will never get the money from the government as we are daily wagers and poor,” said a man with a dejected smile of his face when asked about compensation announced by the government.

The workers, who used to work as security guards and landless labourers, said they been evicted from work without pay and are forced to walk on the deserted roads without food and water.

This broke my heart. The dejected smiled with which he said they won't get any monetary help from the govt as they are poor is heart-wrenching.#Lockdown21 #COVID2019 #21daylockdown https://t.co/YFBhs9wjCE pic.twitter.com/TFKVbKLk0I

“I will walk till where I can. Everything is shut, we have not had anything since morning and we have walked for 50 km,” said Ramveer, a worker who had covered the distance of 50km on foot to reach Anand Vihar Bus Depot.

With trains, metro, autos and private buses shut, the sight of government buses plying on route NH24 came as a ray of hope to workers stranded on the road. But their hopes were short-lived. The police officer on duty with the bus said only those with a medical emergency or working in governments jobs would be allowed to board.

Country-wide, only specified buses and vehicles are allowed to move with a handful of them employed in each state for essential services.

Delhi chief Arvind Kejriwal ordered that only 50% of Delhi Transport Corporation's (DTC) fleet will ply the roads - and then for those involved in essential services with a sticker pasted on the front left windscreen saying "for staff of essential services only and on government duty".

Similarly, more than two-thirds of those employed on a regular salary do not have a written contract according to a labour force survey conducted by the National Statistical Office in 2017-18.

These people risk being fired without pay or notice and with no contract in place that clearly states their terms of employment.

For those working in the formal sector - and are taxed and monitored by the government - the outlook is little better. Companies with a workforce of up to 300 can legally fire any employee without government permission.