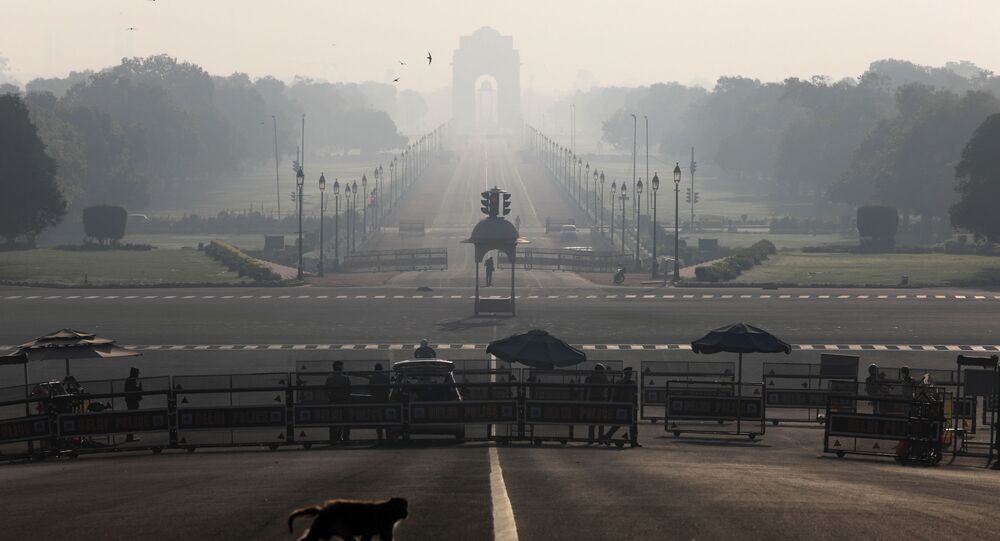 New Delhi (Sputnik): As India crossed 500-mark of coronavirus cases, Indian Prime Minister Narendra Modi announced an unprecedented country-wide lockdown for the population of over 1.3 billion people. With only four hours' notice, people thronged to markets and local shops to stock household supplies for biggest quarantine the world has ever seen.

India, one of the most densely populated countries in the world, woke up to an eerie calm on Wednesday, its streets relatively deserted.

Life has come to a standstill among its population of over 1.3 billion, with streets once bustling with vendors and pedestrians now deserted, once-jammed thoroughfares all but empty and barely a sight of passengers at railway stations and airports, with all modes of transport shut down.

The nation's capital Delhi, usually crawling with automobile traffic on any given day, remained eerily silent, with residents restricted to their homes amid the coronavirus scare.

People remained indoors abiding the orders of Modi, who directed a nation-wide lockdown started from 25 March until 15 April as the country races to break the chain of transmission of coronavirus.

As India moves into a 21 Day Lockdown amid Corona virus menace, here's how deserted National Highway in Delhi looks like. Delhi-Gurgaon expressway is one of the busiest and has chaotic traffic jams on usual days.#21daysLockdown #CoronavirusLockdown #Delhi #coronavirusindia https://t.co/luimg9snjB pic.twitter.com/kLPHupUdBY

India's business capital Mumbai, the country's second-most populous city after Delhi, where many of India's wealthy reside along with Bollywood celebs, was also a virtual ghost town. Its famous beaches and popular Marine drive, always crowded with tourists, remained empty. With 93 coronavirus positive cases, Maharashtra state has recorded the highest number of cases, with two deaths.

Places of worships have also been ordered to close. One Hindu pilgrimage site in Jammu and Kashmir, the Vaishno Devi cave-shrine, which has 15,000-18,000 pilgrims on any given day, was among the religious sites ordered to shut down for the 21-day lockdown.

Jammu and Kashmir: Vaishno Devi Temple in Katra shut for devotees amid #21daysLockdown, in wake of the #Coronavirus outbreak. pic.twitter.com/YhAIOGHUkq

An eerie silence has gripped Jammu and Kashmir, which has seven coronavirus cases. The streets of the restive region, which has seen conflicts involving protesters which controversially resulted in its partitioning and loss of statehood last year, were practically devoid of pedestrians.

The thoroughfares of Tamil Nadu state also remained deserted. The state’s Health Minister C. Vijayabaskar announced the first death from COVID-19, of a 54-year-old patient who had tested positive. The state has reported a total of 18 coronavirus cases.

While the number of cases in India is relatively low, with 512 active cases as compared to the United States, Europe or China, Indian Prime Minister Modi has attempted biggest lockdown as a preventive step, anticipating that a mounting toll could lead to a disaster-like situation, far bigger than anywhere else due to the country's billion-plus population.