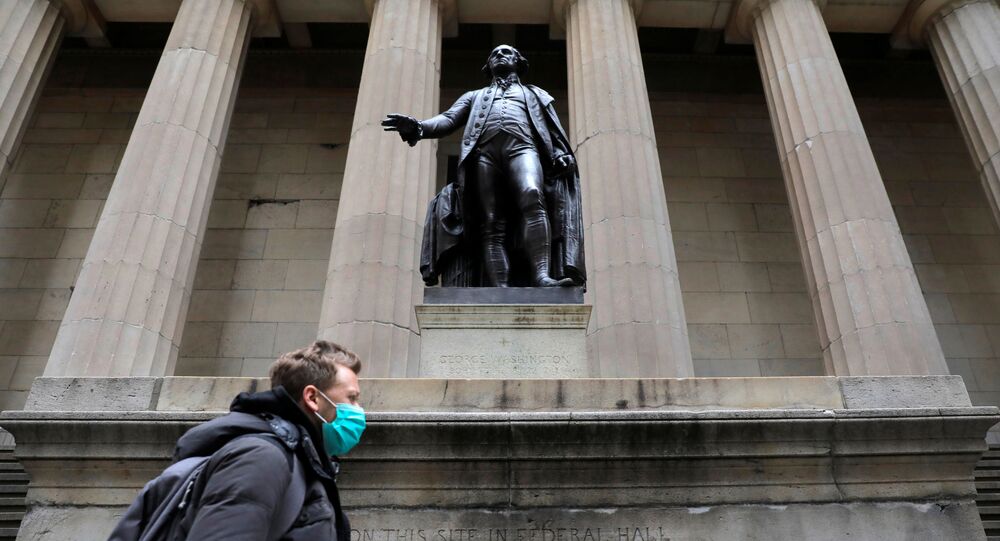 Wall Street suffered its worst losses since 1987 on Monday amid concerns over the new coronavirus pandemic, with a Goldman Sachs call with corporate customers last week allegedly suggesting that up to half of Americans may end up getting infected, and that three million people could succumb to virus-related complications in the US alone.

The leaked notes of a conference call between Goldman Sachs chief economist Jan Hatzius and chief medical officer Michael Rendel with its merchant banking clients contains “erroneous information and language which was not used on the call,” a bank representative has told Forbes.

The call, which took place last Thursday, allegedly contained worrying information about the virus’s impact on the public, estimating that up to 50 percent of Americans, or 150 million people, would contract COVID-19, with up to 2 percent of those expected to die.

According to an alleged leaked summary of the call in Forbes’ possession, mortality is expected to weigh heavily “towards the elderly and immunocompromised; meaning up to 3m people (150m*.02).”

The summary explains that “in the US about 3m/yr die mostly due to old age and disease, those two being highly correlated (as a percent very few from accidents). There will be significant overlap, so this does not mean 3m new deaths from the virus, it means elderly people dying sooner due to respiratory issues. This may however stress the healthcare system.”

The summary also estimates that 70 percent of Germans, or 58 million people, will contract COVID-19, with Germany described as “the next most relevant industrial economy to be effected.”

© AFP 2020 / ODD ANDERSEN
A picture taken on March 9, 2020 on the Polish side shows a medical staff taking the temperature of a driver during sanitary checks at Jedrzychowice border crossing, between Poland and Germany, in a measure to protect against the spread of the novel coronavirus.

Commenting on the synopsis of the phone call, Goldman Sachs said it was a “very basic summary” that “contains erroneous information and language which was not used on the call.” The bank did not specify which data was inaccurate, instead directing media to a pair of reports which do not mention expected infection and mortality rates.

Other information in the alleged leaked Goldman phone call suggests that the virus is “likely seasonal,” and that “peak-virus is expected over the next eight weeks, declining thereafter.” The summary comments on the “debate as to how to address the virus pre-vaccine,” pointing to US quarantine efforts vs. the UK’s approach, “allowing it to spread so that the population can develop a natural immunity.”

According to the report, “quarantine is likely to be ineffective and result in significant economic damage, but will slow the rate of transmission, giving the healthcare system more time to deal with the case load.”

The summary suggests that the “real damage” to the world economy “is driven mostly by market psychology,” with Goldman analysts said to expect the economy to “fully recover in the 2nd half of the year.”

“There is NO systemic risk. No one is even talking about that. Governments are intervening in the markets to stabilize them, and the private banking sector is very well capitalized. It feels more like 9/11 than it does like 2008,” the summary concludes.

Those ‘optimistic’ predictions stand in sharp contrast to a report put out by S&P Global on Tuesday, with the US financial services company expecting COVID-19 to spark a global recession this year, with the US and China said to be hovering on the brink of recession already.