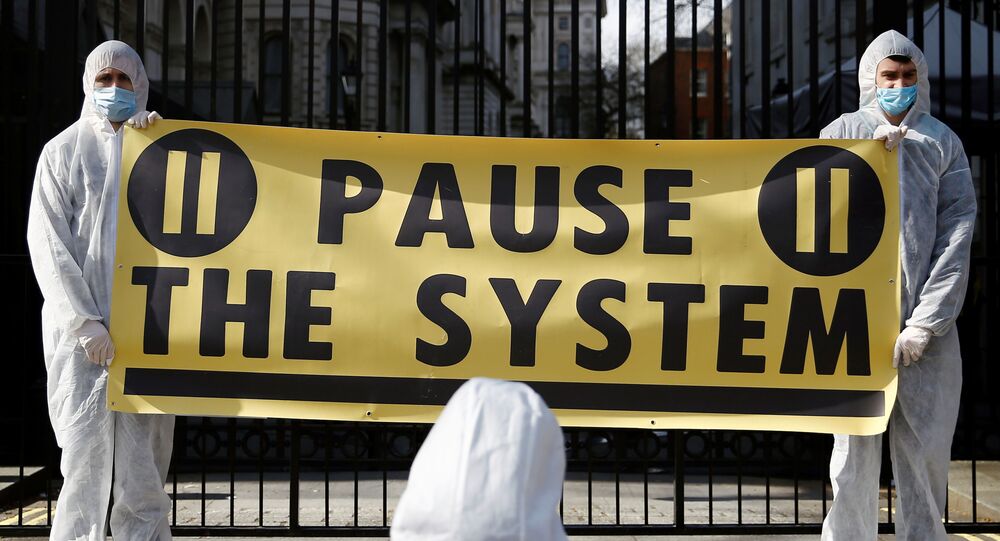 The End Of The World? How The COVID-19 Compares With Previous Global Crises

The FTSE 100 share index fell more than seven percent on Monday as the coronavirus pandemic worsens and the US Federal Reserve has launched a US$700 billion stimulus programme in a bid to stave off a global recession. But how does it compare to previous global crises?

The COVID-19 coronavirus, which started in the Chinese city of Wuhan, has now spread to almost every country on the globe and claimed more than 6,500 lives.

A cure for the virus is said to be 18 months away and the pandemic has forced many countries to introduce swingeing quarantine systems which have hit productivity and damaged their economies.

​Travel between countries has plunged, threatening the viability of many airlines as well as hotel chains and many others involved in tourism.

But haven’t we been here before? How does it compare with previous crises?

Severe Acute Respiratory Syndrome (Sars) was also a coronavirus and it was first noticed in 2002 in the Guangdong province of southern China.

It is thought Sars was a virus which jumped from animals to humans as a result of people eating civet cats.

The vast majority of cases were in China, Hong Kong, Taiwan, Singapore and in Toronto, Canada.

​There have been no recorded cases since 2004 and although there is still no vaccine for Sars, public health experts say the threat has disappeared.

An article in The Lancet last week by Professor Annelies Wilder-Smith said: “COVID-19 differs from Sars in terms of infectious period, transmissibility, clinical severity and extent of community spread.”

Sars spread in a similar way to COVID-19 and had similar symptoms but The Lancet article said it was brought under control by “syndromic surveillance, prompt isolation of patients, strict enforcement of quarantine…and in some areas community-level quarantine.”

In September 2001 a bolt out of the blue was to transform the world and it had a disastrous, though short-lived effect on the global economy and especially air travel.

When al-Qaeda terrorists flew two planes into the Twin Towers in New York and another into the Pentagon in Washington they not only killed 3,000 people but triggered a mass panic among travellers, especially Americans.

All planes were temporarily grounded in the United States and when they were allowed to resume, strict new conditions were imposed on passengers.

​As the White House prepared to invade Afghanistan in the search for Osama bin Laden and his al-Qaeda cronies, US nationals stopped flying internationally with devastating consequences for airlines.

In December 2001 British Islamist terrorist Richard Reid was arrested on board a flight from Paris to Miami as he prepared to detonate a “shoe bomb”, exacerbating the global fear.

The crisis led to Swissair, Belgium's Sabena and Australia's Ansett airlines all going bust and the US carrier Trans World Airlines (TWA) was swallowed up by American Airlines shortly after 9/11.

Eventually international air travel resumed its pre-9/11 levels but passengers became increasingly forced to endure long lines at the baggage check and were forbidden from carrying liquids on board.

In 2009 another flu outbreak caused panic around the world.

Swine flu - officially known as A/H1N1pdm09, shortened to H1N1 - was first spotted in Mexico in 2009 and got its name because it was similar to a virus which affected pigs.

Here’s a thread to explain a little more 👇

A decade ago, in June 2009, I was appointed Health Secretary by Gordon Brown. Days later WHO declared a global pandemic. Swine flu was never as serious as the current situation. But, from where I was standing, it felt pretty scary ...

​There were dire predictions for a global pandemic when swine flu first emerged but it transpired that many older people were immune to it and most of the deaths occurred in children with existing health problems and pregnant women.

In August 2010 the World Health Organization finally declared the H1N1 pandemic was over and the world breathed a sigh of relief.

The stock market falls in the last couple of weeks have been the biggest since the crash of 2008.

But back then it was not a pandemic or a terrorist attack, which was to blame, it was the greed and incompetence of bankers in the United States.

The crisis was triggered by so-called sub-prime mortgage lending, whereby banks lent large amounts of money to people on low or unstable incomes to allow them to buy houses or apartments.

​They then bundled up these sub-prime mortgages and hid the precarious nature of these loans from Wall Street.

The whole system unravelled and in September 2008, after New York-based Lehman Brothers collapsed, the truth was finally revealed.

It emerged banks all over the world were being dragged down by sub-prime loans and faced going bust.

The crisis triggered a credit squeeze as banks stopped loaning money and this impacted businesses all over the world.

In October 2008 Gordon Brown’s government pumped £37 billion of taxpayers’ money into HBOS, Royal Bank of Scotland and Lloyds TSB to stop them from going belly up.

US President George W Bush also pushed the Emergency Economic Stabilization Act through Congress, which pumped in US$700 billion to buy toxic assets from banks.

His successor, Barack Obama, pumped another US$80 billion into the auto industry in early 2009 after General Motors and Chrysler faced oblivion.

It took the world’s economies almost a decade to recover from the financial crisis.

Ebola virus disease - or Ebola haemorrhagic fever - was first discovered in 1976 but it was not until 2014 that it hit the headlines.

In that year Ebola broke out in remote villages in Guinea and quickly spread to Sierra Leone and Liberia, both of which were only just recovering from devastating civil wars.

The financial crisis of 2008 was a cake walk compared to this. All that happened in 08 was real estate prices fell, borrowers defaulted, and lenders lost money. Today global commerce is grading to a halt. Production is shutting down. This crisis is economic, not merely financial.

​It was transmitted between by blood or other bodily fluids or by touching contaminated surfaces or bedding.

The early symptoms were headaches and muscular pain, fatigue and unexplained bleeding. The fatality rate was 70 percent and death was usually extremely painful and involved bleeding from every orifice.

In total around 28,000 people were infected and 11,000 died before the WHO managed to control it - through quarantine and disinfection - in 2016.

The virus is believed to have been caused by people coming into contact with infected fruit bats, porcupines or monkeys.

There is still no cure for Ebola and occasionally new cases are reported in west Africa.

But because it never spread beyond Africa, it did not create a global crisis.

Pauline Cafferkey, a British nurse who contracted Ebola while working in Sierra Leone, survived and last year she gave birth to twins.

In the 1970s the world’s economy was even more reliant on oil than it is today.

In October 1973 Egypt and Syria attacked Israel in an attempt to regain territory - the Sinai peninsula and the Golan Heights - lost in the Six Days War of 1967.

​When the US decided to resupply its ally, Israel, with weapons Arab members of the Organization of Petroleum Exporting Countries (Opec) retaliated by imposing an embargo on oil exports to America.

The US was hugely dependent on imports from the Arab countries and the price of oil shot up as demand exceeded supply.

This led to a financial crisis in the US and Europe, which lasted well into the late 1970s.

In February 2001 foot-and-mouth disease was discovered at an abattoir in Essex.

​It soon spread across the country and although there were only 2,000 cases in the UK the government ordered the slaughter of six million sheep, cattle and pigs in infected areas.

In the 1980s the emergency of AIDS (Acquired Immune Deficiency Syndrome) hit the world like a body blow.

The disease, which hit the body’s immune system and led to a painful death, was first spotted in drug addicts and homosexual men.

​It transpired that it was being passed by unsafe sex or by sharing drug needles.

​HIV - which develops from AIDS - spread from the homosexual to the heterosexual community and has so far killed 32 million people, out of 74 million who contracted it.

But retroviral drugs have now meant that most HIV positive in the West can live fairly ordinary lives and will not pass it on to sexual partners or to their children. But HIV continues to kill around 770,000 a year in the developing world.

Of course the coronavirus crisis is a mere drop in the ocean compared to the biggest disaster of the 20th century - the Second World War.

In 1939 Adolf Hitler’s Germany invaded Poland, triggering a war with France and Britain. The following summer the German army invaded and overran France, Belgium and Holland.

In June 1941 Hitler then invaded the Soviet Union and six months later the war became truly global when Japan attacked the US Navy at Pearl Harbor, bringing the Americans into the war on the Allies’ side.

After four more years of bitter and bloody conflict Germany was finally forced to surrender - but only after Hitler committed suicide in his bunker in Berlin - and Japan also threw the towel in after the US dropped two atomic bombs on Hiroshima and Nagasaki.

The war caused 73 million deaths around the world and devastated the economies of Germany, Japan, Britain, France and the Soviet Union.

But the German and Japanese economies bounced back to become two of the most successful in the world.