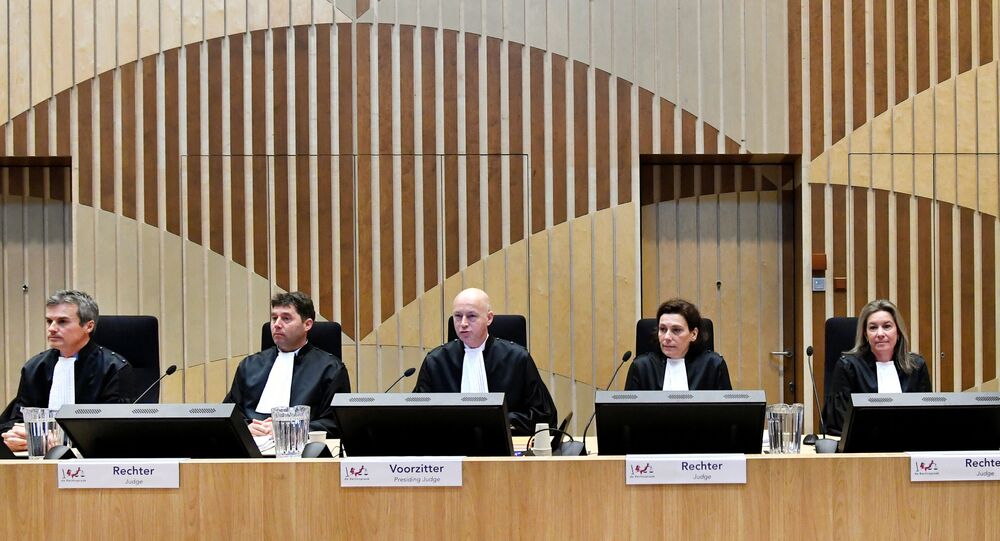 After just two days of hearings, a Dutch court has postponed the rest of the MH17 trial, in which three Russian nationals and one Ukrainian are being tried for an alleged role in the downing of the Malaysia Airlines Boeing-777 in 2014.

Day two of the MH17 trial in Amsterdam was marked by the same rhetoric as the opening sessions on March 9th, but with one exception: while the first speeches in the courtroom of the Justice Complex Schiphol were mostly about the four defendants – three Russian nationals and one Ukrainian who are believed to be involved in the downing of Malaysia Airlines flight MH17, during further hearings it became increasingly clear that the overall tone of the trial switched to blaming Russia.

As NL prosecutor accused Moscow of “actively obstructing” investigation and "Witness M58” was quoted by another prosecutor as claiming to have seen Rus soldiers and BUK,the shift from blaming particular pro-independence fighters to accusing Russian state, became much more obvious

​Contrary to these accusations, over the course of five and a half years following the crash of the MH17, Moscow, despite the fact that it was not allowed to take part in the MH17 probe organised by the Netherlands-led Joint Investigation Team (JIT), provided information which may have helped shed light on what happened to the ill-fated passenger jet in the skies over the conflict zone in south-eastern Ukraine.

JIT concluded that the plane was downed by a Buk surface-to-air missile, which was brought from "the territory of the Russian Federation." Moscow cooperated with investigators by providing radar data from the day of the crash and technical documents from Almaz-Antey – the manufacturer of Buk anti-aircraft missile systems. The Russian MoD pointed out that the missile, which JIT believes to have been used to shoot down the Boeing, was in the hands of Ukraine at the time of the crash.

Following the JIT announcement of the names of four people suspected of being involved in the tragedy, Russian President Vladimir Putin noted that "We have our own version, we presented it, unfortunately, no one wants to listen to us".

Almaz-Antey, despite being a RUS arms manufacturer with top levels of secrecy, provided investigators with tech specs of BUK anti-aircraft missiles and shared data of 2 BUK forensic tests with JIT. So much for “actively obstructing” the investigation. https://t.co/kJn4RglG4s

Independent journalists Max van der Werff and Yana Yerlashova from Bonanza Media pointed out that according to a Malaysian court-certified audio expert, phone taps – both the ones published by Ukraine’s SBU on the day of the crash, and those from a later period, which were eventually accepted by the MH17 court as evidence, were edited. Yerlashova, who spent time on the ground in Donbass during her work on a documentary one year after the crash, found unclaimed pieces of the plane's fuselage near the crash site and made sure that the debris was delivered to the Netherlands, but says that the parts never appeared on the plane’s mock-up which was presented to public.

Apparently, some Bonanza findings might have been taken seriously by Dutch prosecutors, who changed their mind about putting on trial two pro-independence fighters with call signs 'Delfin' and 'Orion' - the same individuals mentioned in a Bonanza leak a few days before.

It was also announced in court that the MH17 investigation would continue with the trial running in parallel, so it remains possible that prosecutors will make further changes.

Not to brag, but two days after we leaked a document, Dutch prosecutor announces 'Orion' and 'Delphin' will not be prosecuted.

​The Dutch legal system, with all of its above-mentioned flexibility, received praise from US Secretary of State Mike Pompeo, who expressed his support for the MH17 trial in a tweet on the day before the hearings.

Those responsible for the downing of Malaysia Airlines Flight #MH17 that tragically claimed 298 innocent lives must be held accountable. The U.S. has confidence in the Dutch legal system and calls on all States to cooperate fully with the ongoing investigation into this tragedy.

​During the past few years mainstream media in the Netherlands rarely focused on the MH17 crash theories aside from that which blames pro-independence fighters and Moscow, as most journalists appear to have applied a "guilty" verdict even before the trial began.

Apparently, with the 'help' of MSM,public has already accepted the official version of MH17,way ahead of trial. Audiences are bombarded with this narrative. 1st thing I saw on local TV on 1st day of trial were white chairs near Rus embassy in the Hague – all over TV, social media pic.twitter.com/CnrTLj9cqC

​Dutch political scientist Kees van der Pijl told Sputnik that the media’s role in shaping public opinion on MH17-related matters is enormous, and it is very hard for those who have doubts about the official version to get their message across to the audience:

“If you get your morning and evening newspaper and you watch television news program, it’s not easy to develop on your own an alternative view. And the channels through which these alternative views get through to public “bloodstream” are very limited. However sad it is, but the mainstream media are nearly lost. We can no longer rely on what’s being broadcast, because they stick completely to the official narrative.”

Van der Pijl alleged that the recent Bonanza leaks, which appeared to shed light on the inner workings of the JIT, prove the low moral, legal and juridical levels of the investigation team.

​The Malaysia Airlines Boeing 777 was enroute from Amsterdam to Kuala Lumpur and crashed in the armed conflict zone in eastern Ukraine on 17 June 2014, killing all 298 occupants, two thirds of them Dutch nationals.

JIT, comprised of investigators from the Netherlands, Australia, Belgium, Ukraine and Malaysia, concluded that the plane was downed by a BUK anti-aircraft missile which was produced in 1986 and transported to Donbass from Russia shortly before the MH17 incident. The Russian Ministry of Defence disagreed with the conclusion, saying that by 2014 it did not have the weapon in its arsenal, as all Russian Buk missiles produced in the USSR in 1986 were de-commissioned by 2011.

Malaysian authorities have also been critical of the JIT findings, with Mahathir Mohamad, who served as the country’s prime minister until February 2020, saying that proof of Russia’s guilt is insufficient.

Three Russian nationals - Igor Girkin, Sergey Dubinsky, and Oleg Pulatov, as well as Ukrainian, Leonid Kharchenko, are being tried in absentia by the MH17 court, which started in Amsterdam on 9 March, for their actions, which, according to JIT, led to the downing of the ill-fated Boeing.

After the second day of hearings, it was announced that the court would recess until 23 March.