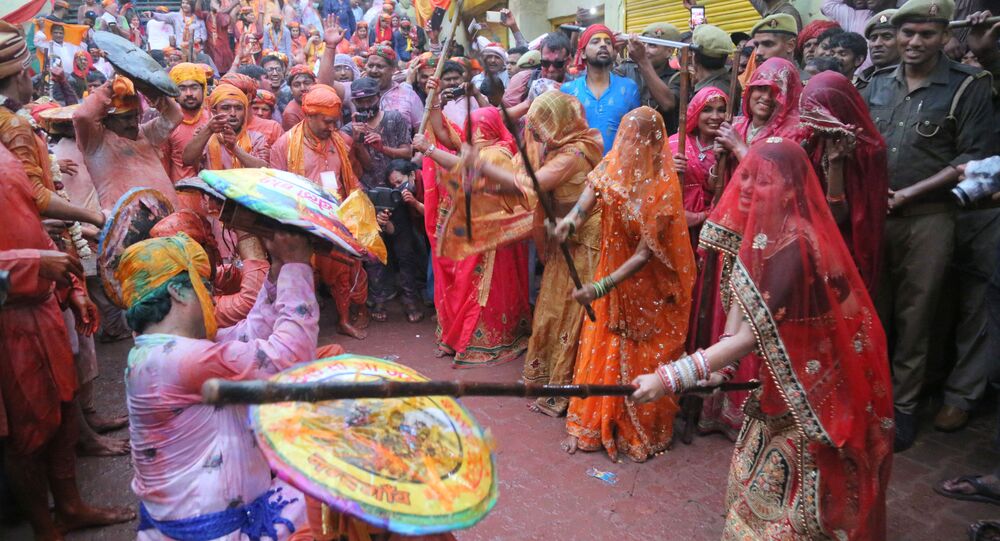 New Delhi (Sputnik): The unique festival of Holi is celebrated to mark the arrival of spring and features colourful crowd dancing, roads covered in a rainbow of colours, coloured powder in the air and water balloons. It's India's second most important and popular festival after Diwali.

The vibrant Holi festival, which last from 9-10 March this year, is celebrated in a myriad of ways, including the throwing of gulal (coloured powder.) But in different Indian cities, the festival is celebrated in sharply different ways.

Apart from colours, Holi is also synonymous with a delicious drink called “Thandai” - which is made with intoxicating cannabis or bhang, almonds and milk. The drink is widely popular among youngsters as well as elders for religious reasons.

Swipe↔️ This HOli🌈, Don't kill your COLOURFUL❤️ dreams cause once you kill them they become like your shadows BLACK & WHITE🤟, never leaving your back. Making you regret it, for your whole life. 🤗 . . ##holi2019#happyholi#zonestreet #holi#festival #indian_undiscovered#storiesofindia#soi#ngtdailyshot#indianphotography#instagram#_soi#spicollective#_woi#nustaharamkhor#_coi#instagram_ahmedabad#sulkh#magnumphotos70#oph##capturexindia#exploregujrat#ahmedabad#worldheritagecity#experienceahmedabad#apnu_amdavad#exploregujrat#gujaratl#SPIcollective #natgeoyourshot #kalupurmandir#holiwithtecno

Let’s look into the many facets and the uniqueness of Holi celebrations in different regions.

#HappyHoli ! Lath mar Holi - Devotees inside Krishna temple during Lathmaar holi
It takes place days before the actual Holi in the neighbouring towns of Barsana & Nandgaon near Mathura in the state of Uttar Pradesh, where thousands of Hindus and tourists congregate, each year pic.twitter.com/dHQogn6Pyg

The tradition which can scare some people is a revered way of Holi celebration in Uttar Pradesh state towns such as Nandgaon, Barsana, Vrindavan and Mathura.

The aggressive sport which is actually played in good humour is celebrated by women hitting men with batons as they try and shield themselves. The unlucky men who get hit are then made to dress as females and dance on the streets.

The mythological ties of the unique celebration say that Lord Krishna went to his consort Radha’s village to play Holi but the women of the village charged at him with batons to chase him away, again in good humour.

Lathmaar Holi : The city of Lord Krishna celebrates different formats of festival of colours. Before holi the men of Nandgaon visits the birth place of Radha, Barsana. The women chase them with wooden rods as the men intend to tease them. Men save them by shield. #Holi2020 #होली pic.twitter.com/aCcRWrB6VS

Things get a little serious here, but the centuries-old tradition is celebrated with equal enthusiasm by hermits, priests and locals in the holy city of Varanasi in Uttar Pradesh. This Holi is celebrated by people smearing ashes from cremation ground on each other amid burning pyres. The greyness of the air at the Manikarnika Ghat on the River Ganges is actually the celebration of death with the hope of attainment of “Moksha” (salvation).

Similar to the tomato festival in Spain, known as La Tomatina, this version of Holi is celebrated by people throwing laddus or sweet balls at each other. This Holi starts from the Ladli temple of Barsana in Uttar Pradesh and is also played in Vrindravan in Mathura. The story is that as a naughty child, Lord Krishna started the tradition after he smacked his friends with laddus in fun. while visiting Nandgaon.

'Laddu Holi' was celebrated at Shri Ji Mandir in Barsana yesterday ahead of the festival of #Holi pic.twitter.com/nSXnLZ192I

This gets a bit goofier and crazier here. This version of Holi is not linked with any tradition or mythological tale but born out of mischievousness. The slogan of the festival “Bura na mano holi h (Don’t mind, its Holi)” is taken rather seriously by some who drag people into puddles of mud, throw eggs on commuters and even use automobile grease and silver paint.

The Story Behind Holi

According to Hindu scriptures, the immortal King Hiranyakashipu wanted to be revered as a God and worshipped by all.  The demonic King became evil and arrogant, absorbed in dreams of immortality. So much so that he decided to kill his son Prahlad, who was a worshipper of Lord Vishnu, after he refused to take his father as the King and God. Hiranyakashipu and his sister Holika devised a plan to kill Prahlad. Holika asked him to sit on a pyre along with her. She, however, wore a cloak to protect herself from the fire. The cloak then flew off Holika while she was in the fire and she got burned while Prahlad was saved. Lord Vishnu then killed the demonic King Hiranyakashipu by taking up the avatar of Narasimha.