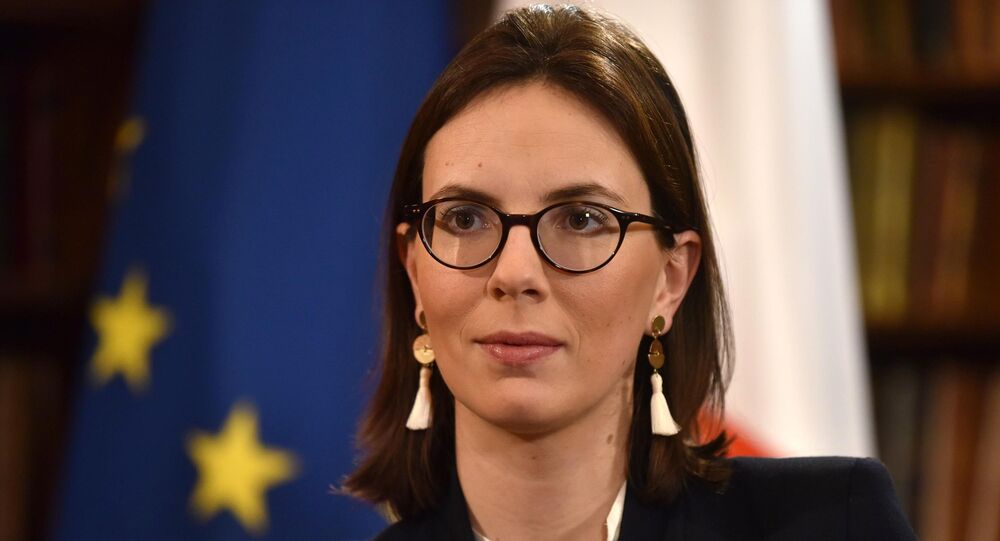 WASHINGTON (Sputnik) - The European Union needs to expand its dialogue with Russia as well as broaden its areas of engagement, French Minister of State for European Affairs Amelie de Montchalin told an audience at the Atlantic Council on Friday.

"We do not seek confrontation… We need to engage more with Mr. Putin", Montchalin said. "We need dialogue because isolation and indifference will bring an end to all the discussions we have had… It is serious. The status quo is not satisfactory."

Montchalin described Western relations with Russia as "frozen" on a wide range of issues, including the Crimea, Donbas, and cyberspace.

"If we cut the dialogue line, if we cut the dialogue with Russia, then we isolate Russia. We are trying to engage. We don't know where it is going. We are step-by-step engaging. … Our view is that we cannot put such a big power as Russia in a place of isolation", Montchalin said.

However, the French government was determined to keep in place the EU sanctions imposed on Russia following the conflict in eastern Ukraine and the successful referendum on Crimea's reunification with Russia in 2014, Montchalin said.

In March 2014, Crimea held a referendum in which 97 percent of voters supported reunification with Russia. Western countries and Kiev have not recognized the legitimacy of the referendum.

Moscow has repeatedly stated that Crimea's residents decided to rejoin Russia through a democratic procedure, as the referendum was conducted in compliance with international law, and the rights of all peoples on the peninsula are respected. Russian President Vladimir Putin said that the issue of the peninsula's territorial belonging is historically closed.