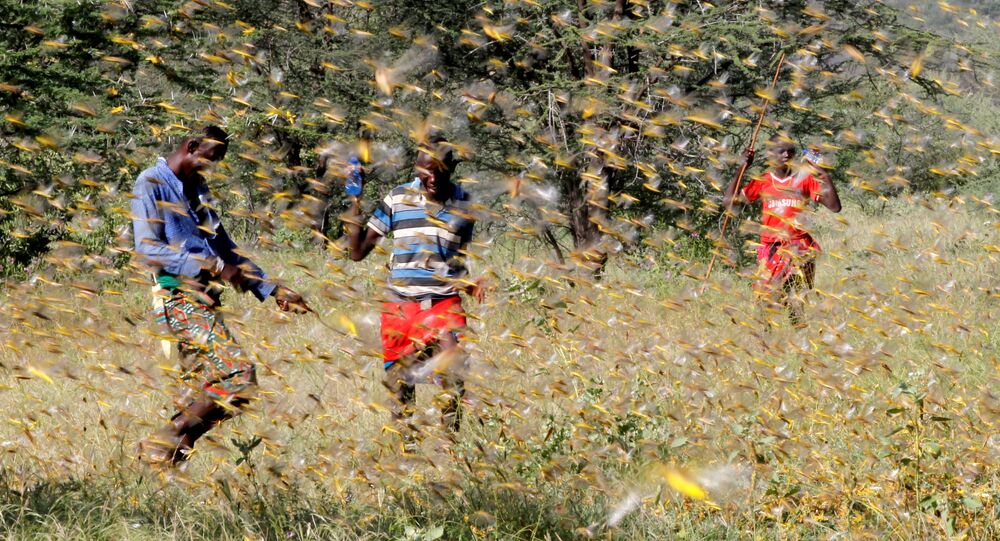 Swarms of desert locusts are creating havoc in large parts of Africa, the Middle East and Asia. UN humanitarian chief Mark Lowcock warned last month "there is the risk of a catastrophe" with 12 million people in East Africa already face severe food insecurity.

Farmers in East Africa, Iran and Pakistan are struggling to fend off swarms of marauding desert locusts which have wrought havoc with crops.

A typical swarm contains up to 80 million locusts and even a small swarm can eat the same amount of food in one day as 35,000 people.

A shortage of pesticides in Kenya is hampering efforts to contain the insects while Ethiopia is lacking planes and civil wars in Somalia and Yemen are making it difficult for widespread interventions.

​Locusts are considered the most destructive migratory pests in the world and are highly mobile, travelling up to 150 kilometres a day.

Keith Cressman, the senior locust forecasting officer with the UN’s Food and Agriculture Organization, said the desert locusts have “overwhelmed their natural predators” - which include birds and desert foxes.

He said: "They may reach Egypt at the end of 2020, Israel maybe in about May, India in May-July. There is no way they will reach Europe and there is no desert locust risk to China, which is outside their natural range and they would not cross the Himalayas because the temperatures are too cold."

Egypt's cotton harvest in the Nile Delta could be vulnerable, while Israeli farmers grow citrus fruit and vegetables in the Jordan Valley, in the West Bank.

Mr Cressman said: “There may be a risk of migration from the spring breeding areas in Iran as well as from the Horn of Africa starting about mid-May that could reach the India-Pakistan border area in time for the start of the monsoon rains. This risk will be clearer in the coming months. For now efforts by Indian authorities to control the situation have been successful.”

In 2004 swarms of desert locusts caused US$2.5 billion worth of damage to crops in West Africa. Prior to that the worst outbreak was in 1915 when locusts devastated Syria and other parts of the Ottoman Empire during the First World War.

In the Old Testament, God is said to have sent a plague of locusts into Egypt after the Pharaoh refused to free the Israelites.

​But why has 2020 seen such a boom in locust populations?

Mr Cressman explained: “Unusually conducive weather conditions for locust breeding triggered by Cyclone Pawan’s landfall (in Somalia) in December 2019 contributed to an increase in desert locust populations – as well as above-average vegetation due to good rains across the region.”

He said: "Mature desert locust swarms are now present across the region, and they are laying eggs. The next generation will begin to form swarms from late March and throughout April 2020, which coincides not only with the start of the next seasonal rains, but also the main planting season for the region. Favourable breeding conditions could allow for a 400-fold increase in the locust population by June."

Mr Cressman said: “Widespread breeding is taking place now. This is extremely alarming, especially for the three worst affected countries in East Africa. Hundreds of thousands of hectares, including cropland and pasture, have already been affected.

“Favourable breeding conditions could allow locust numbers to increase 400 times by June. If uncontained, the impact on crops will drive up hunger, this in a region already facing very high levels of acute severe food insecurity,” he said.

Uganda has deployed soldiers and Kenya has trained hundreds of army cadets to spray pesticides while in Somalia the security forces have resorted to shooting anti-aircraft guns at the swarms.

​In Pakistan officials in Sindh province fears the infestation could hit the crucial cotton harvest. Shehbaz Akhtar, an agricultural official charged with locust eradication efforts in Punjab province, told Reuters: "I have not seen an infestation like this one in my career."

China has sent experts to help its ally, Pakistan, but has denied a rumour that it was planning to send thousands of ducks to Pakistan to devour the locusts.