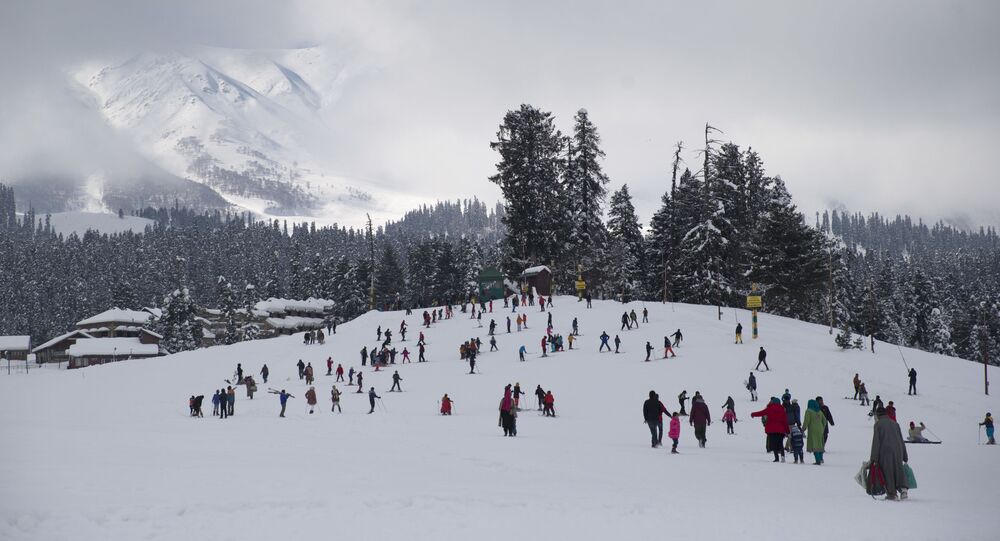 New Delhi (Sputnik): Tourism in Kashmir plummeted by 90-95 percent from August to December 2019 after the Indian government revoked Jammu and Kashmir’s special status and asked tourists along with Amarnath pilgrims to leave the place, two days prior issuing the relevant decree.

One of Asia's most famous ski destinations, Gulmarg in India’s proverbial paradise Kashmir, is all set to host its biggest sporting event since the abrogation of the erstwhile state's special status. The competition is slated for 7-11 March.

Scheduled to be held on the snow-capped slopes of Gulmarg, the much-awaited games will have 30 events under four major sports - snowboarding, snow skiing, cross country, and snow-show. Around 800 to 900 athletes from across India are set to participate in these events.

It will also have other recreational activities like snow cycling, sledging, and traditional performances of the centuries-old popular folk dance called Dhambali.

The sporting event is expected to bring back the tourists to the picturesque valley before the tourist season begins in April for Asia's Tulip Festival 2020.

“Sending good signals to the rest of the world is always important for the tourism of any state. Kashmir’s traders' body has always supported all kinds of cricket, football leagues till 2012-13. But things became difficult after the tourism industry suffered a setback due to Kashmir move", Sheikh Ashiq Ahmed, the Chief of Kashmir Chamber of Commerce and Industry (KCCI), told Sputnik.

Tourism in Kashmir hit an all-time low after the central government scrapped the special status of Kashmir and separated the Ladakh region from the erstwhile state of Jammu and Kashmir. The two now exist as federally-administered Union Territories.

Kashmir’s economy incurred losses of Rs 15,000 crore with tourism falling by 90 to 95 percent from August to December 2019 in comparison to the same period in 2018, according to data provided by the state tourism department.

But the winter sports games have instilled a sense of optimism in the hospitality industry and other businesses in the valley.

“We are hopeful that the sports event will bring more tourists to the valley in the coming months and have a positive impact on our business", said the owner of a hotel in Gulmarg.

The National Winter Games is an initiative of India's "Khelo India Youth Games" (Play India) movement- a national programme for the development of sports. Union Sports Minister Kiren Rijiju will attend the inaugural session along with other prominent personalities from politics and sports.