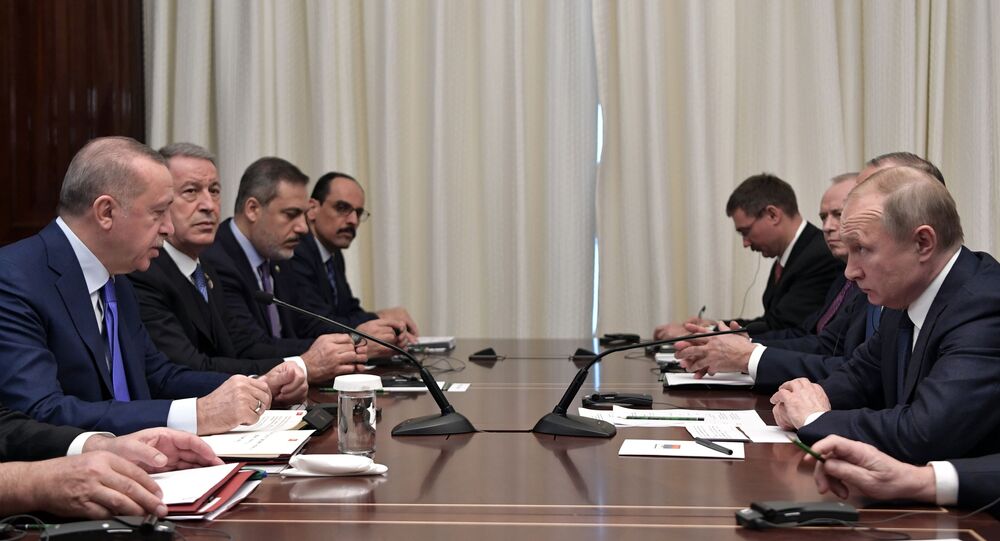 Last week, Kremlin spokesman Dmitry Peskov stated that Russian President Vladimir Putin didn't intend to travel to Istanbul to discuss the developments in Syria's Idlib with Turkish President Recep Tayyip Erdogan after the latter said that he expected to hold such talks.

"Our president is planning to visit Russia with a one-day visit on March 5," the presidency said Monday.

Kremlin Spokesman Dmitry Peskov has said that Russian President Vladimir Putin and Erdogan would discuss the implementation of the Sochi agreements on Syria.

Commenting on the upcoming visit, Erdogan expressed hope for achieving a ceasefire in Syrian Idlib after he meets Putin.

"On Thursday, we will discuss the situation in Idlib with Putin. I hope that as a result of our conversation, a ceasefire will be achieved," Erdogan said in Ankara.

The day before, the Russian Defence Ministry announced that that it could no longer guarantee the safety of Turkish aircraft flying over northern Syria after Damascus moved to close the airspace over the embattled province of Idlib.

© AP Photo / Baderkhan Ahmad
Kremlin Responds to Erdogan’s Request That Russia ‘Step Aside’ in Syria
The move came amid tensions in Idlib that escalated last Thursday after the Syrian army repelled a large-scale assault by terrorists operating in the area. As a result of a counterattack, 33 Turkish servicemen were killed.

Following the clashes, the Russian Defence Ministry said that the killed Turkish troops were mixed with terrorists from the al-Nusra group and operated outside observation posts established by Turkey in line with the 2018 Sochi agreement.