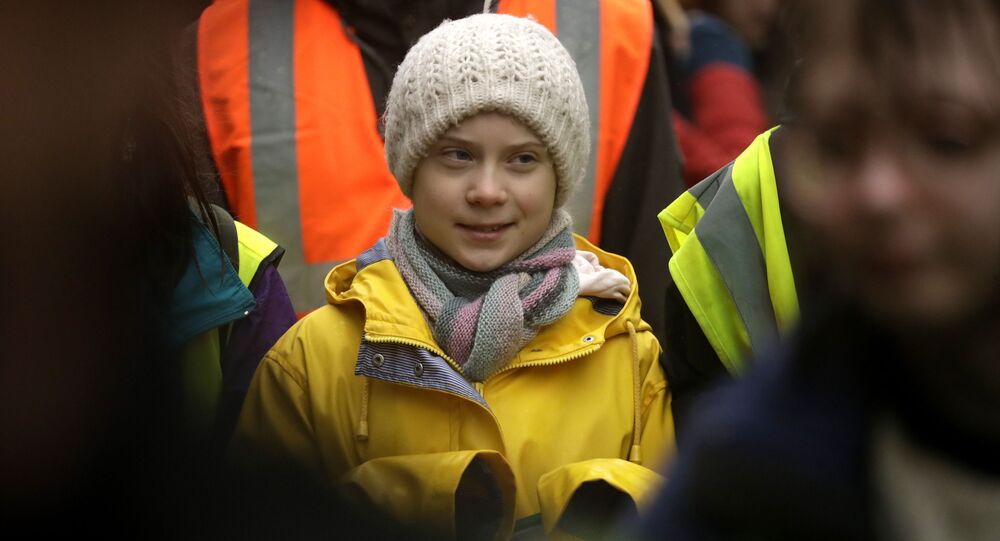 The Swedish eco-activist has appeared in a graphic decal that appears to depict her being sexually penetrated from behind. The Canadian oil company whose logo was featured has distanced itself from the visual, which was condemned by local authorities.

Canadian police did not classify a sticker showing 17-year-old Greta Thunberg engaging in a sex act as “child pornography”.

The decal features two hands pulling the braided pigtails on a young woman who has the name “Greta” captioned across her naked lower back. It also has the logo of X-Site Energy Services, an oilfield firm serving central Alberta and northern British Columbia.

Due to the sexually suggestive nature of what is depicted, Sputnik will not publish it online.

Royal Canadian Mounted Police (RCMP) investigators in central Alberta said on Friday that they had the image examined by police experts in child exploitation, who “determined that it does not meet the threshold of a criminal matter”. No investigation followed.

The cartoon was reported to police by Michelle Narang, a concerned Albertan, who said a friend who works in the energy industry had sent her a photo of the cartoon and told her that an X-Site employee was giving them out as promo stickers at job sites.

What did the company say?

Narang told HuffPost that she reached out to X-Site general manager Doug Sparrow and asked him if he was aware that the sticker depicts “the rape of a child”. According to her, the manager replied that he was aware of the sticker but responded that Greta is “not a child, she’s 17”.

In Canada, child pornography is any visual representation of a person under the age of 18 who is depicted as being engaged in a sexual activity. The criminal offences of making or distributing child pornography carry up to 14 years in jail.

Sparrow further distanced his company from the decal, telling the media that “it’s not from X-Site or any employee”. Velocity Graphics, the Alberta-based design company that has made custom decals for X-Site in the past, likewise denied having printed or being involved in the decals.

Greta Thunberg reacted to the news in a tweet: “They are starting to get more and more desperate... This shows that we’re winning.”

They are starting to get more and more desperate...
This shows that we’re winning. https://t.co/NLOZL331X9

The Swedish eco-warrior, who turned her solo strikes for climate action in Sweden into a global movement, visited Canada in the fall during her North America tour. On 18 October, she led a rally numbering in the thousands in Alberta’s capital, Edmonton; it also brought together some of her detractors from the oil and gas industry, who were outnumbered by climate change protesters.

Alberta, one of the richest oil provinces in Canada, has been under mounting pressure from campaigners and investors. In November, Sweden’s central bank said it would no longer hold Alberta’s government-issued bonds because it felt that greenhouse gas emissions in Canada were too high.