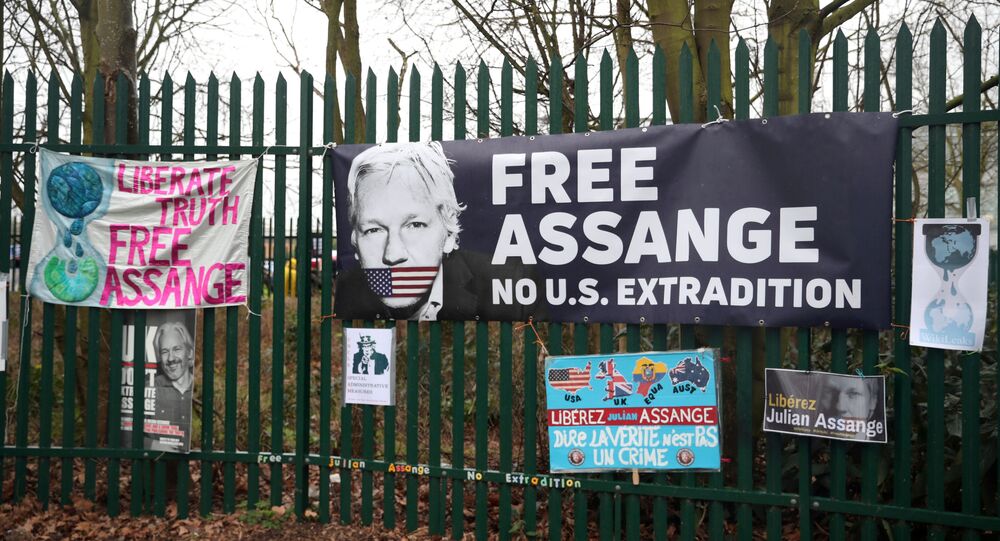 Today is the day a London court begins hearing on what looks to become (or at least precede) one of the defining cases of the decade – the extradition trial of Julian Assange. The WikiLeaks founder has found support from human rights advocates from across the globe, including France’s Yellow Vest movement.

It’s chilly and windy in London, and Belmarsh Prison is definitely not the first place that comes to mind when you think of where to hang out.

But a small crowd of several dozen people, many clad in signature high-vis jackets, have come together at the nearby Woolwich Crown Court to demand freedom for Julian Assange. Some of them have spent a nippy night camped out outside the court; most arrived today.

Protesters are holding up banners reading, “Bent judges are killing Assange”, “Jail the war criminals, free Chelsea Manning”, and “No US extradition”.

The rally is organised by human rights campaigners, notably those from Reporters Without Borders and France’s Yellow Vest movement.

“We want to give the message to the whole world that we are here to support Julian Assange,” says a Yellow Vest spokeswoman. “We want to put pressure… on the justice [system], on the politicians, so they don’t extradite him and they set him free because he hasn’t done any crime, he’s innocent. He has revealed crimes and he shouldn’t be imprisoned. People who did crimes should be in jail, not him.”

Assange has been held at the maximum security prison since last April for skipping bail and seeking shelter in the Ecuadorian Embassy in 2011. At the time, he feared that Swedish prosecutors, who wanted him on dubiously-timed rape accusations, would hand him over to the United States to stand trial on much more serious charges of espionage – carrying up to 175 years in prison combined.

This is me making my way to Woolwich Crown Court/Belmarsh Magistrate's Court earlier today for #JulianAssange's demonstrators, press and police fill the area. You can also see where people have been camping out from the night before.@SputnikInt pic.twitter.com/yOs3v51Yfo

Lisa Longstaff, a campaigner from UK-based group Women Against Rape, believes the allegations brought by two women in Sweden, which Assange flatly rejected, were “politically manipulated and corrupted”.

“Sweden deliberately kept those allegations open, tangling, as a way to smear and witch hunt him, demonise him together with the media,” she adds. The Swedish case was eventually dropped after a review of the evidence.

Assange is accused by the US of hacking into the Pentagon computer network together with intelligence analyst Chelsea Manning and stealing classified information that exposed US war crimes in Afghanistan and Iraq, including killings of civilians and a failure to address the widespread torture and mistreatment of prisoners by Iraqi police.

“This is really a death sentence, because they are saying that he could face 175 years in jail for journalism,” another campaigner says. “I mean and yet, the war crimes that he and Chelsea Manning and others have exposed go unpunished completely. And I think this really would be the death of journalism, it would be the end of free speech.”

Assange’s extradition trial begins today with a week of legal argument, followed by an adjournment until 18 May, when evidence will be presented in a three-week hearing.

Jim Curran, chairman of the Irish Civil Rights Association, says most extradition hearings in Her Majesty’s court involve people that are to be handed over to an EU member state, but Assange’s case is different.

He points out that the argument now will “concentrate on the political aspect of [the case] and the aspect of free speech. Because if Julian Assange is extradited to the US, it will mean that any journalist in any country who alleges [something] or a whistleblower who exposes a crime the agents of the US have committed… is likely to be extradited to the US and the Americans can issue an extradition warrant. So this question is much more serious than all of the other previous extradition hearings.”

Hundreds from all over the world protesting outside #Belmarsh prison, Magistrates Courts in defense of #JulianAssange , including the #YellowVests #FreeAssange@WSWSMedia@SEP_Britain pic.twitter.com/f5X8YAOHQX

Despite Assange not being an American citizen, US prosecutors may get jurisdiction over him by claiming that his actions occurred in the United States. His lawyers may seek protections under the First Amendment, but constitutional protections are rarely extended to non-US citizens, warns law professor Stephen I. Vladeck.

“You know there’s been all sorts of disinformation and, I suppose, downright lies actually about this whole situation, about Assange himself,” says demonstrator Joe Morrison. “But yes, I got involved because I realised that WikiLeaks had exposed the inner workings of imperialism and I thought, ‘well, it was about time’.”

She asks the question the US government doesn’t appear to be struggling with: “If Assange and a legal team don’t win this, you know, how anybody else is gonna be able to win anything in terms of sharing truthful and accurate information for the public good?”