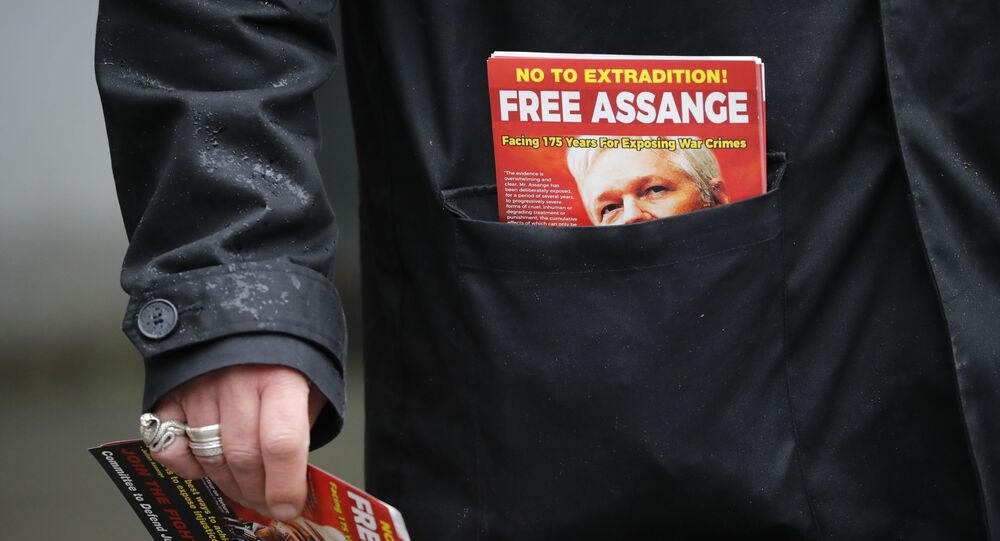 A hearing begins next week in London on whether Julian Assange should be extradited to the United States on charges of espionage. Emmanuel Macron could become the unlikely maker of Assange’s destiny as the WikiLeaks founder’s lawyers are going to submit a request for asylum to France.

With just days to go until Julian Assange’s legal battle over US extradition, observers worry that French President Emmanuel Macron will not give provide him with a helping hand.

“I do not think France will cooperate with asylum, and reason being is because Macron (for all his posturing) knows that he is not simply up against the Trump administration,” says American writer and investigative journalist Robbie Jaeger.

“He is up against the pressure of the US Intelligence State, which transcends the executive branch of the US government in terms of the pressure they are likely to apply to the French president.”

A defence team for Julian Assange said on Thursday that they will try to seek asylum in France for their client, who is facing up to 175 years in US jail if found guilty of multiple espionage charges. He is accused of working with US army whistle-blower Chelsea Manning to leak hundreds of thousands of secret documents about the US wars in Afghanistan and Iraq, including the mass killings of civilians and torture (and private security contractors trafficking children to have sex with Afghan soldiers).

Assange is currently on remand at the high-security prison Belmarsh in London. He was jailed for 50 weeks last May for jumping bail and seeking refuge in the Ecuadorian embassy in 2012. At the time, he was wanted by Swedish authorities on accusations of sexual assault which he described as politically motivated – and feared Sweden could extradite him to the United States.

The then UK home secretary, Sajid David, last year signed off a formal US request to have Assange extradited. If a British court rules that Assange should be handed over to the US, he will still have the right to appeal the decision to London’s High Court and then possibly to Britain’s Supreme Court.

Waiting for a miracle

Robbie Jaeger believes that Assange will be eventually extradited to the US “unless a miracle occurs and some very powerful, prominent, and internationally respected voices speak up.”

“While the Trump administration has tightened their grip on whistleblowers and those who publish their information, this practice dates back decades,” he says. “Our government has been out for Assange for years, and I fear that they will not accept an outcome other than him standing trial and being made an example of in front of our country to deter any further truth tellers from coming forward.”

Assange’s extradition hearing is scheduled to open at Woolwich crown court on Monday. The case will then be adjourned, to resume with three weeks of evidence on 18 May.

“I don’t know if Macron would go along with that (giving asylum to Assange) and get Trump upset, but that effort is not going to help him one way or the other in that extradition hearing next week,” says international law expert Francis Boyle of the University of Illinois College of Law.

“I’m just afraid the British establishment there is cooperating with the United States government. I could be wrong, but I certainly don't trust the British courts to do the right thing.”

Nozomi Hayase, a US writer and liberation psychologist who has been advocating against Assange’s extradition, is adamant that his case has “no legal ground”.

“Under UK law, an extradition request can be rejected if charges raised are related to political offenses,” she says.

“If the judge exercises the independence of their judicial authority and doesn't succumb to US interests, this case can be immediately dropped and Mr. Assange would be set free. The question to be asked is not about whether Assange could succeed in protecting himself, but whether or not the UK court can uphold rule of law and deliver justice.”

Hayase still holds out hope for France to give Assange asylum. She recalls WikiLeaks publications about mass surveillance programmes run by the US government, which exposed that the National Security Agency had spied on Macron’s predecessors (Hollande, Sarkozy and Chirac), French officials and the French ambassador to the United States.

She concludes: “It’s time for many US-allied European nations to examine critically the actions of the US government, including their war crimes in Iraq and Afghanistan which were revealed in many of WikiLeaks' released documents, and assert their own sovereignty to stand up for press freedom. I think France can lead the way.”