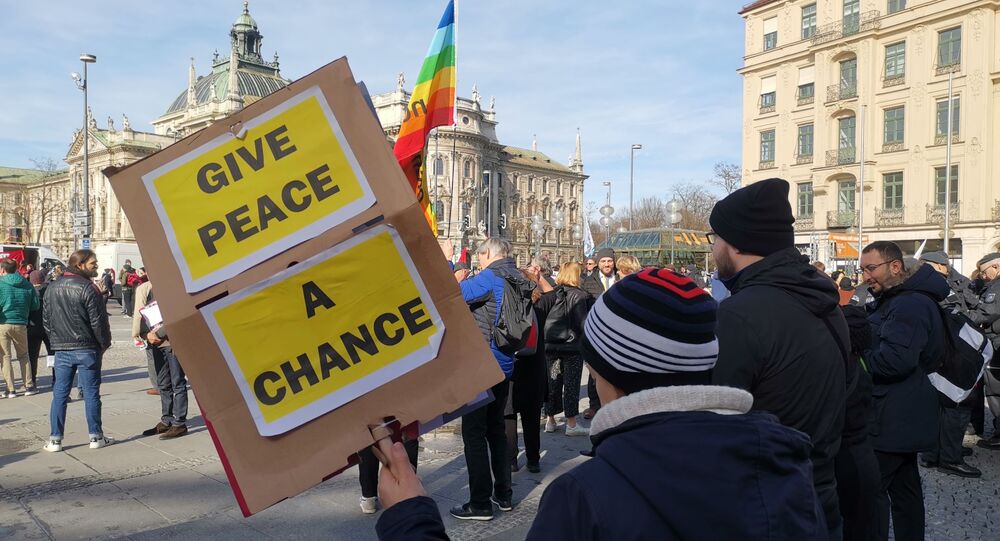 Diplomats, world leaders and top military commanders gathered in the Bavarian capital to discuss global geopolitical issues at the Munich Security Conference. The event was marked by a clash between its key influencers over Ukraine.

“The Western project” is in decay, and there are significant challenges that Europe and the US are facing because of redistribution of power between new powerful geopolitical players – that’s, probably, the main takeaway from this year’s Munich Security Conference (MSC), and the central topic of many discussions.

The organizers have defined the concept of “westlessness” in the conference’s annual report as a trend, by which not only the world is becoming less Western, but the West itself is also affected by this tendency in a major way, becoming less certain about its values and strategic path.

But it wasn’t only self-reflection and rhetorical questions that dominated the agenda. Pressing international issues, such as the conflicts in Syria and Lybia were discussed both during the main sessions and on the sidelines of the MSC.

While last year’s most controversial part of the conference were probably the remarks of the Polish Prime Minister Mateusz Morawiecki when he claimed that Jews were partially responsible for Holocaust – a statement which caused an outcry from Israeli politicians, this year’s conference was marked by controversial Ukraine-related events.

In their latest annual report the organizers of the Munich Security Conference listed Ukraine as one of the 2020s potentially dangerous regions, with the International Crisis Group pointing at a possibility of resumed hostilities in Donbass if plans for a more comprehensive ceasefire in the region eventually collapse.

But eventually, it was another publication about the situation in Ukraine, that made the headlines at this year's MSC.

The report was posted on the MSC official website. Former Ukrainian President Petro Poroshenko, who also attended this year’s conference, slammed the report, calling it a “Munich Conspiracy” against his country and claiming that the document is a result of a “Russian provocation”.

According to Poroshenko's press secretary, the politician demanded the organizers remove the document. The former Ukrainian leader immediately received support from the Atlantic Council and the US think-tank issued a counter-statement signed by 26 people, including former Undersecretary of State Paula Dobryansky and former US Ambassador to Russia Michael McFaul.

According to Russia’s Kommersant daily, the page of the conference's official website containing the MSC report was eventually taken down from the conference’ website, being replaced by the "Error 404" message, and later reappeared with the addition of the Atlantic Council’s counter-statement.

While Ukrainian President Zelensky was trying to make himself heard at the MSC, rushing from one meeting to another, it seems that his predecessor Poroshenko was equally active, but in a disruptive way – investigating “conspiracies” and seeking support from foreign leaders. pic.twitter.com/BJay61Hz7u

​Russian Foreign Minister Sergei Lavrov held several meetings on the sidelines of the MSC-2020, including talks with his US counterpart Mike Pompeo, which the American side preferred to call a “pull-aside”, after which, according to Russian Foreign Ministry spokesperson Maria Zakharova, Pompeo wished Lavrov “good luck” while leaving the Russian delegation room.

Russian Foreign Minister Sergey Lavrov held a series of meetings in Munich, including bilateral talks with Japanese, Turkish, Chinese, Iranian and EU top diplomats. He also met with NATO Secretary General Jens Stoltenberg and with the US Secretary of State Pompeo. pic.twitter.com/tXUs43FkS3

​Unlike Russia’s Foreign Ministry, the US State Department apparently kept quiet about Mike Pompeo’s closed-door meeting with Lavrov, leaving the American press wondering about the reasons for such secrecy.

This is abnormal behavior by the State Department. I traveled with three Secretaries of State. When they met with Russian foreign ministers, they always told the American people what they were doing — often in great detail https://t.co/AdBqMYwjNP

​On Saturday Russia’s top diplomat spoke at the conference, slamming NATO’s eastward expansion and this year’s DEFENDER-Europe manoeuvres – the third-largest military exercise on the continent since the Cold War, which the alliance is holding in April close to the country’s western borders:

“The lack of trust can be felt in European affairs. The increasing pressure of NATO and the expansion of the alliance to the east, the unprecedented maneuvers near Russia’s borders, the overblown defense budgets – it all generates unpredictability. The Cold War confrontation structure is being re-built using real “iron”. It is time to stop cultivating the phantom of the“Russian threat”, and any other threat for that matter before it’s too late. It’s time to remember what unites us.”

NATO’s eastwards expansion was one of the main concerns for activists who rallied in Munich against the MSC on Saturday. Many Europeans are concerned that the alliance’s DEFENDER-Europe maneuvers are provoking Moscow. pic.twitter.com/D8jHb3YkLk

​The Munich Security Conference was established in 1963, with Munich being the main location and several other cities around the world hosting the MSC side events. Russian delegations have been attending the conference since the 1990s, with Russian President Vladimir Putin visiting the MSC in 2007.