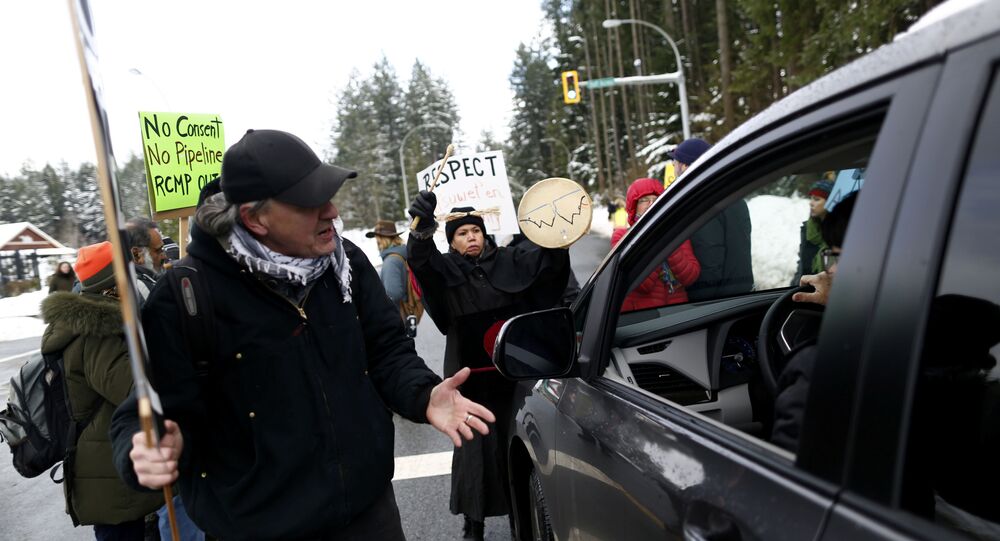 TORONTO (Sputnik) – Canada’s official opposition and the business community are sounding the alarm as the wave of protests across Canada in response to the eviction of indigenous activists protesting the construction of a gas pipeline on ancestral lands has effectively shut down the country’s railway system sparking talk of layoffs.

Conservative Party leader Andrew Scheer said that the “illegal” blockades that have crippled parts of the Canadian economy set a dangerous precedent and blasted Prime Minister Justin Trudeau for a lack of leadership in a time of national crisis, speaking before reporters on Friday.

“Quite frankly, this is getting ridiculous … Radicals activists, many of whom have no connection to the Wet’suwet’en [indigenous] people, are holding country’s economy hostage. Meanwhile, the prime minister has been out of the country on a vanity project to win a vote at the UN, neglecting his duties here at home,” Scheer said.

Last Friday, Trudeau embarked on a week-long mission to Africa, which, according to analysts, is part of the Trudeau government’s campaign for securing a seat on the United Nations Security Council.

The official opposition leader said that the round of protests is just a trial run for shutting down other projects by ideologically motivated protesters.

Scheer said that while the right to free speech and protest are core Canadian values and that the government cannot intervene in police operational matters, the country is, nevertheless, governed by the rule of law and that police should enforce it in this instance.

Scheer added that as a prime minister, he would direct the Royal Canadian Mounted Police (RCMP) to enforce the law.

Indigenous protesters reject the court order, with Wet'suwet'en Nation Hereditary Chief Na'Moks (John Risdale) of the Tsayu (Beaver) Clan telling Sputnik that the Canadian government and police are breaking federal and international laws by carrying out a raid on an indigenous campsite protesting against a planned gas pipeline.

The Wet'suwet'en nation – which covers 22,000 square kilometers (about 8,500 square miles) in the northern interior of British Columbia (BC) – has never ceded its territory, which was reaffirmed by a Supreme Court of Canada's decision in 1997 and recognized hereditary chiefs – a title passed down from generation to generation.

Indigenous claims are also supported by international law as Article 10 of the UN Declaration on the Rights of Indigenous Peoples (UNDRIP) stipulates that indigenous peoples shall not be forcibly removed from their lands or territories. The BC government adopted the UN document in November. And while the federal government has refused to follow suit, it has rescinded its objector status to the convention.

Asked whether further police intervention could spark violence, Scheer said that the risk of escalating tensions grows with every day of inaction. The head of the conservative caucus added that the real escalation is shutting down a whole sector of the economy, which will inevitably lead to job cuts.

On Thursday, in a statement, the Canadian National Railway (CN Rail) said that any long-term shutdown will “imminently lead to temporary layoffs.”

On Wednesday, in a letter addressed to Minister of Transport Marc Garneau and Minister of Innovation, Science and Industry Navdeep Bains, the Canadian Chamber of Commerce urged the government to take action and end the blockades without undue delay.

In a series of interviews across Canadian networks, the country’s top executives all expressed similar fears, with Don Walker, chief executive officer of Magna International, telling BNN Bloomberg that the crisis is “a good case of insanity.”

The protests began last Thursday in response to a RCMP operation to enforce a court order against those interfering with the Coastal GasLink (CGL) pipeline project.

Solidarity protests began in the Vancouver metropolitan area, but following a wave of arrests in British Columbia that saw more than 80 protesters detained at the campsite and their sympathizers in the Vancouver area, the protest spread to other parts of Canada, including Ontario, where a group of indigenous protesters shut down Canada’s busiest railway corridor between Toronto and Montreal.