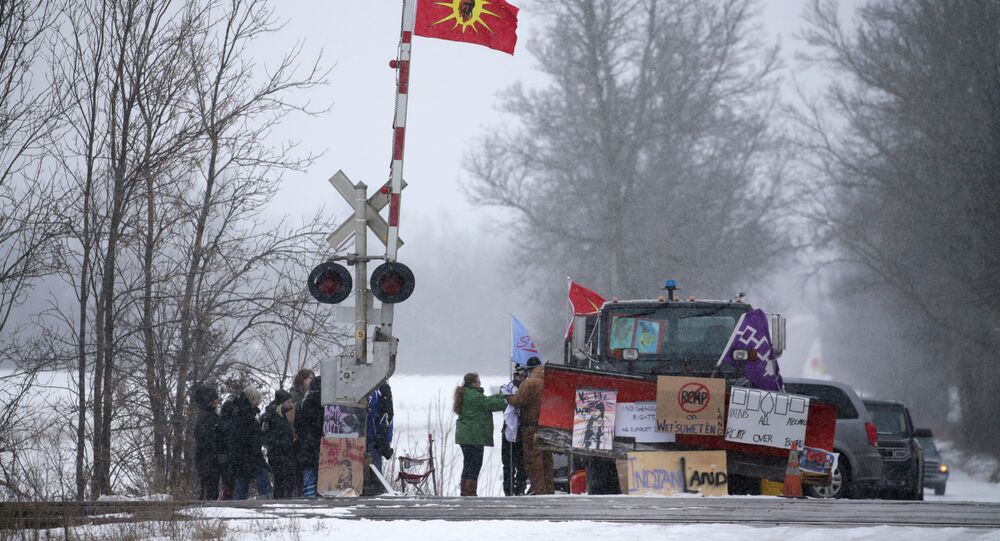 The company on Thursday stated that the measure was imposed after "an advisory from the infrastructure owner" to stop all operations across the nation, prompting Canada's Via Rail to immediately "cancel its services".

According to media reports, Canada’s busiest railway corridor is currently blocked by indigenous activists protesting the construction of a mammoth fossil-fuel infrastructure project in British Columbia (BC) - the Coastal GasLink (CGL) pipeline. Via Rail vowed in the statement to provide full reimbursement to all passengers for all canceled trips due to the ongoing protest.

#BREAKING: here’s the official statement from @VIA_Rail. All trains cancelled until further notice, across Canada: pic.twitter.com/qRBUogUB6H

“Passengers are being informed that as of 4pm EST, there will be no more train departures. Upon infrastructure owner instructions, all VIA Rail trains currently en route will be brought to the closest major train station. We understand the impact this unfortunate situation has on our passengers and regret the significant inconvenience this is causing to their travel plans”, VIA Rail said in the statement.

Another major railway carrier, Canadian National Railway Company (CN Rail), announced a shutdown of operations due to the blockade of railway traffic in the eastern part of the country.

#BREAKING: CN Rail says it will begin a progressive shut down of operations in Eastern Canada because of blockades across Canada.

CN is warning that its shut down may lead to layoffs in Eastern Canada.

Oil pipeline protesters took decisive action after the Royal Canadian Mounted Police (RCMP) began an operation to enforce a court order against those protesting by interfering with the pipeline's construction. The RCMP was authorized to raid makeshift checkpoints of small groups of indigenous tribespeople, who are said to have initiated the protest movement. The raids have sparked widespread outrage in the nation, attracting more Canadians to protest the giant fossil-fuel pipeline project.

Protesters have reportedly blocked the railway along the Toronto-Montreal corridor, the only freight and passenger rail link between western and eastern Canada. There is reportedly an additional blockade in northern British Columbia, between Prince George and Prince Rupert.

Local activists and some members of the Canadian media report that the recent police raids against indigenous Canadians - the Wet'suwet'en nation - are illegal, alleging that Canadian authorities have been mistreating members of the indigenous tribes that once inhabited all of Canada's British Columbia.

© AP Photo / Evan Vucci
Canada Prime Minister Trudeau Approves Trans Mountain Pipeline Expansion
The mammoth petrochemical pipeline is intended to be constructed on territories claimed by the Wet'suwet'en and other indiginous tribal nations. This area covers some 22,000 square kilometers (8,000 miles) in the northern interior of BC, and has never ceded its territory, an assertion reaffirmed in a 1997 Supreme Court of Canada decision and recognized hereditary chiefs – the title passed down from generation to generation.

Indigenous claims are supported by international law, including Article 10 of the UN Declaration on the Rights of Indigenous Peoples (UNDRIP), which stipulates that indigenous people cannot be forcibly removed from their lands or territories. The BC government adopted the UN charter in November 2019, while the federal government has refused to do but has rescinded its objector status to the convention.

Last month, the UN Committee on the Elimination of Racial Discrimination (CERD) promised to continue its dialogue with Canadian authorities regarding the fossil fuel pipeline and others in BC.