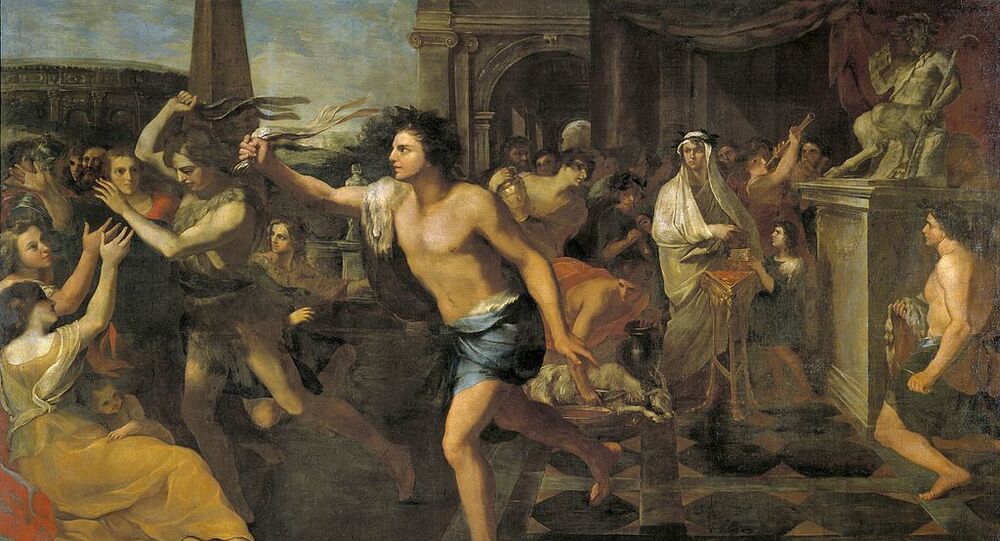 Animal Sacrifices and a Beheaded Priest: The Gory Story of St. Valentine’s Day

St. Valentine’s Day has been a celebration of love for centuries, but it hasn’t always been about cartoon-themed classroom cards, romantic dinners and cuddly evenings.

Tomorrow is 14 February, which means that the world is preparing to mark its most romantic international holiday.

While nowadays the traditional elements of Valentine’s Day are thoughtful gifts – whether jewelled, floral, plush or chocolate, heartfelt cards and swoon-worthy bouquets, people used to be much less romantic back in the day.

Although Valentine’s Day owes its name to a Christian saint, it is widely claimed to have originated from the ancient Roman festival of Lupercalia – despite the lack of evidence of direct links between the Roman tradition and the holiday as we know it.

Lupercalia, observed annually from 13 to 15 February, was a pastoral festival launched to celebrate spring and fertility. It started off in the Lupercal (hence the name), the sacred underground cave where Romans believed a she-wolf nursed Romulus and Remus, the city’s twin founders.

Priests would gather there to slaughter two male goats and a dog: the goats for fertility and the dog for purification. After the rite was over, they would cut the goatskin into pieces, wearing some of them and holding others in the hands. They would then run half-naked around the city, whipping or touching anyone they could – especially women – with the hide to make them more fertile.

One presumed element of this fete was a matchmaking lotto in which men drew women’s names out of a vessel and remained sexual partners with them during the festival. Some modern researchers, however, dispute that account.

“Although there probably was wild partying, there is no reliable evidence that it involved a ritualised time when men drew the names of women, or that it involved the pairing of lovers,” Methodist minister and author Bruce David Forbes writes in his book ‘America's Favorite Holidays’.

“That claim came much later, as a creative addition, after the emergence of a romantic Valentine’s Day.”

The earliest historical record of Lupercalia is that of the 3rd century B.C., although historians say it probably pre-dated the very foundation of Rome.

Lupercalia had been celebrated – with animal sacrifices eventually being abandoned – until the end of the 5th century A.D., when Pope Gelasius I declared 14 February as Valentine’s Day.

The name of the holiday as we know it is associated with the Christian martyr who had incurred the wrath of the Roman emperor Claudius II by secretly marrying couples to spare the men from war (the emperor apparently prohibited young men to marry because he believed that married men would make bad soldiers).

Valentine was beheaded around the year 270 A.D. The Roman Catholic Church later recognised him as a saint and continues to venerate him on 14 February.

However, the earliest account of Valantine’s Day as a romantic holiday is from 14th century, when Geoffrey Chaucer made a romantic association in his poem ‘The Parlement of Foules’, published sometime in the 1380s.

He wrote: “For this was on St. Valentine's Day, when every bird cometh there to choose his mate.”

There is still a dispute going on over which Valentine – and which date – Chaucer was referring to. Some believe the line was actually about St. Valentine of Genoa, whose feast day was on the 2nd or 3rd of May.

Chaucer’s poem was dedicated to the marriage of King Richard II of England to Anne of Bohemia. The two got engaged on 2 May, so the assumption is that Chaucer could have just picked a saint whose feast occurred on that day.

“In medieval studies there is neither consensus nor continuing debate on the question which St. Valentine Chaucer had in mind,” Professor Steven Justice of the University of California, Berkeley, told Mental Floss, adding that there is no “conclusive evidence” to support either option.