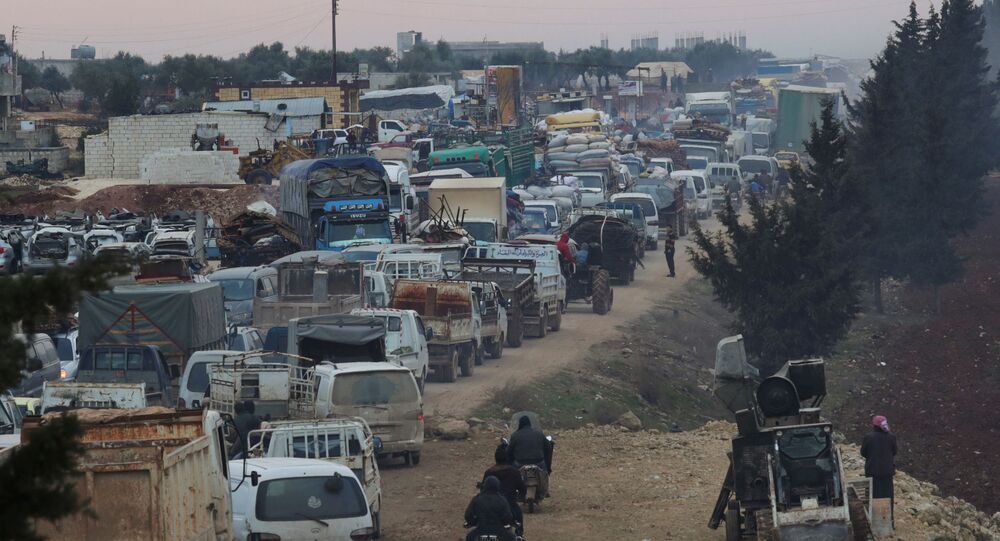 Earlier in the day, Turkish President Recep Tayyip Erdogan accused Moscow and Damascus of attacking civilians in Idlib, mere days after Turkey claimed it had lost five soldiers in shelling by the Syrian Army.

Commenting on the recent deterioration of the situation in Syria's Idlib de-escalation zone, the Russian Defence Ministry stated that the crisis has worsened because militants are obtaining weapons and ammunition from across the Turkish border.

The ministry noted that the attacks by Syrian militants on neighbouring peaceful areas prompted the Syrian government forces to respond.

"The civilians are suffering because of provocations in Idlib de-escalation zone by the terrorist groups that use 'live shield' against the Syrian government forces. The situation is exacerbated by the arrival of weapons and ammunition in the de-escalation zone via the Syrian-Turkish border, as well as the arrival of Turkish armoured vehicles and troops in the province of Idlib," the Russian ministry said in a press release.

"The real reason of the crisis in Idlib de-escalation zone is, unfortunately, the failure of our Turkish colleagues to adhere to their commitments on separating moderate opposition fighters from terrorists of Jabhat Nusra (banned in Russia) and Hurras ad-Din (linked to Al Qaeda, which is banned in Russia)," the press release read.

© AP Photo / Murat Cetinmuhurdar/Pool Photo
Ankara is Determined to Push Syrian Army Beyond Turkish Observation Posts in Idlib - Ergodan
Syrian government forces, supported by Russia, have recently been increasing their efforts to expel terrorists from Idlib, the only remaining militant stronghold in Syria.

At the same time, over the past two days, the Turkish Defence Ministry has issued statements, saying the country's military has been conducting retaliatory attacks on Syrian government forces.

According to the ministry's data, on Monday, the Turkish army struck 115 Syrian government targets, destroying 101 of them, while on Tuesday it managed to hit 51 government units.