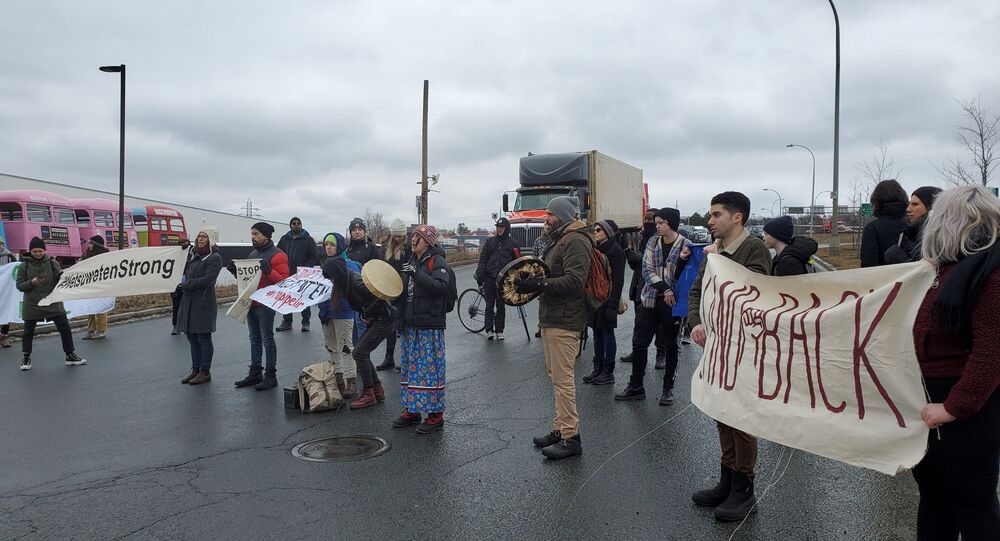 TORONTO (Sputnik) - Protests following the eviction and detention of Indigenous activists blocking the construction of a gas pipeline in northern British Columbia continue to spread across Canada.

Last Thursday, the Royal Canadian Mounted Police (RCMP) began an operation to enforce a court order against those interfering with the Coastal GasLink (CGL) pipeline project. Since then more than 80 protesters at the campsite and their sympathizers in the Vancouver area have been detained across British Columbia.

Part of the growing wave of protest is a blockade that has shut down Canada’s busiest railway corridor. Such action is damaging the country’s reputation, the Canadian National Railway (CN Rail) said in a statement on Tuesday.

"Hundreds of trains have been canceled since the blockades began five days ago. The impact is also being felt beyond Canada’s borders and is harming the country’s reputation as a stable and viable supply chain partner," the statement read.

Protesters have been blocking the railway along the Toronto-Montreal corridor, which is the only link between Western Canada and Eastern Canada. There is an additional blockade in northern British Columbia between Prince George and Prince Rupert.

According to CN, the blockades are not only impacting Canadian passenger and freight traffic along this corridor but disrupting the supply chain system to midwestern US states.

Elsewhere, in Saskatchewan, according to the CBC, a group of 75 protesters shut down a major artery in Regina, leading to heated confrontation in which a car forced its way through the crowd. No injuries were reported.

In Ottawa, activists occupied the lobby of Department of Justice building, where they, during a press conference, have given the Attorney General and Minister of Justice 24 hours to outline a course of action to address the concerns of the Indigenous people, otherwise, in their words, there can be no path forward to reconciliation.

The protests are fueled by centuries of perceived mistreatment of Indigenous Canadians by the predominantly Eurocentric population and government of Canada, and the, alleged, brazen illegality of the court decision.

On Friday, Wet'suwet'en Nation Hereditary Chief Na'Moks (John Risdale) of the Tsayu (Beaver) Clan told Sputnik that the Canadian government and police are breaking federal and international laws by carrying out a raid on an indigenous campsite protesting against a planned gas pipeline.

"They [Canadian authorities] are breaking their own law and international law," Chief Na'Moks said, adding that his people "are doing the right thing, at the right time, for the right reasons" and that their struggle embodies everything Canada is supposed to stand for - preservation of the environment, freedom, and democracy.

The Wet'suwet'en nation - which covers 22,000 square kilometers in the northern interior of BC – has never ceded its territory, which was reaffirmed by a Supreme Court of Canada decision in 1997 and recognized hereditary chiefs – a title passed down from generation to generation.

Indigenous claims are also supported by international law - Article 10 of the UN Declaration on the Rights of Indigenous Peoples (UNDRIP) stipulates that Indigenous peoples shall not be forcibly removed from their lands or territories. The BC government adopted the UN charter in November, while the federal government has refused to do, but has rescinded its objector status to the convention.

Last month, UN Committee on the Elimination of Racial Discrimination (CERD) Chairperson, Noureddine Amir, told Sputnik that the international governing body will continue to engage in dialogue with Canadian authorities regarding this project and others in BC. Amir's statement followed a December report, in which CERD renewed calls for the Canadian government as well as pipeline owners and operators to halt construction on a number of projects, including the CGL until proper consultation can occur with all stakeholders.