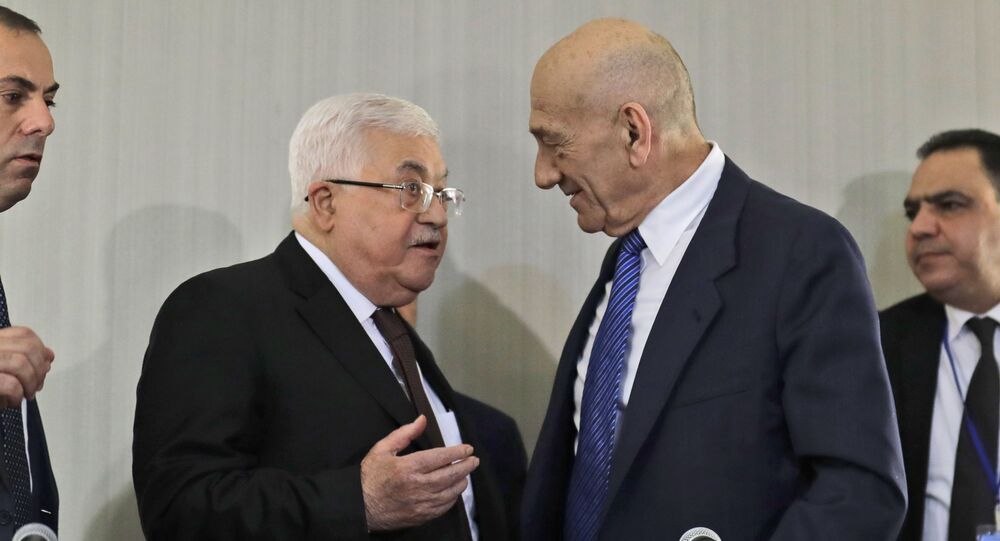 Palestinian Authority (PA) President Mahmoud Abbas earlier on Tuesday slammed the Middle East peace plan promoted by US President Donald Trump as 'the deal of the century', urging the United Nations Security Council (UNSC) to reject what the former characterized as a present to Israel.

Abbas stressed, while speaking at the UNSC, that the Trump administration "cannot be the sole mediator” and called upon the UNSC to convene an international conference on Israeli-Palestinian reconciliation.

Following his UNSC address, Abbas later in the day held a press conference in New York with former Israeli Prime Minister Ehud Olmert. Abbas emphasized that he is willing to engage in peace talks but only on the terms of a plan drafted in 2008 during Olmert's tenure as Israeli prime minister.

“As I said today at the Security Council, I am fully ready to resume negotiations where we had left it with Mr. Olmert under the umbrella of the international quartet, and not on the basis of the plan of annexation and legalization of settlements - destroying the two-state solution [...] We have worked so closely together to achieve the historic peace treaty [...] We have come a long way and covered all core issues of permanent status”, Abbas said, cited by the I24 News media outlet.

During the news conference, Abbas again rejected the Trump "deal of the century", pointing out that deal will push "the region and its people further and further into the cycle of violence and chaos”.

Following the conclusion of Abbas' remarks, Olmert expressed his gratitude to the Palestinian leader for his commitment "to defend everyone against terrorist activities".

"I am very happy that we heard today again a repeated commitment by the president of the Palestinian Authority [to] make every possible effort, together with the Israeli government, to defend everyone against terrorist activities”, Olmert said, cited by I24 News. Olmert noted that Abbas is the “only partner in the Palestinian community that represents the Palestinian people and has manifested that he is prepared to negotiate”.

Olmert observed that, despite significant differences across a range of views, Abbas "is a man of peace, he is opposed to terrorism. It is important for me”.

'Deal of the Century'

On 28 January, Trump unveiled his administration's Middle East peace plan, which envisions Israel extending its sovereignty in the West Bank and the Jordan Valley and making Jerusalem an undivided Israeli capital.

The Trump peace plan also envisions the Palestinians doubling the territory they currently hold and receiving $50 billion in investment to spur the economy. The plan also stipulates, however, that Palestinian refugees will not be permitted to return to their homeland.

Trump's "deal of the century" has nonetheless triggered a strong backlash within the Palestinian National Authority. The Arab League also rejected the peace plan, calling it "unjust", and urged the international community to counter any attempt to implement it.

In 2008, Abbas and Olmert held a closed-door meeting in a bid to outline a possible peace deal and draft a form for an independent Palestinian state. The talks, however, reportedly made little progress, as Israel conducted an offensive in the Gaza Strip in response to attacks by militants from the enclave.

At the time, Abbas also doubted that any peace agreement could be reached with Tel Aviv by the end of 2008.

UN Secretary-General Antonio Guterres during the UNSC meeting on Tuesday said that the UN remains committed to resolving the Israeli-Palestinian conflict based on a two-state solution within recognized borders on the basis of the pre-1967 Six-Day war borders.

Within the framework of any settlement process with Israel, Palestinians demand that borders between the two sovereign states pass along lines that existed prior to Tel Aviv's 1967 Six-Day War, with a possible exchange of territories. Palestinians intend to create their own state in the West Bank and the Gaza Strip, with their capital in East Jerusalem.

Tel Aviv has consistently refused to return to the 1967 borders or to share Jerusalem with any other power or religion, declaring the city its eternal and indivisible capital. Israel seized then Jordan-controlled East Jerusalem during its 1967 Six-Day War.

The international community does not recognize Israel's land seizures and believes the status of Jerusalem must be agreed upon with the Palestinians, who claim its eastern part as the capital of their state.

In December 2017, Trump recognized Jerusalem as the Israeli capital, sparking outrage among Palestinians and much of the Arab world, as well as surprising US allies.

© REUTERS / Mohamad Torokman
US Tried to Contact PNA Before Peace Plan Release, Abbas Refused - Palestinian Ambassador
Another issue said to seriously hamper the peace process is Israel's refusal to recognize the Palestinian National Authority as a sovereign nation. The Palestinian Authority, which remains only partially recognized as a state, in turn, claims the territories of the Gaza Strip and the West Bank, including East Jerusalem.

In 1947, the United Nations inculcated a plan to end the conflict, giving most of the West Bank and Gaza to Palestinian Authority. Israel, in a military attack, seized those territories in 1967 but claims to have withdrawn all its forces from Gaza in 2005.

In this context, the international community has put forward a so-called two-state solution to the conflict, suggesting that both states deserve the right to independence and insisting that the Palestinian Authority be recognized as a sovereign nation within its pre-1967 borders.