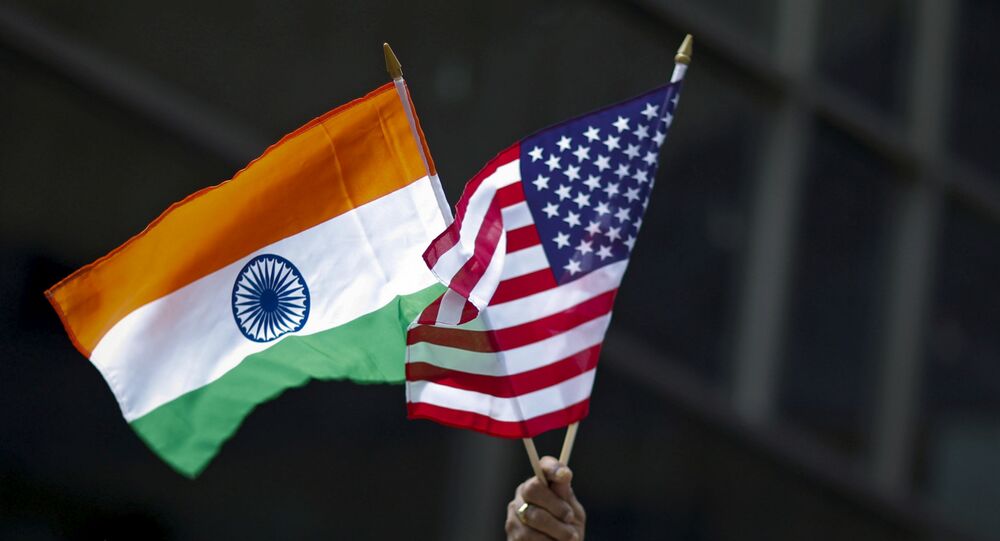 New Delhi (Sputnik): India and the US will discuss a range of issues during President Donald Trump’s maiden visit later this month, including lingering trade and defence sales. Regarding the 24-25 February visit, the Indian Foreign Ministry said it could be an opportunity “to review progress in bilateral ties and strengthen strategic partnership”.

India and US are set to witness a reset in relations when US President Donald Trump arrives in New Delhi later this month. While many issues will be on the table for the two leaders, it is also viewed as an opportunity for Trump to woo his vote bank back home by acting in a presidential manner.

The Indian Foreign Ministry on Tuesday revealed “President Trump will attend official engagements in New Delhi and Ahmedabad, and interact with a wide cross-section of Indian society”.

Sources said Modi and Trump will also inaugurate world's largest stadium-- Sardar Patel Stadium—in Modi’s home state Gujarat’s Ahmedabad city, where the US president may address thousands of people in an event similar to what was organised in Houston city: the ‘Howdy Modi’ of September 2019.

The Houston event was described as the largest-ever gathering (50,000 Indians) with a foreign political leader in the US.

Trump joined Modi at the Houston rally, which, political analysts claimed, was an attempt to garner the support of 1.2 million Indian Americans eligible to vote in the November 2020 US presidential elections.

A significant percentage of Indian Americans are said to originally hail from Modi’s home state of Gujarat. With the rally in this Indian state’s city of Ahmedabad, Trump could use the opportunity to highlight issues that serve his political interests in the US.

Over 80 percent of Indian Americans are said to have voted for 2016 Democratic presidential candidate Hillary Clinton, according to polling by the Asian American Legal Defence and Education Fund.

Despite claiming that a strategic partnership between the US and India is based on “trust, shared values, mutual respect and understanding”, there are several issues that have remain unresolved for the past three years, according to the Indian Foreign Ministry.

Trade disputes began after the Trump administration identified India as a country that in 2016 had a trade surplus ($31 billion) with the US. Expressing concern, Trump suggested that India had been the "tariff king of the world". The government of Narendra Modi  has consistently denied Trump's accusations.

In last three years, trade concerns including the Generalized System of Preference, a price cap on medical devices and data localisation have dominated the discussion between the two countries.

Despite several rounds of talks between commerce departments of the two countries, the concern related to higher tariff, export subsidies, and data localisation became overwhelmingly difficult to solve and were moved to the side in favor of more attainable goals. Now, it is hoped that the two sides could sign a lesser trade agreement to give face to the visit.

An “India-US trade pact is almost finalised. A majority of the trade issues have been resolved in the negotiations between the two nations,” according to an Indian Commerce Ministry official who requested anonymity speaking to Sputnik on Tuesday, adding that an announcement of a trade agreement is likely during the Trump visit.

The Indian Commerce Ministry imposed higher tariffs on 28 US goods in retaliation for a 10 percent duty hike on Indian steel and aluminium and a withdrawal of preferential access for Indian products in 2019.

India can be expected to face criticism on announcing higher duties on the import of medical equipment during the 1 February budget presentation.

Despite selling some $17 billion of US-made weapons to New Delhi between 2007-2017, Washington has not been able to conclude any military sales with New Delhi for last three years. Major projects in the pipeline include a $2.6 billion multi-role 24 MH-60R Seahawk helicopter for the Indian Navy, a $1.867 billion integrated air defence weapon system featuring the National Advanced Surface to Air Missile System-II (NASAMS), and the Poseidon-8I long-range maritime patrol aircraft.

The US State Department approved the integrated air defence weapon system on 10 February, two weeks ahead of Trump’s visit.

“The procurement of the NASAMS was in the offing for some time now and essentially it appears to be for the national capital Delhi.  This would imply that either the India’s state funded DRDO developed Missile Defence system is seen as not reliable enough to cover Delhi or this is being planned for other major metros as Mumbai,” Rahul K. Bhonsle, a defence analyst and retired Indian Army Brigadier, said.

The US approved the sale of 24 MH-60R Seahawk helicopters in April 2019, but the signing of the contract has been delayed over the final price. It is expected that the two countries may sign the weapons contract during the upcoming Trump visit.

In January this year, a US State Department official made Washington’s position clear that New Delhi has not been granted any guarantees that it won't be punished with sanctions (CAATSA) for making the purchase.

After India and the US signed an Industrial Security Annex (ISA) during the second 2+2 ministerial dialogue in December 2019, a US State Department official suggested that India should purchase American weapons systems, rather than Russia’s S-400.

A senior State Department official said: “The S-400 has been a longstanding issue. We have concerns over our ability to achieve the inter-operability that we seek with India.”

Besides offering the US missile defence system, the Trump administration may offer India other military assets that New Delhi currently purchases from Russia.