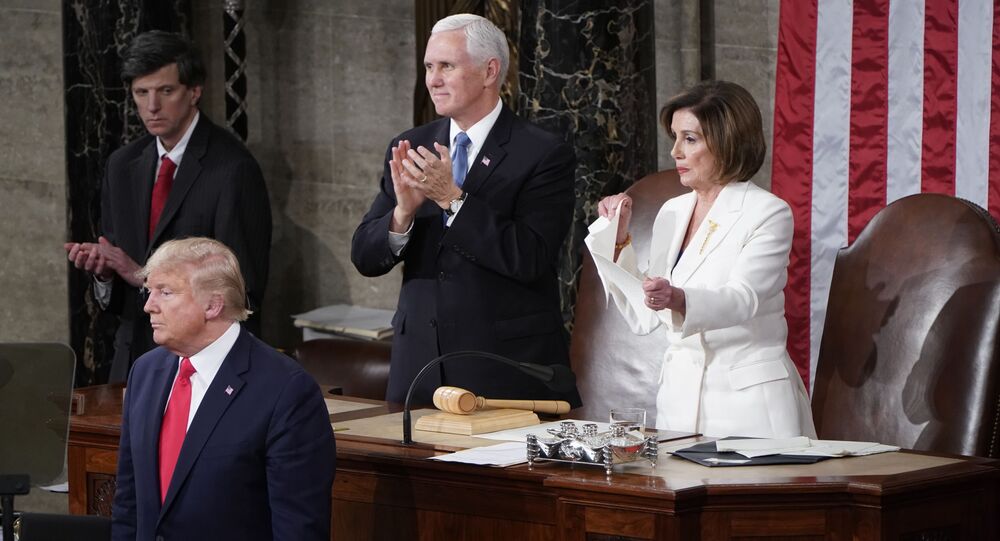 On Friday, Donald Trump claimed that House Speaker Nancy Pelosi “broke the law” by ripping up her copy of the US President’s State of the Union speech moments after he concluded it, on 4 February.

Twitter and Facebook have refused to heed a a request from Nancy Pelosi's  office to remove an altered video of the US House Speaker ripping up her copy of POTUS’ State of the Union speech (SOTU).

The footage was edited to make it look like Pelosi ripping up the document the moment President Donald Trump was saluting a Tuskegee airman, not at the end of his address.

Pelosi's office demanded that the video, which was posted by President Donald Trump on Friday and titled “Powerful American stories ripped to shreds by Nancy Pelosi,” be removed from both social platforms.

Drew Hammill, Pelosi’s deputy chief of staff, argued that “the latest fake video of Speaker Pelosi is deliberately designed to mislead and lie to the American people”.

“[…] Every day that these platforms refuse to take it down is another reminder that they care more about their shareholders’ interests than the public’s interests.  The American people know that the president has no qualms about lying to them – but it is a shame to see Twitter and Facebook, sources of news for millions, do the same”, Hammill tweeted.

Netizens have, meanwhile remained at loggerheads over the video, with some calling the clip ‘pathetic’ and others insisting that Pelosi should be removed from Congress.

Nancy Pelosi needs to be removed from congress. There is something mentally not right with her.

Nancy Pelosi should be censured for the way that she behaved, her actions are inexcusable!

She slapped all Americans in the face with her despicable behavior.

She ripped your state of mind.

Trump, for his part, told reporters on Friday that it was illegal for Pelosi to destroy her SOTU copy.

“I thought it was a terrible thing when she ripped up the speech. First of all, it’s an official document. You’re not allowed. It’s illegal what she did. She broke the law, but I haven’t been asked a question other than a lot of people that viewed it, they couldn’t believe that she did it. I thought it was terrible, I thought it was very disrespectful to the chamber, to the country”, he pointed out.

The statement came after Pelosi demonstratively ripped up the document moments after he concluded it on Tuesday, explaining her gesture to Fox News later by saying that “it was the courteous thing to do considering the alternatives”.

.@SpeakerPelosi tears up of State of the Union speech.#SOTU #SOTU2020 pic.twitter.com/sIpi4G7KsL

In response, the White House referenced several of the guests of honour that the President had introduced during his State of the Union address.

“Speaker Pelosi just ripped up: One of our last surviving Tuskegee Airmen. The survival of a child born at 21 weeks. The mourning families of Rocky Jones and Kayla Mueller. A service member's reunion with his family […] hat's her legacy”, the White House tweeted.

It was Pelosi who initiated impeachment proceedings against Trump in September 2019, when the Democrats accused the US President of “pressuring” Ukrainian counterpart Volodymyr Zelensky to investigate alleged corrupt activities by former Vice President Joe Biden and his son.

On 5 February, the US Senate has voted in favor of acquitting US President Donald Trump on both articles of impeachment: abuse of power and obstruction of Congress.