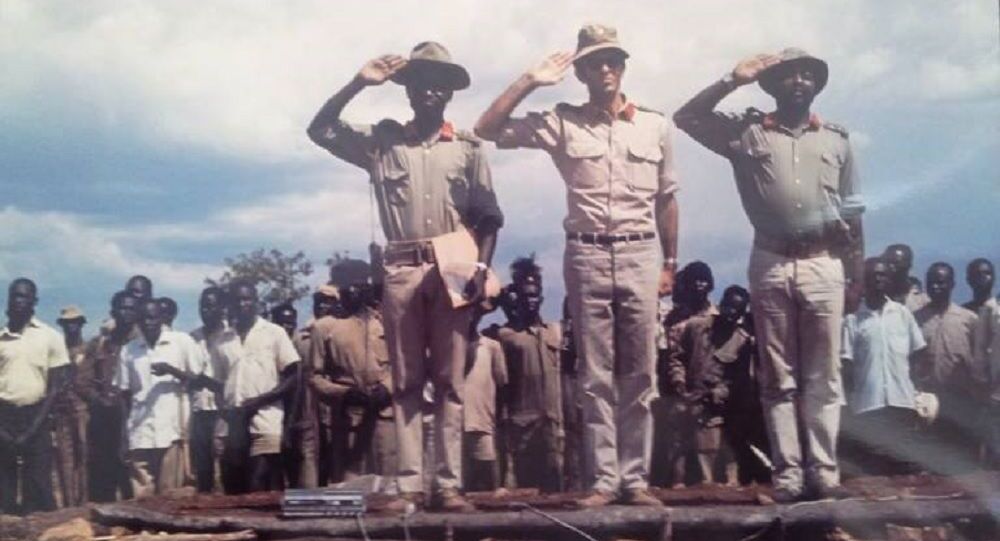 On Monday, in an unprecedented move, Sudanese head of state Abdel Fattah al-Burhan met with Israeli Prime Minister Benjamin Netanyahu in Uganda, calling the get-together an attempt to establish “a relationship of goodwill” and form a “consensus…to halt all mutually hostile actions and positions”.

On the occasion of what appears to be a new, positive chapter in relations between Israel and Sudan, a country with which Tel Aviv has poor relations for decades, Haaretz contributor Yossi Melman recalled that Israel’s intelligence services have played an active role in trying to undermine Khartoum’s nationalist, Pan-Arabist sentiments going back to the country’s independence.

Sudan’s relations with Israel got off to a rocky start from Israel’s very inception, with Sudan’s colonially-administered government sending an expeditionary force of army volunteers to fight in the 1948 Arab-Israeli War. Later, in 1967, Sudan again attempted to send troops to help their Egyptian allies, but failed to arrive at the front in time before a ceasefire was signed. Relations remained poor for most of the fifty years since, with Israel clandestinely supporting Christian militias fighting Khartoum in the first Sudanese civil war between 1969 and 1972, and the second civil conflict between 1983 and 2005.

Israel’s efforts to influence Sudanese politics began in the 1950s. Melman recalled that in 1956, Israeli diplomats met secretly in London with representatives of the Umma, a Sudanese nationalist, Islamist party opposed to Egyptian President Gamal Abdul Nasser’s Pan-Arabism, nationalism and socialism, with the Israeli side providing financial assistance to try to stop the country from remaining in Cairo’s orbit and joining the Arab League.

And this is from 1956: the Israeli embassy in London reports on its links with members of the Sudanese Umma Party, and on Israel's plan to invite them to Israel and extend financial support to the party in order to stop Sudan from joining the Arab League. pic.twitter.com/t10Fwa4ppx

Following Sudan’s independence from Anglo-Egyptian administration in January 1956, the responsibility for working with Sudan’s opposition was transferred to Mossad.

These efforts were hampered in 1958, when, amid infighting between Sudan’s political forces, General Abrahim Abboud staged a coup d’état, launching an ambitious economic development plan, reaching an agreement with Egypt on sharing the waters of the Nile River, dissolving political parties, including the Umma, and cutting off all prospects of ties with Israel. In 1964, civilian government was restored, but ties, even clandestine ones, became nonexistent, according to Melman.

“With this reality in mind, Israel replayed the old dictum of my enemy’s enemy is my friend, and set to work to build secret ties with forces in opposition to the Sudanese government,” Melman wrote, recalling a Mossad operation led by Lt. Col. David ‘Tarzan’ Ben Uziel to ship arms to South Sudanese tribes.

“Using air strips and bases in Uganda and Kenya, Israeli air force pilots dropped ammunition and weapons to assist the rebel forces of General Joseph Lagu, who also traveled to Israel and met with Prime Minister Gold Meir.” Lagu, a member of southern Sudan’s Madi ethnic group, defected from the Sudanese army in 1963 and formed a guerilla group, fighting against Khartoum in the first civil war, and cultivating officers who would kick off the second civil war in the mid-1980s.

During their clandestine operations in Sudan, Uziel’s agents took part in sabotage missions, bombing bridges along the Nile and attacking Sudanese troops. 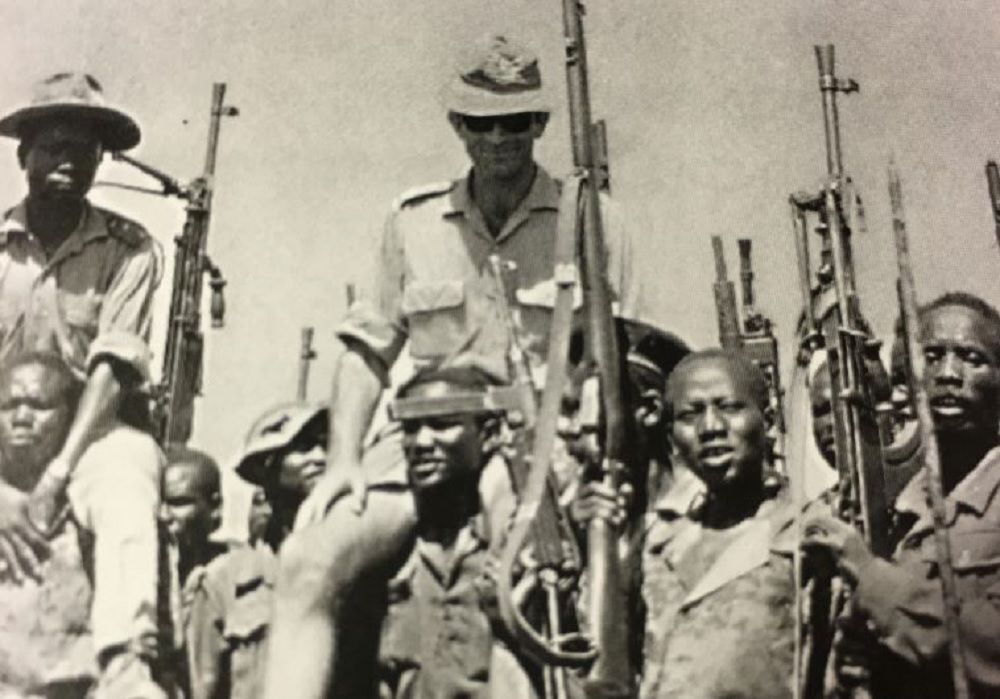 After the end of the first Sudanese civil war in 1972, the Mossad and the Israeli Navy used Sudanese territory between 1977 and 1980 in their dramatic operations to smuggle some 17,500 Jews out of Ethiopia to Israel.

Later, in 1981, Israeli officials once again turned to Sudan, this time due to a plot to use the country as an arms depot to for holding weapons to help overthrow Ayatollah Khomeini’s fledgling Islamic Republic in Iran. That plot, sponsored by a Saudi businessman, proposed the shipment of Israeli weapons to Sudan, and paying off Sudanese President Gaafar Nimeiry with the weapons intended to make their way to Iran, and assisting a coup d’état to install deposed Shah Mohammad Reza Pahlavi’s son in power. Some of the weapons were also planned to be diverted to Chad, to create a revolutionary situation in that country amid Israeli hopes to receive access to its uranium stocks. The plot was sponsored in Israel by then-Israeli Defence Minister Ariel Sharon, behind Mossad’s back, and when the intelligence agency found out about it, Prime Minister Menachem Begin torpedoed it.

Ariel Sharon, then Israel's Defence Minister, describes in his biography his meeting with Sudanese president Nimeiry in Kenya, early 1980s. Daniel arap Moi and Saudi businessman Adnan Khashoggi coordinated the meeting. The latter had some grand ideas about Iran... pic.twitter.com/Qcz13bth7I

Mossad returned to using Sudan to smuggle Jews out of Ethiopia in 1984, reportedly transferring a $30 million payoff to the country’s leaders, with the funds provided by the American Jewish Joint Distribution Committee, a Jewish relief organisation based in New York City, and using Khartoum’s international airport and a Belgian Jewish-owned airline to ship the smuggled Jews to Israel in an operation dubbed ‘Operation Moses’. That operation led to some 30,000 Jews being brought to Israel. Nimeiry was ousted from power in 1985, and replaced by Umma leader Sadiq al-Mahdi, “Israel’s old friend.” Al-Mahdi was himself ousted in 1989 by Gen. Omar al-Bashir, who continued to rule the country until April 2019, again breaking ties with Israel and working to improve relations with Tel Aviv’s Iranian adversaries. 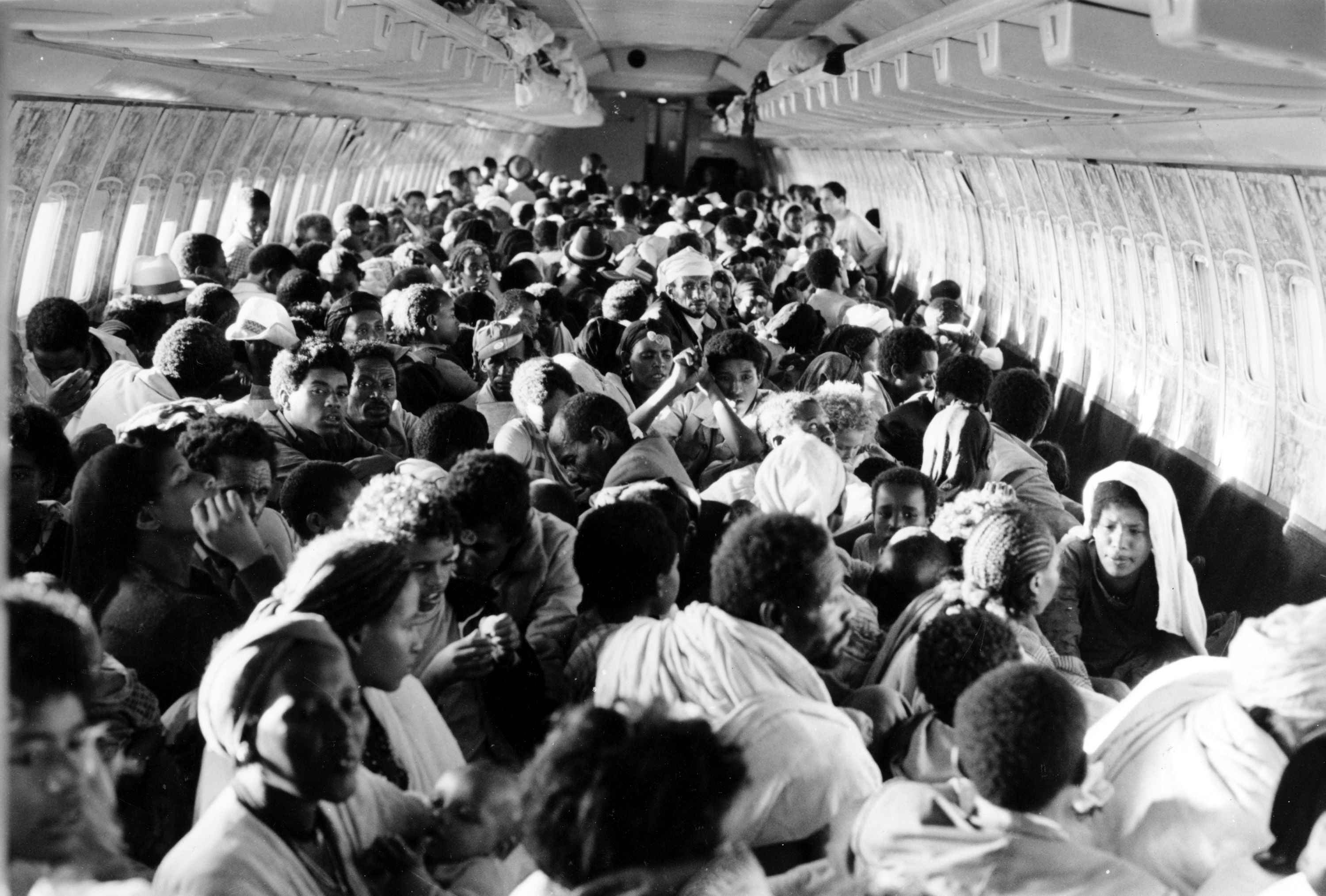 © AP Photo / JACQUELINE ARZT
In this May 25, 1991 file photo, Ethiopian Jews sit close to each other in one of the Israeli planes that took part in the air-lifting of Ethiopian Jews to Tel-Aviv, Israel.

Having provided clandestine support for the southern Sudanese insurgency from the 1980s until 2005, the Israeli Air Force carried out airstrikes in Sudan in 2009, accusing Khartoum of allowing Iran to smuggle arms to the Gaza Strip through its territory. Up to 119 people were killed in those strikes.

The last decade has seen an unspoken rapprochement in cool ties, and, according to Melman, prompted hopes from Bashir “that Netanyahu and the Mossad would be able to leverage the political clout of AIPAC and US Jewish organisations” in exchange for restored ties with Israel.

“According to foreign reports, in the twilight years of al-Bashir’s rule, Mossad chief Yossi Cohen met with his Sudanese counterpart General Salah Gosh for initial discussions on some form of trade and diplomatic relations between the two countries…But Sudan’s domestic unrest and a long-pent up wave of opposition to his rule stood in his way. By then, the Mossad knew he was a dead horse, and his days in power numbered,” Melman recalled.

Now, the journalist believes, “conditions could be ripe for a renaissance of relations” between Tel Aviv and Khartoum.

On Monday, in a first for Sudanese-Israeli relations, Sudanese leader Abdel Fattah al-Burhan met with Israeli Prime Minister Benjamin Netanyahu to discuss a possible normalisation of ties with Israel. The steps are set to include flights between the countries, and establishing a broad "relationship of goodwill with the entire world." Al-Burhan stressed that the normalisation of relations would require approval by his country's transitional ruling council. Sudan's military said Wednesday that the meeting was part of a broader effort to end Sudan's designation as a state terror sponsor. The US and its allies issued the designation in the 1990s after Sudan temporarily hosted al-Qaeda terror leader Osama bin Laden.*