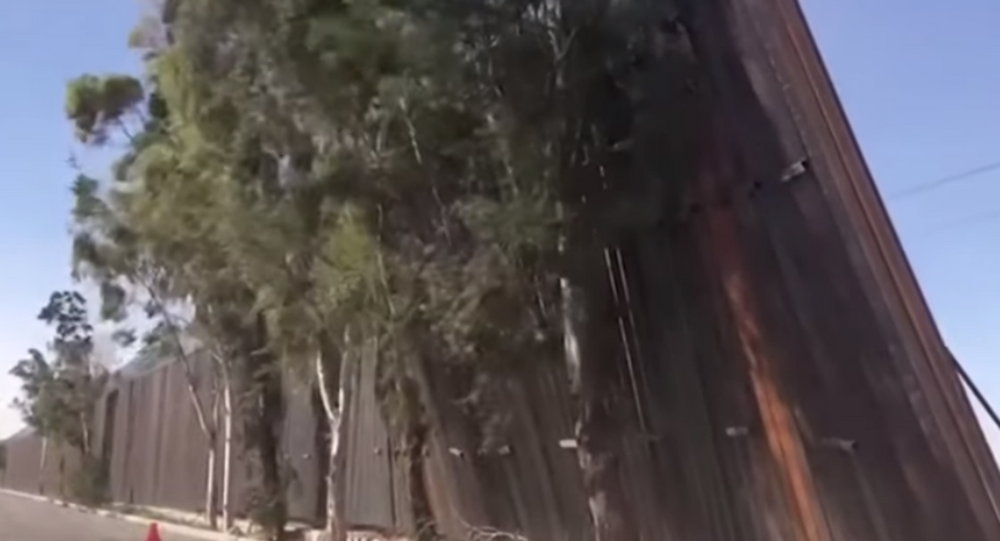 Newly installed panels of US President Donald Trump’s beloved wall along the US’ southern border with Mexico wound up pushed aside on Wednesday after a spell of strong Southern California winds blew into the region.

Local news station KYMA reported that the incident unfolded at around 12 p.m. local time along a 130-foot stretch of the border wall that runs in between California’s Calexico and Mexicali - the capital city of the Mexican state of Baja California, which is located just six miles across the border.

At the time of the collapse, the US National Weather Service indicated that the area was experiencing wind gusts between 20 and 30 mph when the steel bollard panels were shoved over in the direction of a typically congested Mexicali roadway.

Video footage of the incident shows the 30-foot panels leaning to the side at a sharp angle while being propped up by a row of Mexicali trees that line the roadway.

​Authorities told the San Diego Union-Tribune that the incident did not cause any additional property damages or injuries to individuals in the area. “Luckily, Mexican authorities responded quickly and were able to divert traffic from the nearby street,” said Border Patrol Agent Carlos Pitones, of the sector in El Centro, California.

The exact number of panels that toppled over has not been disclosed; however, Pitones did note that “several” were knocked down. Additionally, the official revealed that the affected panels had only recently been anchored in concrete, which had not yet hardened.

It’s presently unclear how long construction will be suspended as crews work on cleanup efforts.

While the incident was largely the fault of Mother Nature and poor timing by construction officials, the setback, to no one’s surprise, quickly became a laughing matter for many netizens - including Democratic presidential candidate Tom Seyer and immigrant rights advocate Juan Escalante.

Local media reports noted that the border wall stretch affected by the strong winds was constructed as part of an ongoing effort to replace an 11-mile portion of the existing barrier in the region.

Leaving His Mark: Trump Names First 100 Miles of Border Wall After Himself