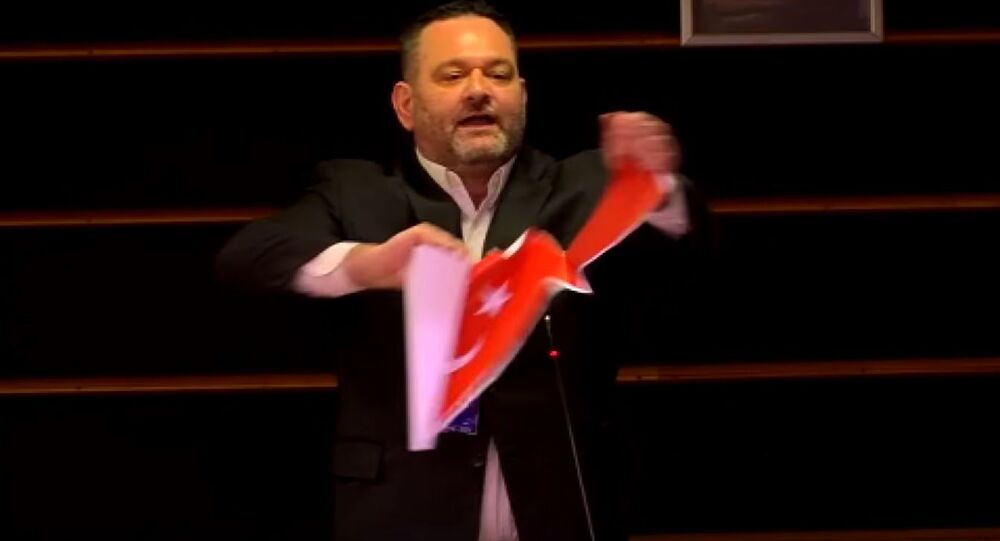 Athens has repeatedly accused Ankara of breaching the EU-Turkish deal on migration under which Ankara is supposed to limit the flow of migrants to the EU from the Middle East and North Africa.

Turkey’s Foreign Minister Mevlut Cavusoglu has responded to a Greek MP tearing up a Turkish flag by accusing the lawmaker of racism.

“These racists know best how we can wring the hands of those who dare to encroach on our glorious flag. May those spoiled children of Europe know their place. Europe must say ‘no’ to Islamophobia and racism”, Cavusoglu tweeted on Thursday.

Spot on decision on #Brexit 👏👏

Look what this racist Greek MP does in the EU.

The remark followed Greek lawmaker Ioannis Lagos ripping apart a Turkish national flag during a recent meeting of the European Parliament to discuss the migrant situation on Greek islands.

He spoke as media reports on Wednesday said that Athens plans to install a floating barrier to prevent migrants from reaching the Greek islands from Turkey following an influx of arrivals in the past year.

EU and Greek authorities should punish this impertenent man who dares to tear glorious Turkish flag in the shortest time! Their ancestors know the cost of tearing Turkish flag very well! 🇹🇷 pic.twitter.com/8glsovdC7z

Earlier this week, the Greek government said that Greece has started sending back around 30 rejected asylum seekers a day to Turkey, which “was accepting them”.

Athens has repeatedly accused Ankara of breaching the 2016 EU-Turkish migration deal which specifically stipulates that migrants entering Greek islands would be returned to Turkey unless they received asylum in Greece.

The flag-tearing incident may worsen the already tense ties between Turkey and Greece which remain at odds over the lack of an peace settlement on Cyprus, which has been divided since 1974, when Turkey invaded the northern part of the island nation in response to a Greek-backed coup.

Adding fuel to the fire is Athens’ refusal to extradite eight Turkish soldiers accused by Ankara of being involved in a 2016 coup attempt in Turkey. The soldiers were held in custody in Greece for months before being released in June.

Another bone of contention is Ankara’s reluctance to recognise Athens’ exclusive economic zones in the eastern Mediterranean.