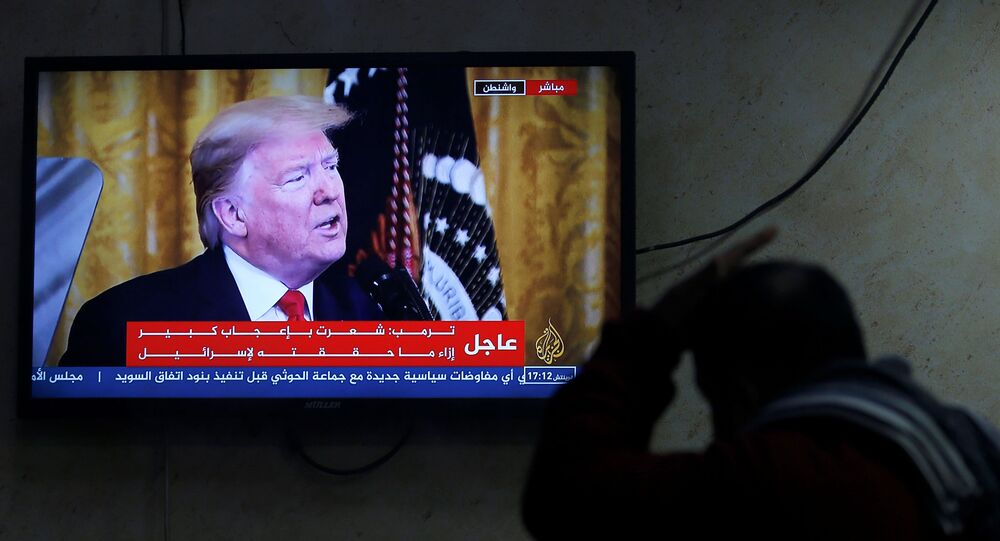 CAIRO (Sputnik) - Syria demands that the international community condemn the US peace plan on the Middle East and ensure that the legitimate land rights of Palestinians be protected, Syria's Foreign Ministry said on Wednesday.

"Syria demands that the international community condemns the United States' dismissive position in regard to international law and to confirm [previously adopted] resolutions to end the Israeli occupation of Palestinian territories and to ensure the legitimate rights of the Palestinians," the foreign ministry said.

The ministry also said that Damascus strongly condemned and rejected the "deal of the century," describing it as a call to surrender to the Israeli occupation of West Bank territories.

"The US plan demonstrates again that the US policy in the region benefits only Israel and its expansionistic plans at the expense of the Arabs' rights and interests," it added.

In addition, Damascus called on the international community to condemn the US' stance toward international law and confirm resolutions on ending the occupation of Palestinian territories by Israel and ensuring rights of the Palestinian people.

On Tuesday, US President Donald Trump presented his so-called deal of the century that proposes a two-state solution for the Israeli-Palestine conflict. Earlier in the day, the Arab League said that the plan violated Palestinians' legitimate land rights.

The so-called deal of the century was revealed by Trump during a joint press conference with Israeli Prime Minister Benjamin Netanyahu. According to the peace plan, the Palestinians would be able to have a state of their own with the capital in East Jerusalem, while Washington would, in turn, recognise Israeli settlements in the West Bank. The United States and Israel will form a joint committee to monitor the deal implementation.

Palestinian leader Mahmoud Abbas has rejected Trump's initiative, saying the Palestinians would only negotiate with the Middle East Quartet rather than with the United States or under the terms of the US peace plan.