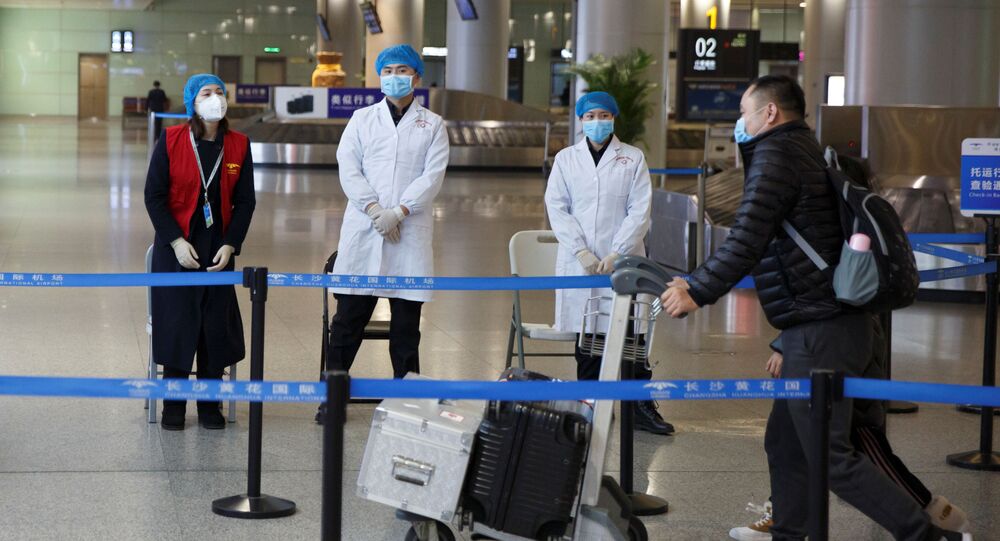 New Delhi (Sputnik): The deadly Novel Coronavirus, which drew public attention less than a month ago in China, is spreading in countries across the globe, with a total number of confirmed cases globally reaching 2,014 including 1,985 in China.

India has begun the process of evacuating its nationals from the affected areas of China where an outbreak of the Novel Coronavirus has led to a state of emergency, the External Affairs Ministry confirmed on Tuesday.

"Our Embassy in Beijing is working out the logistics and is in touch with the Chinese government authorities and our nationals on this matter," the ministry said in a statement.

The decision has come given the spike in the death toll from the Coronavirus to 106 as of 28 January.

"We have begun the process of preparing for the evacuation of Indian nationals affected by the situation arising out of the Corona-2019 virus outbreak in Hubei Province, China," the MEA statement added.

However, the Indian government has not yet issued any clarification on whether all citizens will be brought back or just those raising concerns over the situation.

The State-run carrier, Air India, has kept one of its 423-seater jumbo planes on standby in Mumbai to undertake the evacuation process.

Meanwhile, similar steps are also being taken by the US, Sri Lanka, Germany, France, Japan, and Australia to evacuate their citizens from China, which is currently under travel restrictions.

The Sri Lankan Embassy in Beijing confirmed that more than 200 students had been repatriated today.

France will send its first plane to China's Wuhan to repatriate its nationals on Wednesday; Japan will send a charter plane on Tuesday night. Germany is also set to evacuate some 90 citizens trapped in China's Wuhan region, and Morocco will airlift 100 of its citizens, mostly students.

Taking cognizance of the outbreak, India's Health Ministry has confirmed all hospitals in the country are ready to handle the situation if needed, and no cases of coronavirus have yet been confirmed.

A 24X7 helpline number has also been set up to attend to the queries of citizens regarding the viral outbreak.

"No positive cases of novel coronavirus have been detected in India, although we have suspected cases in isolation in Kolkata, Jaipur, Chandigarh and Patna. Of the 17 cases, 14 samples were tested, and they have come back negative for the virus so far," Indian daily, The Hindu, quoted a health ministry official as saying.

However, large numbers of cases with virus-like symptoms are being reported in various cities in India, despite not having been verified as Novel Coronavirus so far.

The previously unknown strain of viral pneumonia was first reported in China's city of Wuhan in early January and has since been confirmed by China and the World Health Organisation to be a new strain of the Coronavirus, currently labelled 2019-nCoV or Novel Coronavirus. The symptoms of the virus are said to include coughing, fever, sneezing and difficulties in breathing.