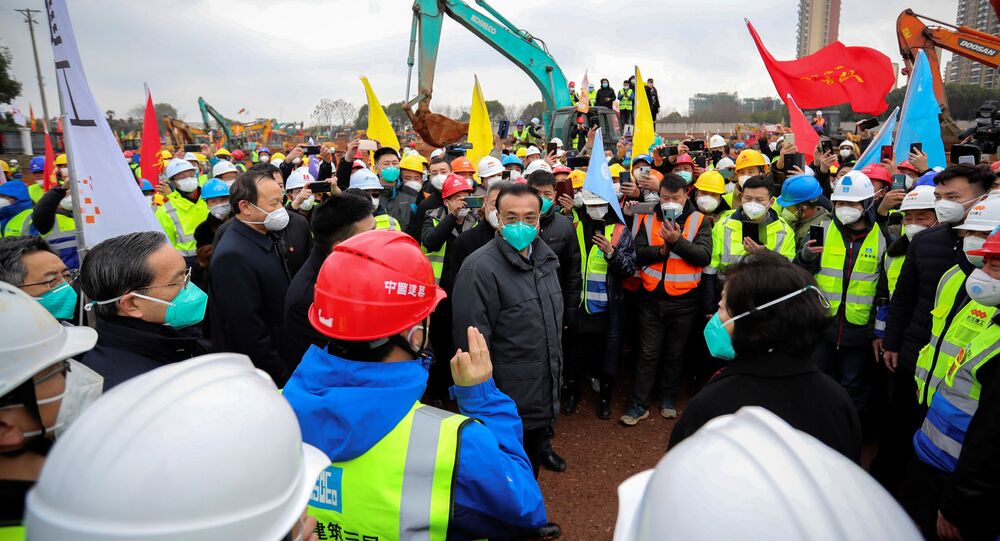 New Delhi (Sputnik): The Chinese premier has asked workers to speed up the construction of hospitals for treating patients with the novel coronavirus. China aims to operationalise a makeshift hospital with around 2,500 beds by 5 February. Meanwhile, India, the US, and Sri Lanka have prepared evacuation plans for their citizens locked down in China.

Moving to accomplish the construction work on schedule, China announced on Monday that it had completed the first hospital building for treating coronavirus patients in just 16 hours.

The Chinese Foreign Ministry published a video of the makeshift hospital, saying that the country is “racing against time”.

“We are racing against time. The 1st building of Wuhan's Coronavirus hospital, Huoshenshan hospital, was completed in 16 hours”, Lijian Zhao, deputy director general of China’s Ministry of Foreign Affairs, said while tweeting the video of the constructed building.

The Foreign Ministry official urged people to pray for Wuhan and China amid the first death caused by the deadly coronavirus in Beijing on Monday evening.

​Meanwhile, after holding a high level review meeting in New Delhi, the Indian government announced that it is taking steps to "prepare for possible evacuation" of its 250 citizens from Wuhan.

“It was decided that steps may be taken to prepare for possible evacuation of Indian nationals in Wuhan. Accordingly, Ministry of External Affairs will make a request to the Chinese authorities”, a government statement issued on Monday night reads.

The government has also begun screening visitors across the Nepal border and at international ports with traffic from China. India’s Ministry of Civil Aviation has also announced the distribution of health cards to all flights with direct or indirect connectivity to China. So far, India has screened nearly 30,000 passengers arriving on flights from China and Hong Kong for symptoms of the virus.

Sri Lanka, India’s southern neighbour, reported its first case of novel coronavirus on Monday night. The Health Ministry of Sri Lanka stated that a 43-year-old Chinese tourist tested positive for the coronavirus. Sri Lanka’s President's Office has announced the beginning of an evacuation process on Monday. Discussions are currently underway among Chinese and Lankan authorities to bring back students from Wuhan, which is currently locked down.

Germany, France, the US, Japan, and Australia have also firmed up plans to evacuate their citizens from China. The US has planned to carry out the first evacuation from Wuhan on Tuesday, while French Health Ministry said that citizens who want to leave Wuhan will be taken on a direct flight to France in the middle of the week. German Foreign Minister Heiko Maas said: "We are checking and preparing for all options; that means we are also considering a possible evacuation of all those willing to leave".