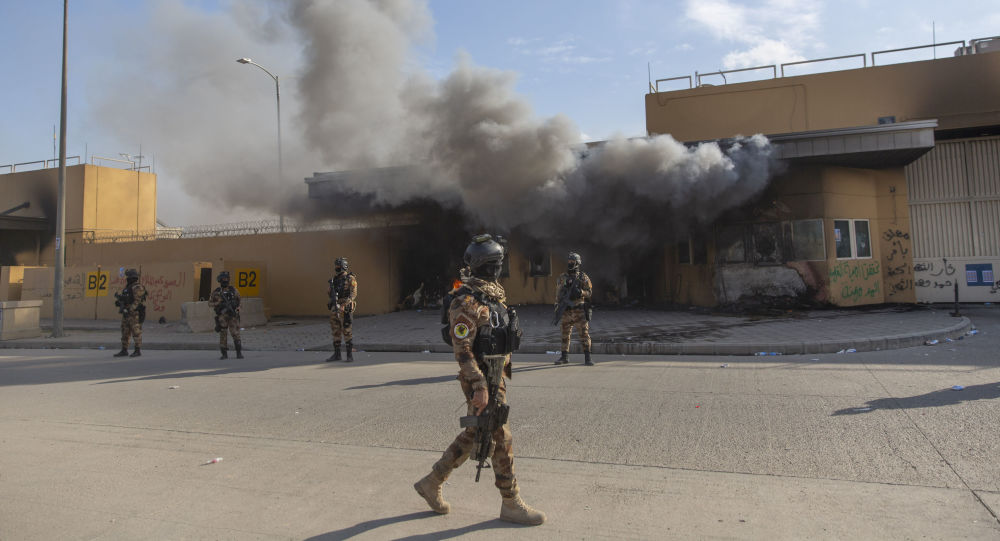 Three rockets were fired at the US Embassy in Baghdad's green zone this Sunday, with one of them hitting its restaurant, according to media reports. The attack reportedly resulted in several casualties.

Iranian-backed groups threaten Iraq's security, the US State Department said on Sunday, following the recent strikes at the US Embassy in Baghdad, the capital of Iraq.

"The security situation remains tense and Iranian-backed armed groups remain a threat. So we remain vigilant", the statement said.

A State Department spokesperson said that there have been over 14 attacks "by Iran and Iranian-supported militias" on US personnel in Iraq since September 2019.

The US also called on the Iraqi government to "fulfill its obligations" to protect the American facilities in the country.

Earlier, Al Arabiya reported citing AFP that three rockets hit the US embassy in Baghdad's green zone, the centre of Iraq, where other Iraqi government buildings are located.

The Iraqi Al Sumaria TV reported that several people were injured in the missile attack. All personnel and people on the territory of the embassy were being evacuated from the embassy by helicopter.

The situation in the region escalated after Iran's top military commander Qasem Soleimani was killed in the US targeted attack on the Internation Airport in Baghdad on 3 January. Iran retaliated with attacks on US military facilities in Iraq, resulting in casualties among the American personnel.

Following Soleimani's assassination, the Iraqi parliament voted to expel all coalition forces from its territory, which have remained in the country despite the announced victory over Daesh* terrorists.