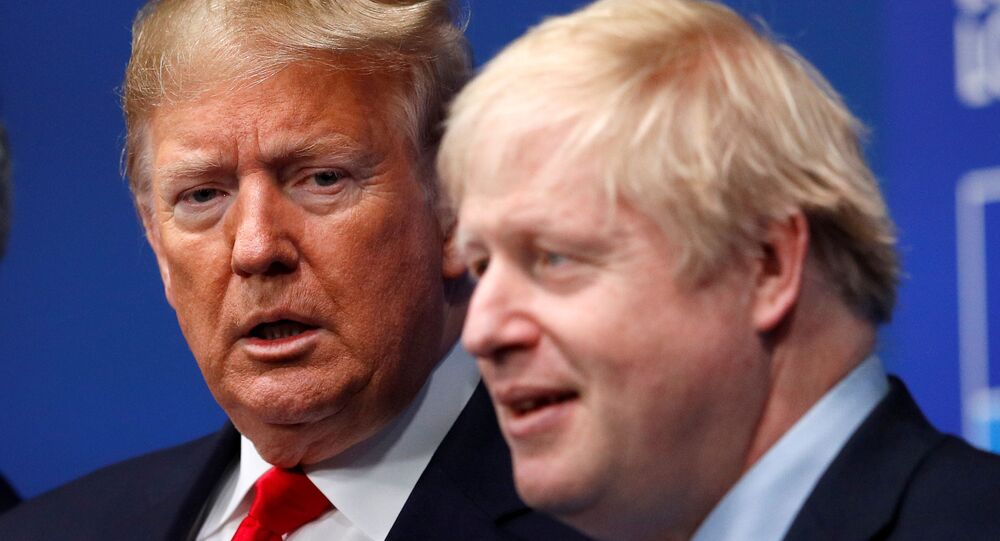 The UK is soon expected to make a final decision on whether to allow Chinese tech giant Huawei to supply the country with 5G equipment. Washington, however, has repeatedly warned London that this move could threaten British national security and potentially compromise intelligence sharing between the transatlantic allies.

During the conversation, Trump reportedly told the British prime minister that allowing Huawei to have access to the UK’s 5G network would be a serious threat to the country’s national security, potentially risking cooperation between the allies amid Britain’s upcoming divorce with the EU and Johnson’s willingness to conclude a separate trade agreement with Washington.

The phone call was confirmed by the White House, who said on Friday that during the conversation the “two leaders discussed important regional and bilateral issues, including working together to ensure the security of our telecommunications networks”, although the details of the call were not revealed.

Is the UK Prepared to Defy Washington?

The news follows reports that London was prepared to snub Washington’s calls to ban Huawei from participating in Britain’s 5G build-up and equipment supply. A final decision on the matter is expected to be made by Britain’s National Security Council (NSC) on Tuesday.

London believes that allowing Huawei, and not its tech competitors, such as Nokia, to participate in its national 5G rollout would be financially beneficial to the country, but Washington has repeatedly warned its ally that such a decision would risk compromising UK national security and intelligence-sharing between the Five Eyes security alliance, which includes the United States, Australia, Canada, New Zealand, and the United Kingdom.

The Sunday Times reported Trump also suggested that Britain and the US could come up with a joint alternative to the Chinese tech titan, but the option was allegedly disregarded by the UK as being too long-term. Some of Johnson’s cabinet ministers have also reportedly warned about the potential dangers to UK national security resulting from Huawei having access to the sensitive telecom network, even to only so-called “non-core” parts, thus provoking a furious internal row.

Last week, several US officials travelled to London to try and convince London to backtrack on its plans to include Huawei in building Britain’s 5G infrastructure, with US Treasury Secretary Steve Mnuchin also potentially weighing in on the debate during his trip and Saturday meeting with his British counterpart Sajid Javid.

© AFP 2020 / SAUL LOEB
US Secretary of State Mike Pompeo and Secretary of the Treasury Steven Mnuchin listen as President Donald Trump speaks at a press conference in New York, September 25, 2019, on the sidelines of the United Nations General Assembly.

Now, US Secretary of State Mike Pompeo is also set to arrive in the UK this week to discuss the future of Huawei 5G equipment in the country. This pledge has been echoed by three US senators, including former 2016 presidential candidate Marco Rubio, who recently wrote a letter to Britain’s NSC, urging the body to avoid granting the Chinese company access to the sensitive network.

© REUTERS / DENIS BALIBOUSE
US 'Over-Concerned' With Huawei's Success, Should Work Jointly To Benefit Humanity - Huawei CEO
Washington’s calls come amid claims that Huawei has been engaging in surveillance activities on behalf of the Chinese government, allegations that have been strongly denied by the company and Beijing. Trump administration banned the telecom provider and 68 of its subsidiaries from working with American companies starting in May 2019, while pressuring its allies to avoid conducting business activities with the firm.
...
Reddit
Google+
Blogger
Pinterest
StumbleUpon
Telegram
WhatsApp
488
Tags:
Brexit, 5G, Sajid Javid, China, Steven Mnuchin, Great Britain, United States, Huawei, Boris Johnson, Donald Trump
Community standardsDiscussion