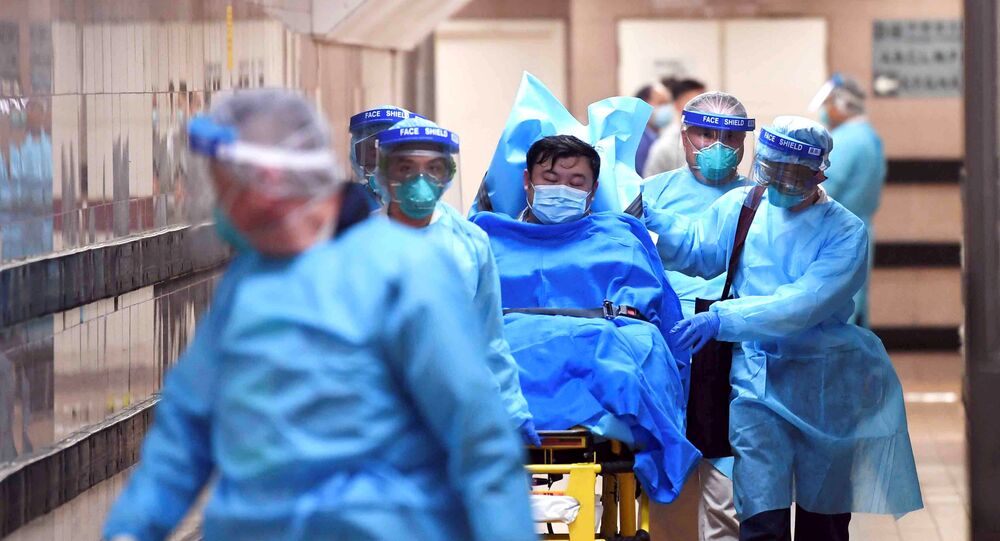 The latest coronavirus outbreak in China has already claimed the lives of 26 people and led to strict quarantine measures. But its effects have not been limited to strictly medical ones, as the "fear epidemic" has already started to affect stock markets and economies globally.

The emergence of a new strain of coronavirus, dubbed 2019-nCoV, in China, and its rapid spread to not only neighbouring countries, but also to the US and possibly several European states, has once again sparked concerns of a wider and uncontrollable epidemic. Not only eastern, but also western stock markets showed poor results on the backdrop of every piece of news indicating new infection cases around the globe. Governments worldwide have taken measures involving medical screening for tourists coming from China, who could be carrying the contagious virus strain.

But despite all the worries, most of the epidemics in the last decade were ended rather swiftly after a rapid government response. Sputnik recalled five epidemics that sparked public concern over the past decade.

The last decade witnessed the end of an outbreak of a highly contagious strain of H1N1 influenza virus. The strain that caused the outbreak in April 2009 in Mexico and later spreading to the rest of North America, Europe and Asia, purportedly appeared to be the result of a mixture of old strains with a Eurasian pig flu virus – hence the name "swine flu" used in most media.

While the disease started with fever, cough, headache, muscle or joint pains typical for seasonal flus, it sometimes gave severe complications leading to respiratory failures and death in the absence of proper medical support. Children younger than five and seniors were among those who were most endangered by the new strain.

With the introduction of a vaccine late in 2009, the epidemic started to decline, with the World Health Organisation declaring it over in August 2010. It is estimated that between 10–200 million people were infected and according to various estimates between 18,500 and 151,000 died from the disease. At the same time, seasonal flu viruses infect between 340 million and 1 billion of the world's population each year and also result in hundreds of thousands fatalities. While the mortality rate of the new H1N1 strain was three times higher than that of regular flu, its outbreak was eventually stopped like any other seasonal flu.

While most E.coli bacteria are harmless to humans, certain strains can cause illnesses with major complications. That was the case with the O104:H4 strain outbreak that produced toxins as a result of its activity, leading to such symptoms as bloody diarrhea, kidney failure, fever and vomiting.

The epidemic started from a farm in Lower Saxony, Germany in May 2011, but later expanded its presence to Canada, Denmark, Poland, the Netherlands, Switzerland, Sweden, the UK and the US via food. However, it was promptly contained, with most of those affected being German citizens. The outbreak infected a total of 3,842 people with 53 fatalities, and was deemed over by July 2011.

One of the deadliest virus outbreaks in terms of mortality rates took place back in 2012, when a betacoronavirus causing Middle East respiratory syndrome (MERS), also known as "camel flu", was found in Saudi Arabia and then spread to other Middle Eastern states, mostly affecting Saudi Arabia itself, and then migrated to Europe, the US and Asia.

While it affected only 1,329 people between September 2012 and June 2015, it had a stunning fatality rate of 39%, killing 525 people in total. The illness caused fever, cough, diarrhea, and shortness of breath, but sometimes resulted in acute respiratory distress syndrome, kidney failure and other complications that led to the deaths of patients. There is still no vaccine against "camel flu", but eventually the amount of new infection cases started to decline until it reached zero in 2015.

Another flu strain, Influenza virus subtype H7N9, also dubbed "bird flu" or "avian influenza" due to its being transmitted by birds, struck China in 2013, infecting over 100 people in a matter of months, spreading faster than many similar viruses, killing around 20 of them and leaving around 60 in critical condition. The virus' rampant spread drew the attention of all global media outlets, but eventually it was stopped, infecting only 1,622 people and claiming the lives of 619 of them.

Nowadays, the "bird flu" is mostly associated with another Influenza virus subtype, H5N1, which has been known since 1997 and has periodically emerged in various countries, claiming the lives of 407 people in total between 2003 and 2014, but it has never resulted in any major epidemics and thus gets little attention from the media.

One of the latest epidemics that shook the world originated in West Africa, where thousands of people became infected with a strain of Ebola virus, which killed around 59% of those infected or 28,616 people, and left many survivors with post-Ebola syndrome, which includes such symptoms as joint and muscle pain, eye problems and neurological problems that can last for years.

The attempts to contain the outbreak were severely affected by the poor socioeconomic situation in the region, preventing effective quarantining and even the protection of doctors who cured affected patients. Thus, the disease expanded beyond Africa, spreading to the US, Italy, the UK and Spain, although all of them managed to prevent a local epidemic, curing all who were affected.

Still, at certain points the disease's rampant spread caused public concerns and attracted major attention from the media, which mulled the possible disastrous consequence of the Ebola outbreak for the world. The then-US President Barack Obama went to great lengths to stop American citizens from panicking and made the fight against Ebola one of his administration's priorities.

The measures taken by the international community produced results, with the outbreak being declared over in 2016 and an experimental vaccine is being developed and awaiting approval for release, effectively ending all apocalyptic theories about the dangers that the Ebola virus posed for humanity.