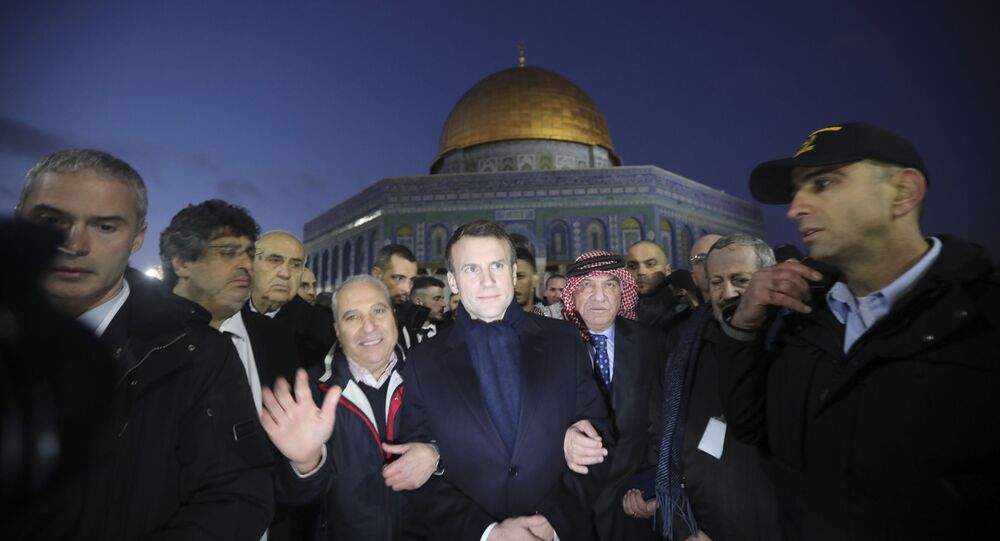 France’s head of state is just one of dozens of foreign leaders visiting Israel for a two-day event commemorating the Holocaust and the 75th anniversary of the liberation of the Auschwitz death camp.

French President Emmanuel Macron has been caught on camera flying off the handle at his Israeli security detail after entering a French-administered church in the Old City of Jerusalem.

“We know perfectly everybody knows the rules. I don’t like what you did in front of me. Go outside,” Macron said, pointing and gesturing with his hand to one of his Israeli police officers to leave the premises.

“I’m sorry, you know the rules. Nobody has to provoke nobody,” Macron continued.

Telling an officer beside him that he appreciated their help during the tour of the city, Macron urged police to respect the rules “as they are for centuries,” adding that “they will not change with me, I can tell you.”

It’s not immediately clear what sparked the incident, which took place at the entrance of the Church of Saint Anne. The ancient medieval-era Catholic church, situated in the Muslim Quarter of the Old City of Jerusalem, belongs to the French government, and is administered by Catholic missionaries. The Church was presented to French King Napoleon III by Sultan Abdulmejid I of the Ottoman Empire in 1856.

French commentators immediately recalled a similar incident which took place in 1996, when then-President Jacques Chirac had an eerily similar altercation with Israeli security agents as they pressed him to ‘move on’ from the church. Chirac called the incident a “provocation,” threatened to cancel his trip, and refused to enter the shrine until Israeli security forces left the church. That incident too was caught on tape.

Macron, who met with Israeli Prime Minister Benjamin Netanyahu on Wednesday, is also expected to speak at the Fifth World Holocaust Forum, organized by the World Holocaust Forum Foundation to commemorate the 75th anniversary of the liberation of the Auschwitz death camp. The French president is one of just a handful of world leaders invited to speak at the event, joining Russian President Vladimir Putin, Prince Charles, German President Frank-Walter Steinmeier, and Israeli President Reven Rivlin. The leaders of 47 countries are slated to take part in the two-day event, with 10,000 police officers deployed to provide security.