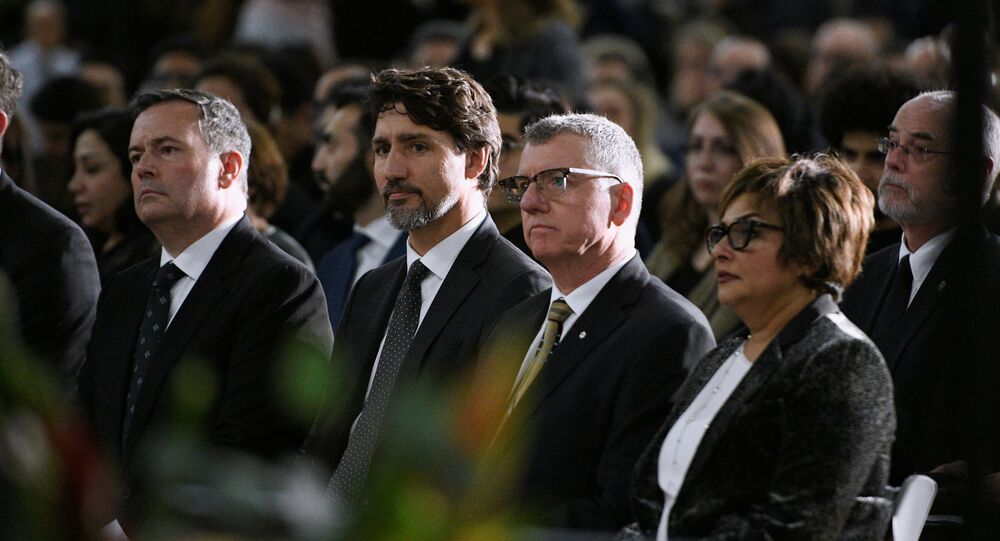 Canada to Provide Families of Ukraine Plane Crash Victims $25,000 for Each Who Died – Trudeau

The Iranian military has admitted to unintentionally shooting down a Ukrainian Boeing on 8 January near Tehran's airport, killing all 176 people on board. According to the Ukrainian Foreign Ministry, 82 Iranians, 63 Canadians, 11 Ukrainians, 10 Swedes, four Afghans, three Germans, and three Britons were among the victims.

The Canadian government will provide the families of the Ukrainian plane crash victims 25,000 dollars for each of those who died, Prime Minister Justin Trudeau said, adding that Ottawa expects that Tehran will repay the compensation. Trudeau has also stated that people in Iran are currently "aligned" with the push for a full probe into the crash.

The government is taking this unprecedented step, Trudeau said, because the strict international sanctions placed on Iran make it difficult for the families to receive aid during this difficult time.

"The Iranians bear full responsibility for having shot down a civilian airline with 57 Canadians aboard, 176 passengers", Trudeau said.

The prime minister said that any compensation that does come from Iran would go directly to the families and not to reimburse the Canadian government. Trudeau did not provide more details when asked to specify the amount of compensation that Canada expects from Iran or whether the compensation would be awarded on a voluntary basis, or would proceed through litigation.

The statement comes after Canadian Foreign Minister Francois-Philippe Champagne said that Canada, Ukraine, Sweden, Afghanistan, and the United Kingdom, whose citizens died in the crash, hoped for Iran’s full cooperation and a transparent international investigation.

© REUTERS / Social Media
Canada, Other Involved States Demand That Iran Accept Responsibility for Ukrainian Boeing Downing
The Ukraine International Airlines-operated passenger plane crashed on 8 January near Tehran’s Imam Khomeini International Airport, killing all 176 people on board. The International Coordination and Response Group was created at the behest of the Canadian government and comprises the grieving nations in search of answers following the downing of the UIA jet.

On 11 January, the Iranian military admitted to unintentionally shooting down the aircraft while being on alert after attacking Iraqi military bases that host US servicemen. Ukrainian President Volodymyr Zelensky said that he expected Tehran to punish those behind the fatal mistake and pay compensation to the families of the victims.