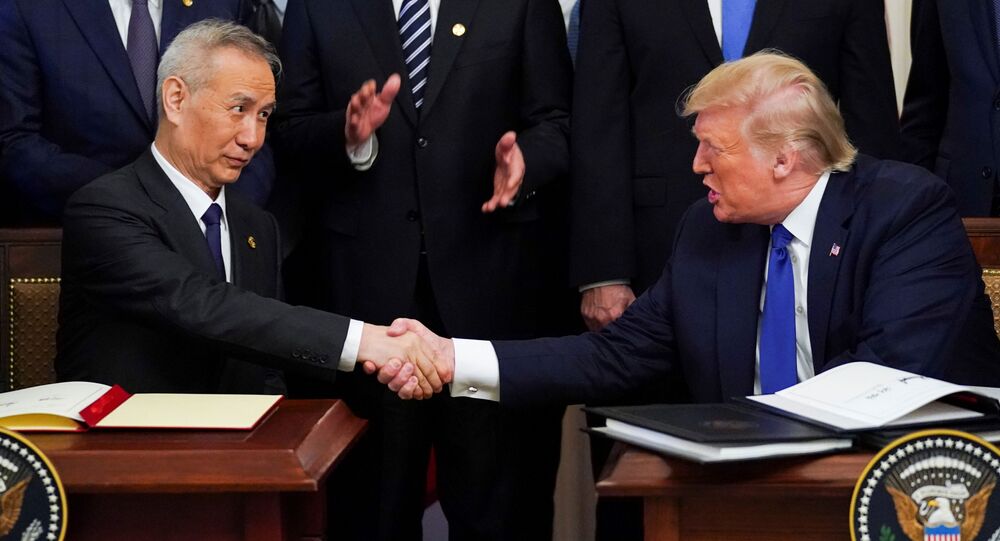 US President Donald Trump and Chinese Vice-Premier Liu He on Wednesday signed Phase One of a trade agreement between the two nations, after a lengthy trade war which sowed uncertainty on international markets and slowed the outlook of world economic growth.

The much-anticipated agreement, which the White House deems "fully enforceable", envisages the settlement of a range of disputed issues, from crude oil to patent term extension.

Under the text of the Phase One deal - which was released later in the day by the Office of the US Trade Representative - both sides agree that they can formally complain to each other if either feels the other side is not holding up its end of the bargain.

China Accepts Deal to Buy $200Bln in US Goods

First and foremost, the document obliges Beijing to purchase at least $200 billion worth of US goods over the next two years.

"During the two-year period from January 1, 2020, through December 31, 2021, China shall ensure that purchases and imports into China from the United States of the manufactured goods, agricultural goods, energy products, and services identified in Annex 6.1 exceed the corresponding 2017 baseline amount by no less than $200 billion", the text of the agreement reads.

The United States and China agreed to protect patents, particularly in pharmaceuticals, and ban counterfeit products and the misappropriation of trade secrets.

"China shall permit pharmaceutical patent applicants to rely on supplemental data to satisfy relevant requirements for patentability, including sufficiency of disclosure and inventive step, during patent examination proceedings, patent review proceedings, and judicial proceedings", the text of the deal said. "The United States affirms that existing US measures afford treatment equivalent to that provided for in this Article".

Beijing and Washington also resolved to strengthen cooperation and coordination in combating piracy, including counterfeiting on e-commerce platforms, in the agreement.

On the protection of trade secrets, the United States said China will treat as "urgent" the use, or attempted use, of claimed trade secret information and provide its judicial authorities the authority to order a preliminary injunction based on case facts and circumstances. Washington pledged to do the same for China.

China to Boost US Energy Imports by $52 Bln

China also agreed to increase purchases of US energy products by $52 billion in the next two years.

The US energy products will be part of the total $200 billion worth of US goods that China will import through 2021, according to the agreement.

The agreement listed the US energy products that China will be buying as: crude oil, liquefied natural gas, refined petroleum and coal.

China is the world’s largest buyer of oil and the United States is the largest producer of the commodity.

Oil prices, which hit five-week lows earlier on Wednesday, pared their losses after the energy deal was announced by the US and Chinese governments.

Under the Phase One deal China agrees to not engage in currency manipulation for the purpose of achieving trade advantages over the United States.

"The Parties shall refrain from competitive devaluations and not target exchange rates for competitive purposes, including through large-scale, persistent, one-sided intervention in exchange markets," the agreement states.

The United States and China will communicate regularly and consult on foreign exchange markets, activities and policies as well as consult with each other regarding the International Monetary Fund's assessment of the exchange rate of each country, the agreement states.

The agreement states that the United States and China should achieve and maintain a market-determined exchange rate regime.

The agreement comes after two years of wrangling and numerous halts in discussions, during which both sides piled hundreds of billions of dollars of tit-for-tat tariffs on each other.

Despite the signing of the accord, the Trump administration will maintain tariffs on $360 billion of Chinese goods in an attempt to hold Beijing accountable to the deal, US officials said. The Chinese government has also said it will decide later on the tariffs it has imposed on US imports, which last stood at $185 billion in value.

US Treasury Secretary Steve Mnuchin commented earlier on Wednesday on the agreement and said that certain technology and cybersecurity issues would be resolved in the next chapter of the deal to end the trade dispute.

Although the timing and details of Phase Two remain vague, Mnuchin ruled out Huawei being included, claiming that the Chinese tech giant is part of "the national security dialogue".

Trump claimed during a news conference on Wednesday that he does not foresee a Phase Three trade agreement with China, expecting to conclude the trade negotiations with Phase Two.

Trump said earlier that inking of the second phase of the deal may have to wait until after the 2020 presidential election to allow time to negotiate a better agreement.

Phase One and Phase Two could reportedly ease trade tensions between the two major economic powers but it would unlikely settle the dispute, The Washington Post reported.

According to the media outlet, the Trump administration is developing new export control regulations aimed at limiting flows of sophisticated technology to China, while US officials embarked on closely scrutinizing potential Chinese investments in the United States. Media reports of alleged new economic and technology levies against Beijing sparked speculation among analysts that Phase Three should not be excluded.