As Meghan and Harry Rock the Boat, Which is the World’s Most Secure Royal Family?

The British Royal Family has been rocked by the decision of the Duke and Duchess of Sussex to “step back” and seek financial independence. From Spain to Thailand, royal families around the world are having a tough time.

Earlier this week Queen Elizabeth II reluctantly gave her blessing to a “period of transition” when Prince Harry and his American wife Meghan will split their time between the UK and Canada.

The Queen said the deal, sealed at a special family summit at the Royal Family’s Sandringham estate which Meghan did not attend, involved “complex matters for my family to resolve” and she said she had asked for “final decisions to be reached in the coming days”.

In the 20th century a number of countries got rid of their royal families - Germany, Austria and Turkey in 1918, Italy in 1946, Ethiopia and Greece in 1974 - and Nepal followed suit in 2008, seven years after Crown Prince Dipendra massacred 10 relatives at a royal banquet.

So how many countries still have monarchies, and how are they getting on with life in the 21st century?

The imperial family should have been abolished in 1945 after Japan’s defeat in the Second World War but the United States decided to keep Emperor Hirohito on the Chrysanthemum Throne in the hope of staving off a communist takeover in Tokyo.

​Although no longer considered a god-like figure, Hirohito remained as Emperor until his death in 1989, when his son Akihito succeeded him, ushering in an era known as Heisei.

Akihito, now 86, has stepped aside for his 59-year-old son Naruhito, but the problem will come with the next generation.

© AFP 2019 / KAZUHIRO NOGI
Japanese Emperor Akihito (C) and Empress Michiko (7th R) greet well-wishers with other members of the royal family from the balcony of the Imperial Palace in Tokyo on January 2, 2016

Naruhito has only one child, 18-year-old Princess Toshi, and the imperial household does not accept female succession.

So Naruhito’s younger brother, Fumihito, has been named as Crown Prince Akishino.

There is no political pressure in Japan for the imperial household to change and there is no likelihood of it ever becoming a republic.

The 20th century was a torrid time for the Spanish royal family.

In 1931 King Alfonso XIII was forced to abdicate when the left-wing government declared a republic.

Five years later the Spanish Civil War broke out and after defeating the republicans General Francisco Franco was declared Caudillo (Leader) and ran a fascist dictatorship until his death in 1975.

On his deathbed Franco agreed to allow the Spanish royal family to return from exile and King Juan Carlos became a constitutional monarch.

Our delegation was honored to have an audience with H.M. King Felipe VI at Zarzuela Palace this morning where we discussed the strong ties between our two great nations and our shared commitment to addressing the climate crisis as Spain hosts #COP25. #TimeForAction pic.twitter.com/M9IYeSq9VL

​Juan Carlos played a crucial role as the glue which kept Spain from fragmenting again during the late 1970s and in 1981 his intervention was crucial, when he denounced a coup attempt which promptly collapsed.

Juan Carlos abdicated in 2014 and was succeeded by his son, who became King Felipe VI, but the Spanish royal family has been beset by allegations of corruption and graft.

The uprising in Catalonia has also highlighted differences within Spain and in November more than 2,000 Catalan nationalists demonstrated in Barcelona during a royal visit and chanted: “Catalonia has no king!”

Traditionally no royal family is more revered than the Thai monarchy and there are strict lèse-majesté rules in Thailand which forbid any criticism or gossiping.

But the death of the 88-year-old King Bhumibol in 2016 deprived the monarchy of its most revered figure and his son, the long-time Crown Prince Vajiralongkorn, is a controversial character - a womanising gambler and bully who is disliked by many, including Thai royalists. 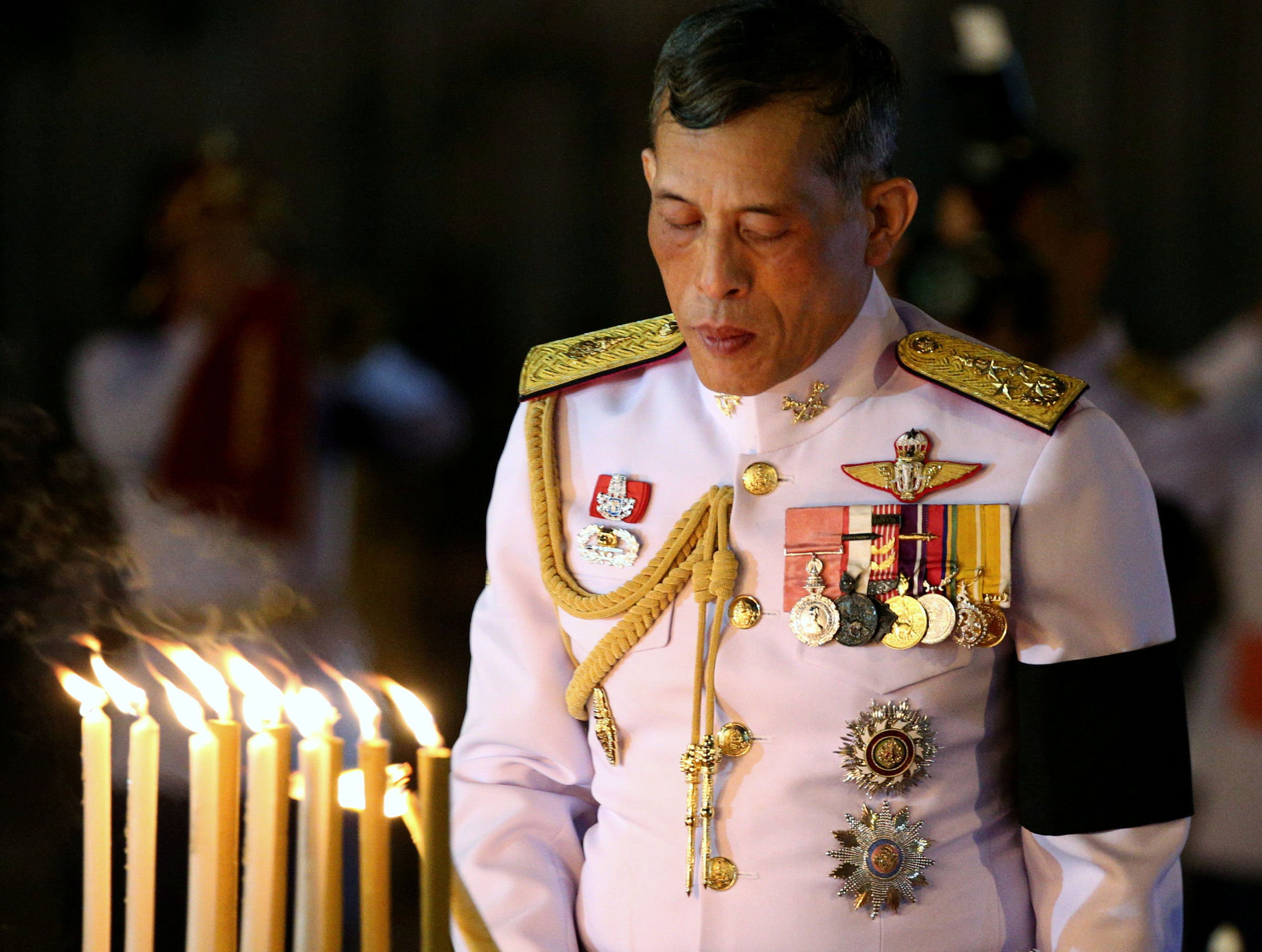 © REUTERS / Athit Perawongmetha
Thailand's Crown Prince Maha Vajiralongkorn attends an event commemorating the death of King Chulalongkorn, known as King Rama V, as he joins people during the mourning of his father, the late King Bhumibol Adulyadej, at the Royal Plaza in Bangkok, Thailand. (File)

Now officially known as King Rama X, has had four wives - three of whom he has divorced - and the most recent, Suthida, 41, a former flight attendant, was forced to watch in August last year as the monarch made his mistress, 34-year-old Sineenat Wongvajirapakdi a royal consort.

But two months later she was stripped of the title for "misbehaviour and disloyalty against the monarch."

An official announcement in the royal court's gazette said she had been "ambitious" and “disrespectful” and had tried to "elevate herself to the same state as the queen."

The spat made the disagreement between the Duchess of Sussex and her mother-in-law look like a walk in the park.

The Swedish royal family has attempted to move with the times and has tried to head off controversy and criticism by downsizing.

© REUTERS / TT News Agency/Claudio Bresciani
Princess Sofia and Prince Carl Philip are seen in Stockholm, Sweden, March 10, 2016. The Swedish Royal court announced on April 19, 2016 that the Princess has given birth to a healthy child.

In October King Gustaf XVI removed five of his grandchildren from the royal house, meaning they are no longer called “royal highness” or expected to perform official duties.

DickHarrison, a Swedish historian, told the BBC there was controversy about the funding of the royal house in Sweden but no decision had been taken on cutting off the princes and princesses.

“The king is preventing a discussion that otherwise would have taken place," he said.

The House of Glücksburg is led by Queen Margrethe II, 79, whose grandfather King Christian X remained the monarch during the German occupation in the Second World War and was praised for leading the “mental resistance” to the Nazis.

Margrethe is a constitutional monarch who does not get involved in politics but in 2016 she stepped over the line fractionally while being interviewed by journalist Thomas Larsen for his book, The Deepest Roots.

Commenting on the immigration debate, she said: “It’s not a law of nature that one becomes Danish by living in Denmark. It doesn’t necessarily happen.”

“Those who came from South-east Asia have generally prospered. Others have had more difficulty adapting. They have had a hard time finding their rhythm in Denmark, she said in comments which were perceived as being critical of Muslim migrants.

The Belgian monarchy tries to keep a very low profile in a country which is divided between the Dutch-speaking Flemish and the French-speaking Walloons.

King Philippe, who of course speaks both languages, became head of state in 2013 when his father, King Albert II abdicated due to old age.

Educated at Oxford and Stanford, he has a degree in political science but knows how to keep his nose out of Belgian politics.

Perhaps the best known of Belgian kings was Leopold II, who oversaw hideous atrocities in the Congo in the 19th century when he ran it as his own personal fiefdom.

In 2018 one of Leopold’s former palaces near Brussels was reopened as the Africa Museum and its Director General, Guido Gryssels, said: “King Leopold was pretty brutal even for those times.”

The Dutch royal family has managed to steer clear of controversy in recent years, although in 2012 a study by Herman Matthijs, professor of administrative science and public finances at Ghent University, found the House of Oranje-Nassau costs the country’s taxpayers £31 million a year.

King Willem-Alexander and Queen Máxima are to pay a state visit to the former Dutch colony of Indonesia in March.

On the Dutch monarchy’s website it says: “The state visit affirms the close, wide-ranging relationship between the two countries. Its guiding theme will be future-oriented cooperation in the areas of agriculture, healthcare, coastal protection and maritime technology, and circular economy and water technology. The programme will also focus on nature conservation, science, culture and the many ties that exist between the peoples of Indonesia and the Netherlands, based in part on their shared history. The King and Queen will be accompanied during their visit by foreign minister Stef Blok.”

There are very few monarchies in Africa but in Swaziland the king has complete power.

© AFP 2019 / GIANLUIGI GUERCIA
King Mswati III of Swaziland (L) walks in a traditional show of appreciation for maidens as they sing and dance on the last day of the annual royal Reed Dance at the Ludzidzini Royal palace on August 31, 2015 in Lobamba, Swaziland

In 2018 the nation’s absolute monarch, Mswati III, decided to change the country’s name to eSwatini.

Mswati said the new name - which simply means “land of the Swazis” - would avoid confusion with Switzerland in diplomatic circles.

King Mswati practices polygamy and has 15 wives, although that is quite modest compared to his father, Sobhuza II, who had 125 wives.