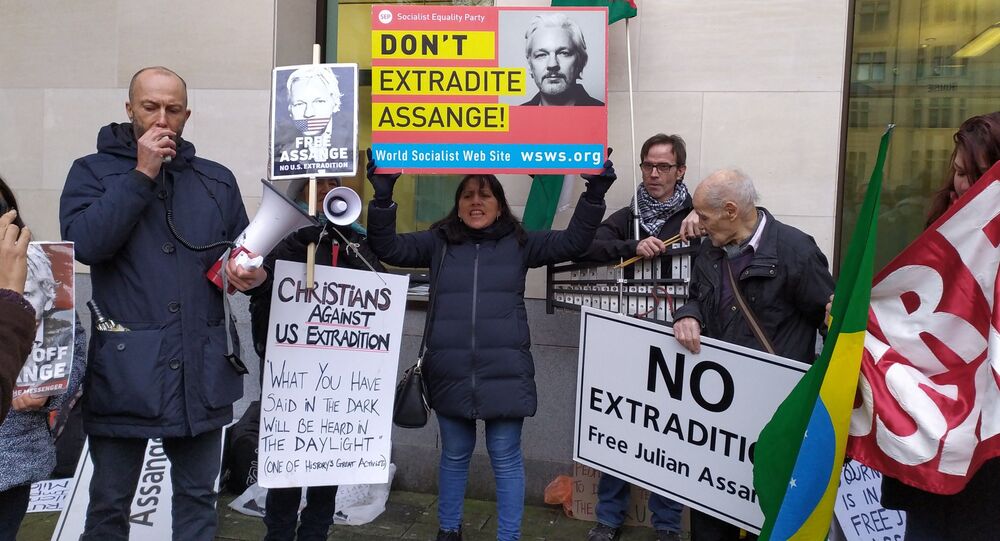 The judge overseeing Julian Assange’s extradition case has refused to intervene with prison authorities despite his lawyers saying he's being prevented from properly preparing his defence. Assange faces 175 years in prison for his role in publishing classified documents, some of which expose alleged war crimes committed by US forces in Iraq.

Julian Assange’s legal team is on the verge of bringing a judicial review against prison authorities for denying their client proper access to his lawyers and his case files, Westminster Magistrate’s Court was told on 13 January 2020. Assange appeared in person for an administrative hearing for the first time in months and was greeted by supporters raising their clenched fists in solidarity, which he acknowledged with a nod and a small wave of the hand.

At the hearing Judge Venessa Baraitser told Assange's lawyers that the “longest period [Assange will have before being taken back to Belmarsh prison] is going to be an hour” due to the fact that there were already 47 people in the custody cells and eight in the consultation rooms. Gareth Pierce, Assange’s lead solicitor, said that his legal team came to court with the expectation that they would discuss a “pretty substantial amount of evidence  which only Mr Assange can sign off on” and which would take far more than an hour. "[Only having an hour] sets us back in our timetable enormously", she explained.

The court is expecting Assange’s lawyers to serve further key documents in the next couple of days but Pierce said that that would not be possible without proper time with their client. She told the court that if it was willing to contact Belmarsh prison on her client's behalf then a meeting with his lawyers could be secured as early as 14 January. Judge Baraitser has consistently refused to intervene with prison authorities, claiming that she has no jurisdiction to do so, despite being presented with evidence of another judge doing precisely that.

“We have used every ability to press Belmarsh every way, and have [even] used government lawyers to note it is a breach of a defendant’s right to a defence… we are at the brink of judicial review”, Pierce told Judge Baraitser.

Outside the court Joseph Farrell, WikiLeaks ambassador and section chief, said that it was "unacceptable" for Assange, who is "facing a life sentence" in the US to only have a few hours access to his lawyers while the prosecution has had "10 years to mount the hardest case that they have with unlimited resources":

Joseph Farrell (@SwaziJAF), @WikiLeaks's ambassador and section editor, explains that #JulianAssange's legal team is on the verge of launching a judicial Review against Belmarsh prison for failing to give #Assange enough access to his lawyers in order to prepare his defence. pic.twitter.com/VO03Ue1uY6

​While Judge Baraitser remained unwilling to intervene with Belmarsh she did allow his hearing to be adjourned later in the day by another judge. In doing so she secured more time for Assange to consult with his lawyers before being returned to Belmarsh. Journalist and activist John Reese who attended the hearing suggested that Judge Baraitser was taking an increased interest in helping Assange secure more access to his lawyers:

Historian John Reese (@JohnWRees), @DEAcampaign, says Judge Baraitser seems to appreciate #Assange isn't receiving enough time with his lawyers. She left his hearing to be adjourned later in the day so he would have more time w/ his lawyers before being taken back to Belmarsh. pic.twitter.com/JhRLZpYaq9

​After the court hearing Amna Shaddad, of the Don’t Extradite Assange Campaign, explained that future events and rallies are being planned in defence of the imprisoned publisher, which should include notable singers such as Pink Floyd’s Roger Waters and M.I.A. Shaddad said that there are still people who aren’t as well informed about the case due to poor media coverage of the hearing. She argued that the more people know the more will start to stand against this "massive attack” on "journalist freedom and the people’s right to know".

Amna Shaddad, of @DEAcampaign, says they will continue to organise rallies and protests in defence of #JulianAssange in order to galvanise support for the WikiLeaks publisher. pic.twitter.com/k2YgRAGnuw

​Assange faces up to 175 years in prison in the US where he is wanted for his role in publishing classified US documents in 2011, which revealed alleged war crimes and crimes against humanity perpetrated by US-led occupation forces in Iraq.