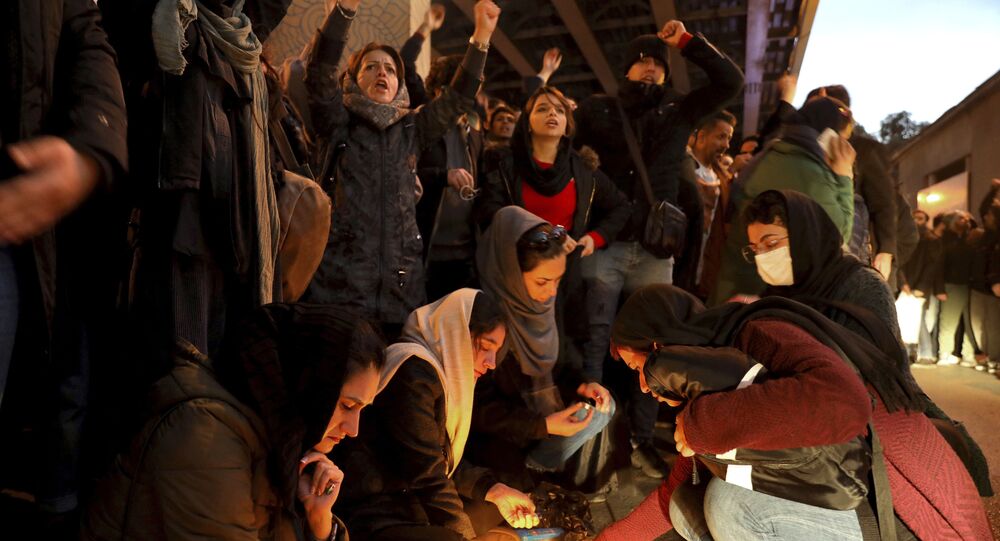 Previously, President Donald Trump took to Twitter to warn the Iranian authorities against "killing protesters" and tweeted his support for the demonstrations sparked by Tehran’s unintentional downing of a Ukrainian jet amid spiralling US-Iran tensions.

Police in the Iranian capital did not fire on protesters and officers have been under orders to show restraint, Tehran's police chief said in a statement carried by the state broadcaster's website on Monday.

"At protests, police absolutely did not shoot because the capital's police officers have been given orders to show restraint," said Hossein Rahimi, head of the Tehran police.

Videos posted on social media late on Sunday had recorded gunshots fired in the vicinity of protests and showed pools of blood. They also showed images of wounded people being carried by others in footage that Reuters reported could not be authenticated.

Scores of protesters gathered for a second day in Iran on Sunday chanting slogans against the authorities following the military's admission it had shot down a passenger plane in error.

Earlier, US President Donald Trump tweeted his support for Iranian protestors both in English and in Farsi.

On 12 January the US President tweeted:

“To the brave, long-suffering people of Iran: I've stood with you since the beginning of my Presidency, and my Administration will continue to stand with you. We are following your protests closely, and are inspired by your courage.”

​Before that, Trump took to Twitter to warn the Iranian authorities against "killing protesters".

A day earlier, media reports emerged of protests in Iran against those responsible for the deadly accidental downing of a Ukrainian Airlines Boeing 737 that killed all 176 people on board.

A peaceful gathering of hundreds of students outside the Amirkabir University of Technology in Tehran to honour the victims of the fatal crash resulted in a rally, with protesters calling for the removal of senior government officials and demonstratively tearing the portrait of slain Gen. Qasem Soleimani, killed in a US targeted drone strike on 3 January.

The jetliner crashed early Wednesday, hours after Tehran launched missile attacks on two Iraqi military bases housing American troops as a retaliation for the US strike that killed Soleimani.

On Saturday, the Iranian Revolutionary Guard Corps admitted to downing Ukrainian Airlines Boeing 737 by mistake, confusing it with a cruise missile. Iran had previously maintained the incident was caused by a technical error.