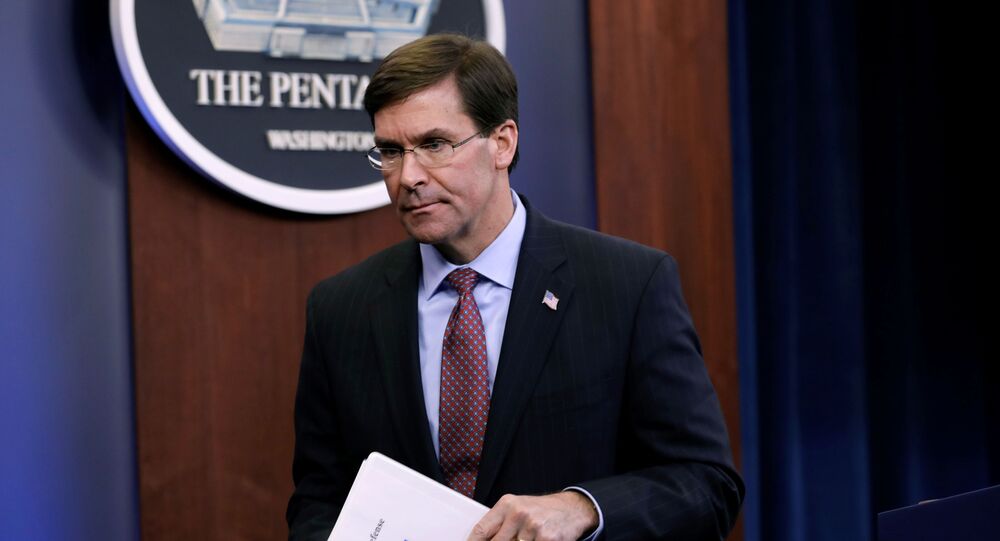 Officials at the White House, the State Department and the Pentagon have repeatedly pointed to the ‘threat’ to US interests posed by Quds Force commander Qasem Soleimani, who was assassinated in a US drone strike last week, but have so far failed to provide substantive evidence regarding the Iranian general’s alleged malign intentions.

US Secretary of Defence Mark Esper appeared to mix up his own position on why the US made the decision to kill Gen. Qasem Soleimani, giving CNN and CBS two conflicting accounts on the matter.

“There was intelligence that there was an attempt to target the US Embassy in Baghdad. What the president said with regard to the four embassies is what I believe as well,” Esper said, speaking to CNN on Sunday morning.

“He said that he believed that they probably, that they could have been targeting the embassies in the region,” Esper said. When asked to clarify what specific intelligence pushed the US president to make his decision, Esper responded that he was “not going to discuss intelligence matters here on this show.”

Defense Secy. Mark Esper says he believes an attack against the US was imminent and “days away” ahead of the strike against Qasem Soleimani #CNNSOTU pic.twitter.com/TtkXv20bms

However, in a separate interview with CBS’s Face the Nation Sunday, Esper offered a different explanation, saying that “what the president said was he believed that there probably could have been attacks against additional embassies. I shared that view, I know other members of the national security team shared that view. That’s why I deployed thousands of American paratroopers to the Middle East to reinforce our embassy in Baghdad and other sites throughout the region.”

When pressed by CBS’s Margaret Brennan, Esper admitted that “Well, the president didn’t say there was a tangible – he didn’t cite a specific piece of evidence. What he said is he probably – he believed could have been.” The Pentagon chief admitted to Brennan that he personally “didn’t see [a decisive piece of intelligence] with regard to four embassies.”

Over a week after Soleimani’s assassination, the Trump administration has yet to reveal any of the intelligence it said was used by the president in his determination to kill the Iranian general in Baghdad on January 3.  On Thursday, President Trump said the US killed Soleimani because he planned to ‘blow up the US Embassy’ in Iraq. Later, Secretary of State Mike Pompeo, who previously spoke of an “imminent” plan by Soleimani to target US interests, admitted that he could not provide any information about the time and place the Iranian general allegedly planned to attack the US. On Friday, Trump upped the number of US embassies allegedly targeted by Soleimani to four.

On Saturday, the New York Times reported, citing unnamed US officials, that US planning to assassinate Soleimani went back to at least September 2019, and possibly as far back as July 2018.

Soleimani, 62, was killed on the morning of Friday, January 3 after the convoy he and a senior Iraqi Shia militia leader were riding in was struck and destroyed in a US drone strike. Before his death, he led Iran’s elite Quds Force in multiple military campaigns across the Middle East, targeting al-Qaeda*, Daesh*, and other terrorist groups across Afghanistan, Syria and Iraq. Soleimani’s assassination has caused the worst escalation of tensions between Iran and the US since the 1979 Iranian Revolution.