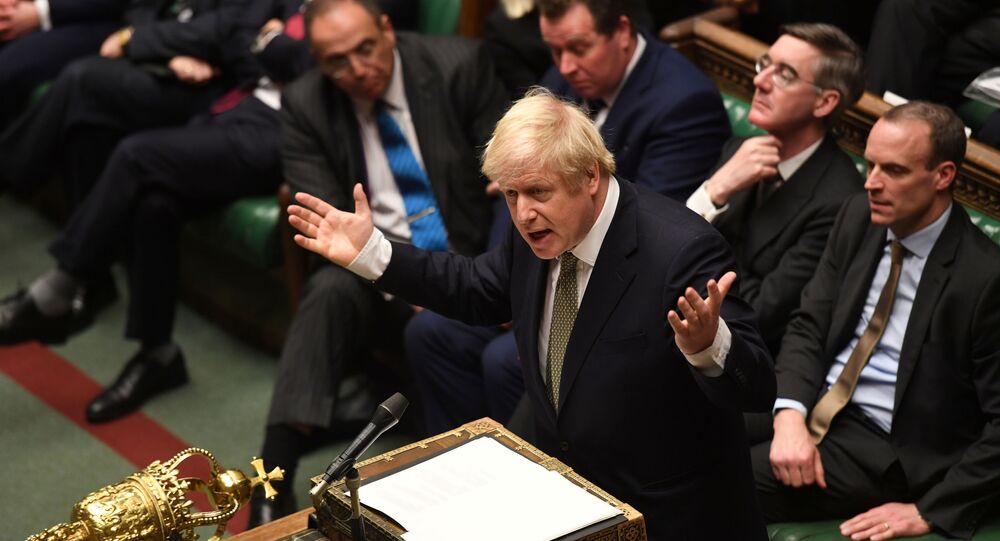 On 8 January, two waves of missile strikes were carried out by Iran's Islamic Revolutionary Guard (IRGC) against US military facilities in Erbil and Ayn al-Asad Air Base in Iraq.

"We of course condemn the attack on Iraqi military bases hosting coalition forces. Iran should not repeat these reckless and dangerous attacks but must instead pursue urgent de-escalation", Johson said.

Earlier in the day, Raab said that the UK is "concerned by reports of casualties and use of ballistic missiles", adding that "a war in the Middle East would only benefit Daesh and other terrorist groups".

Media reports earlier suggested that about 80 people were killed and around 200 injured following Tehran's airstrikes targeting US military facilities in Iraq's Erbil and Ayn al-Asad Air Base. Washington has not confirmed this information yet.

Meanwhile, Iraq's military has said that no casualties were recorded among the country's forces following 22 projectiles launched by Iran towards American facilities in Iraq. According to a statement by the Iraqi military, 17 missiles targeted Ayn al-Asad Air Base, while 5 others reportedly fell on coalition headquarters in the city of Erbil.

On Wednesday morning, two waves of airstrikes were launched by the IRGC against American military forces in Iraq. No retaliatory strike from the US followed, but US President Donald Trump tweeted that he would make a statement later about the attacks.

© AP Photo / Office of the Iranian Supreme Leader
Qasem Soleimani: What We Know About Iranian Elite Force’s General That US Took Aim at
Iran's airstrikes follow the killing of Qasem Soleimani, Commander of the IRGC's elite Quds Force last week. Soleimani was targeted in a US drone strike ordered by the Trump administration that White House officials branded as "defensive" measures.