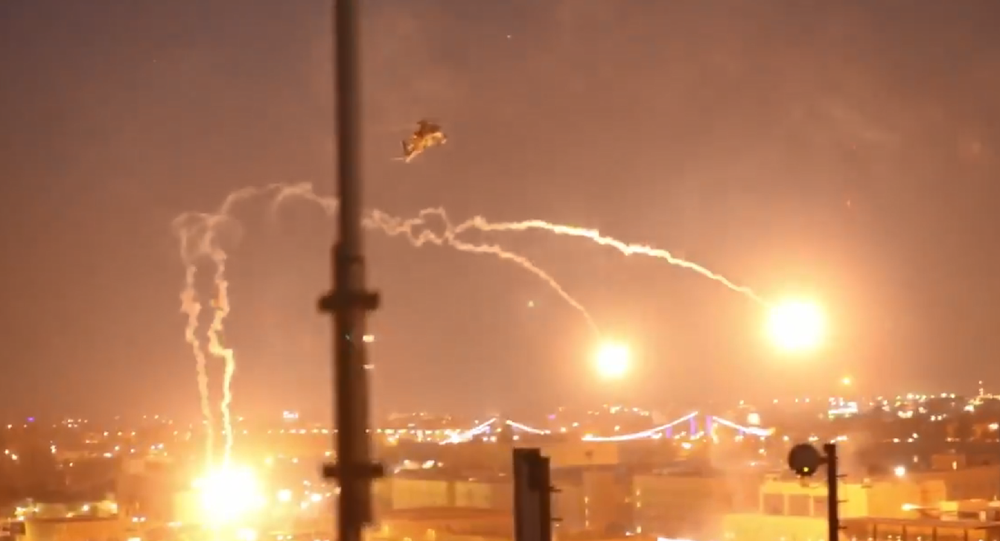 Iraqis surrounded the American Embassy in Baghdad on 31 December and on 1 January following US strikes against Kata’ib Hezbollah bases in Iraq and Syria that claimed the lives of 25 people.

The first videos purportedly showing the redeployment of American forces from Kuwait to Iraq in order to defend the US Embassy, which has been besieged by protesters since 31 December, emerged online on 1 January. Their redeployment was announced earlier by the Special Purpose Marine Air-Ground Task Force, which noted that US Marines were transported to their destination using MV-22 Osprey vertical take-off and landing (VTOL) aircraft.

One of the videos that surfaced online allegedly shows Marines preparing their weapons and boarding the Ospreys ahead of their redeployment from Kuwait to Iraq.

Another video purportedly showed the moment when the aircraft carrying US troops landed on the embassy's premises.

The Marines didn't come alone, however, but brought several AH-64 Apache combat helicopters, which released countermeasures above the Iraqi capital at night.

The Marines have arrived at the U.S Embassy.

Along with AH-64 Apaches.

No doubt there will be a lot more "mourning" if Iran & Hezbollah do not stand down. pic.twitter.com/dMNyMYiFfV

Following the attack on the embassy, US Defence Secretary Mark Esper announced the deployment of 750 American soldiers to the region to safeguard US personnel.

Several videos also emerged allegedly showing protesters besieging the US Embassy in Iraq and yelling at the guards, who were barricaded inside, and trying to force their way in by using an improvised door ram.

#USMarines hiding like rats inside the #US embassy in #Baghdad, #Iraq worrying about the masses surrounding the embassy following the #US aggression that killed 31 & wounded 50 of #Iraq's Popular Mobilization Forces that are part of #Iraq's Armed Forcespic.twitter.com/baYUpXGq6G

One video purportedly showed how the defenders inside the embassy attempted to disperse the besieging crowd by using tear gas and smoke.

The protests near the US Embassy erupted on 31 December and continued on the 1 January, with the crowd setting its fence and entrance on fire and unsuccessfully trying to breach the perimeter. Washington responded to the attack on the building by redeploying troops and promising to send a total of 750 servicemen to the region.

The protests came as a response to US airstrikes against Kata’ib Hezbollah bases in Iraq and Syria, which claimed the lives of 25 people. The US, however, accused Iran of organising them, with President Donald Trump "threatening" that Tehran would pay "a very big price" for it. The Islamic Republic has denied involvement and cautioned Washington against issuing such threats.