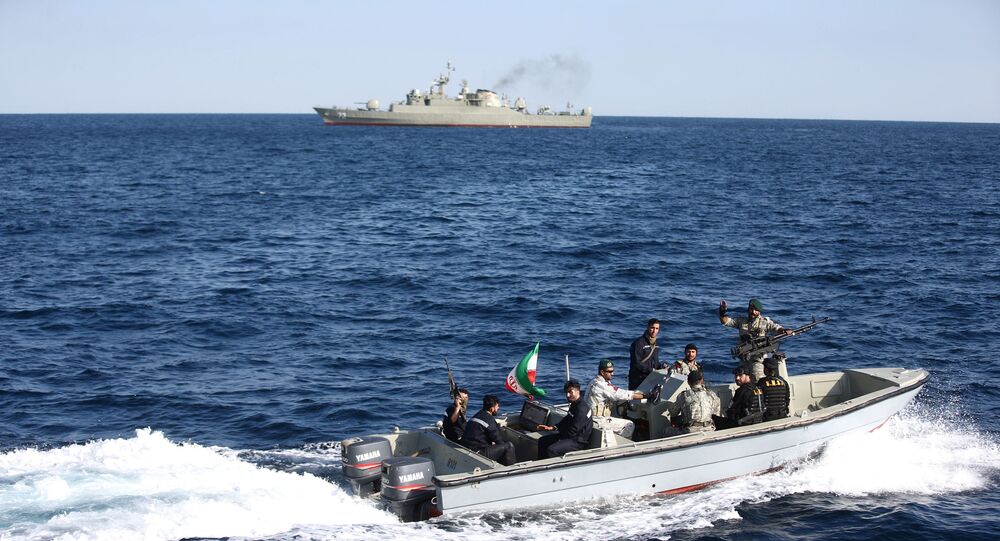 WASHINGTON (Sputnik) - A senior State Department official on Monday criticized Russia and China for holding joint naval exercises with Iran and urged them to instead join the campaign of sanctioning and isolating Tehran.

"Now it’s not the time for governments to be doing any sort of military exercises with this regime. We think now is the time to be sanctioning the Iranian leadership for the human rights abuses that it has committed against its own people and to be diplomatically isolating the regime in every way possible", the official said at a press briefing.

The official accused the Iranian authorities of killing 1,500 of its own people during a recent clampdown on a wave of protests, injuring and jailing thousands more.

"They [countries exercising with Iran] are sending a very clear message to the Iranian people that they are siding with their oppressors and their murderers", the official said.

On Friday, Russia, China and Iran launched the joint exercise "Naval Security Belt" in the northern Indian Ocean and the Gulf of Oman.

The participants were set to exercise fighting terrorism and piracy as well as providing regional security. The exercise was scheduled to last four days during which time the countries’ navies would share knowledge and experience of naval rescue operations.

The drills are taking place after a string of incidents hit the Hormuz strait earlier this year, including mysterious attacks on oil tankers, for which Washington blamed Tehran. Iran consistently denied its involvement. The Pentagon said earlier that it will monitor the naval war games.

Mohammad Berno
Moscow Calls US Plan to Restore Sanctions Against Fordow Violation of Int'l Obligations
Iranian Foreign Minister Javad Zarif said during his recent visit to Moscow that the joint drill did not aim against other countries, while Chinese Defence Ministry spokesman Wu Qian had asserted that it had no connection to the recent tensions in the region.

Russia and China are also signatories to the landmark 2015 accord - the Joint Comprehensive Plan of Action (JCPOA) - also known as Iran nuclear deal. The agreement stipulates that Tehran significantly limits its nuclear program in exchange for the lifting of international sanctions.

On 8 May 2019, one year after the US unilateral withdrawal from the agreement, Iran announced a gradual reduction of its JCPOA obligations. Tehran then said that it would start abandoning some parts of its nuclear commitments every 60 days unless European signatories to the deal ensured Iran's interests amid Washington’s reinstated sanctions.