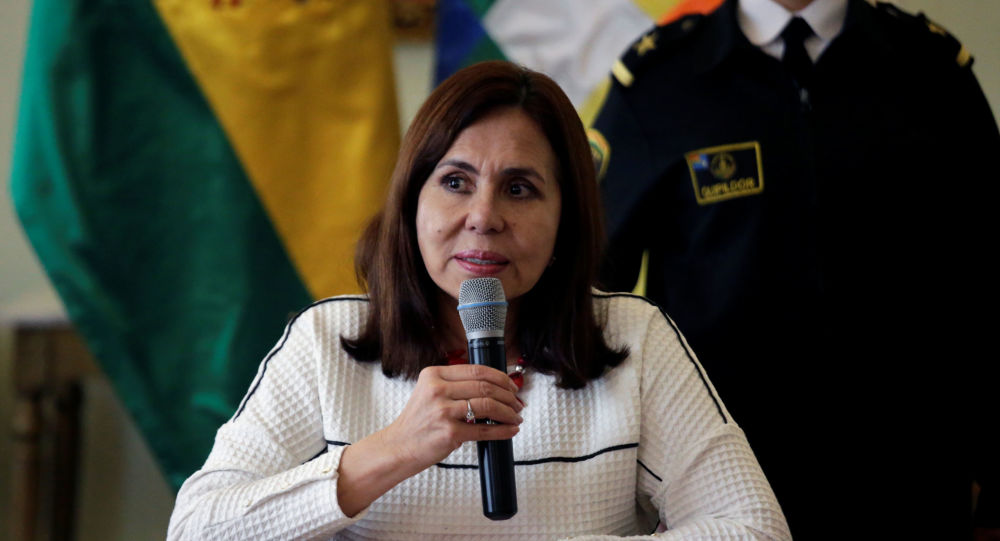 MEXICO CITY (Sputnik) - The foreign minister of Bolivia's interim government, Karen Longaric, has called on Madrid in an official note to the Spanish government to stop violation of international norms after the incident with Spanish diplomats in the Mexican embassy in La Paz.

"Let it be the last time your government allows itself to violate international norms and diplomatic courtesy," the note read, as quoted by Bolivia's El Deber news outlet.

According to Interior Minister of Bolivia's interim government Arturo Murillo, the Spanish diplomats who allegedly tried to secretly enter the Mexican embassy "insulted Bolivia" and should leave the country. He also said that the masked people aimed at extracting a former aide to Evo Morales charged with sedition and terrorism.

The Spanish Foreign Ministry, in turn, stated that it was a purely courteous visit and the country's diplomats did not have any plans to evacuate former Bolivian officials. Madrid added that the masked people were embassy's guards who served in the Special Group of Operations of the Spanish National Police.

The Mexican embassy in La Paz currently hosts nine former Morales officials under the claim of asylum, four of whom are wanted at home on charges of sedition and terrorism. On Monday, Mexico voiced deep concerns over the "excessive presence" of Bolivian security officers near its embassy, and their purported attempts to intimidate diplomats and search their vehicles in actions that amount to violations of the Vienna Convention — the document grants immunity to diplomatic premises and personnel.

On Friday, the Bolivian police prevented hooded personnel accompanying Spanish charges d'affaires from entering the embassy building. According to La Paz, they tried to secretly infiltrate the Mexican mission in the country, which hosts nine officials from the government of ousted Bolivian President Evo Morales.

Under pressure to resign from the protesting public and nation's military, Morales stepped down from his fourth term in office on 10 November and fled to Mexico. Most of Bolivia’s senior government officials also resigned and sought asylum in the Mexican embassy in La Paz. In the meantime, the Senate's second vice speaker, Jeanine Anez, declared herself interim president, and the new authorities announced a presidential election for mid-March.