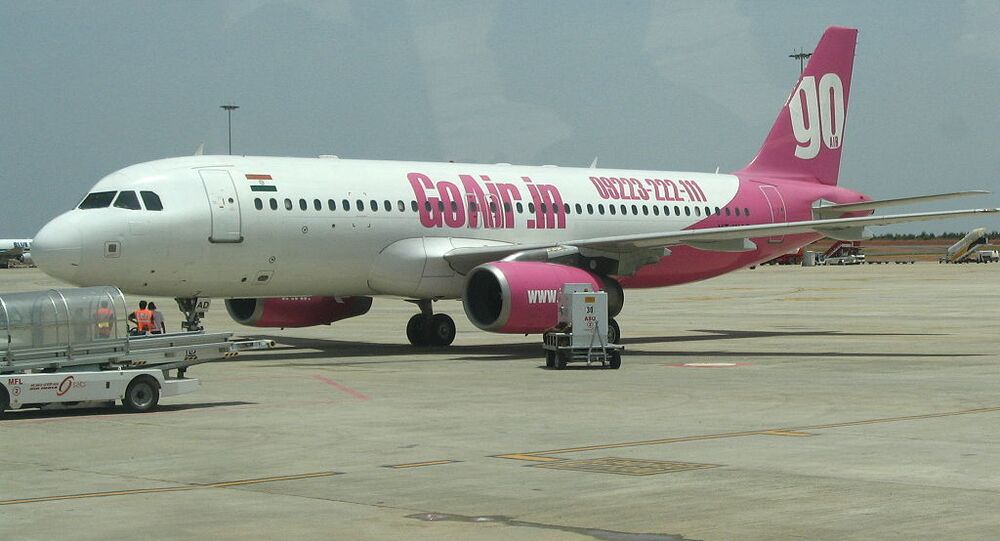 New Delhi (Sputnik): India’s no-frills carrier GoAir has cancelled more than 40 flights in the past four days, claiming inclement weather and the uncertain delivery of aircraft are creating problems with normalising operations. Airbus has been facing huge pressure to replace over one hundred engines in its A320 Neo aircraft in India.

GoAir has blamed European Airbus' delay in delivery aircraft for operational challenges that it has been facing for past few weeks.

"GoAir has placed an order for 144 Airbus A320Neo aircraft and experienced delivery delays during the month of November and December, adding to its operational challenges," the airline clarified.

The airline added that bad weather in North India was another reason for the cancellation of flights, as its crew approached its flight duty time limits (FDTL) in the last two-three days. Cockpit and cabin crew duty and rest norms are governed by the aviation safety regulator, the Directorate General of Civil Aviation (DGCA).

The airline, however, expects operations "to be on track by the end of this week" as it is working to normalise them.

Hi, we are currently experiencing a high number of calls at our customer care centre. We request you to connect with our call centre team in some time, and they'll be glad to assist you.

Earlier this week, DGCA had criticised GoAir for making its crew work for longer than the mandated hours.

#goair never seen so shitty service. Cancelled flight without notice. Customer care not reachable. And another flight delayed by 5 hr.
I love think twice before booking my next flight from #goair

Aviation sources said GoAir which operates around 200 flights on a daily basis, has a shortage of around 30 pilots. Despite being flooded with unemployed pilots in the wake up of shutting down the country’s largest airline, Jet Airways, in April this year, GoAir was unable to plan the induction additional pilots with uncertain Airbus delivery schedules.

GoAir has also been facing snags with  Pratt & Whitney (PW) engines for Airbus A320 Neos. "During the same time, the non-availability of Pratt & Whitney spare engines has also hampered the smooth functioning of the airline," a GoAir spokesperson said.

India’s Aviation Watchdog has already ordered the country’s biggest airlines IndiGo and GoAir to replace the engines on their A320Neo fleet of 97 aircraft by January 31 "at all costs" or face grounding. The DGCA had also asked the airlines to halt the introduction of around 300 Airbus aircraft in order to adhere to the engine replacement deadline.