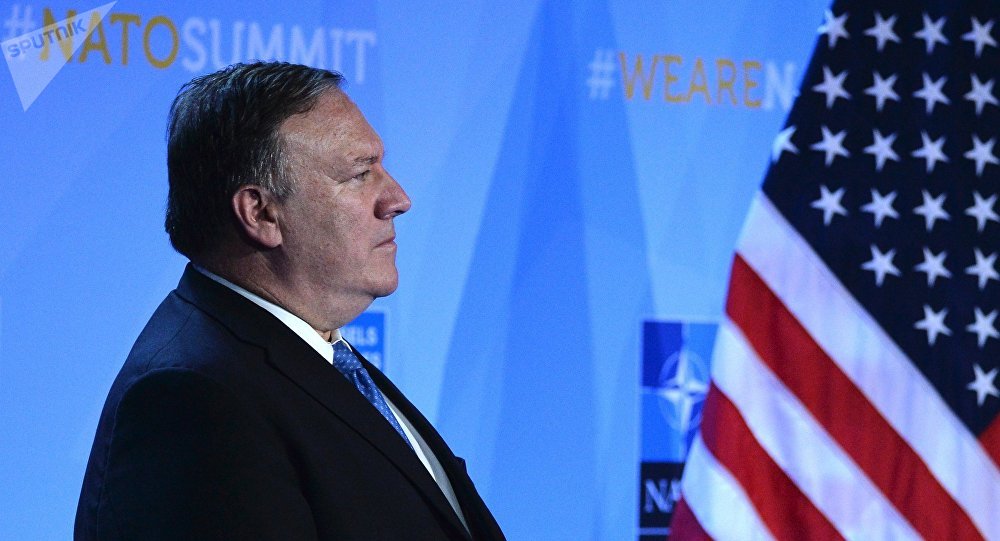 On Thursday, the US secretary of state reiterated that America “supports” and “stands with” Iranians protesting fuel price hikes, and would continue piling on sanctions against Tehran.

Iranian Foreign Ministry spokesman Seyed Abbas Mousavi has lashed out against US Secretary of State Mike Pompeo, suggesting he was not fit to serve as America’s top diplomat.

“Foreign ministers are usually harbingers of peace, reconciliation, dialogue, and respect, but Mr. Pompeo is the mouthpiece of [those who] bully, deceive, humiliate and insult, with angry, aggressive, ignorant and extremist language,” the spokesman said, his comments quoted by the Tasnim News Agency.

Characterising Pompeo’s recent remarks about US support for Iranian protesters as a “propaganda show”, Mousavi recalled that the secretary of state was appointed to his post from his previous job as CIA director, a “hellish, deceitful, and torturer organisation” intent on overthrowing foreign governments.

Mousavi claimed that Pompeo has brought his “hellish thoughts” from his time at the US intelligence agency to his current job, adding that the secretary was not “on a par with any foreign minister in the world.”

Pompeo served as the director of the Central Intelligence Agency between 2017 and 2018. At an April 2019 speech at Texas A&M University, Pompeo quipped that during his time at the CIA, “we lied, we cheated, we stole,” saying the experience reminded him “of the glory of the American experiment.”

The CIA helped stage a coup d'etat against Iran's democratically elected government in 1953 after the country moved to nationalise the country's mostly foreign-owned oil resources. The US-backed government was itself overthrown in the Iranian Revolution of 1979, leading to over four decades of poor relations between Tehran and Washington.

© AP Photo /
Flashback From Iran’s 1979 Takeover of US Embassy

Iran has repeatedly censured Pompeo over his interference in the Iran protests, which broke out in November, and led to large-scale street violence and the deaths of several hundred protesters and security personnel. The government had cut fuel subsidies as part of a programme to increase support for low-income families, and to reduce the impact of economic shocks caused by US sanctions.

The new sanctions were just the latest in a series of over 90 restrictive measures introduced by the US against Iran since May 2018, when the Trump administration unilaterally scrapped its commitment to the 2015 Iran nuclear deal.

This week, Iranian Ambassador to the UN Majid Takht-Ravanchi suggested that the US’s “illegitimate, immoral, inhumane and cruel” sanctions against Iran, which include restrictions against the sale of food and medicine to the country, were tantamount to “war by another means and name”.

US restrictions against Iran target individuals, companies, the Iranian government and the country’s banking and energy sectors. Additionally, the US Treasury has given itself the authority to sanction third parties, including foreign countries, companies and individuals which do business with the Islamic Republic.