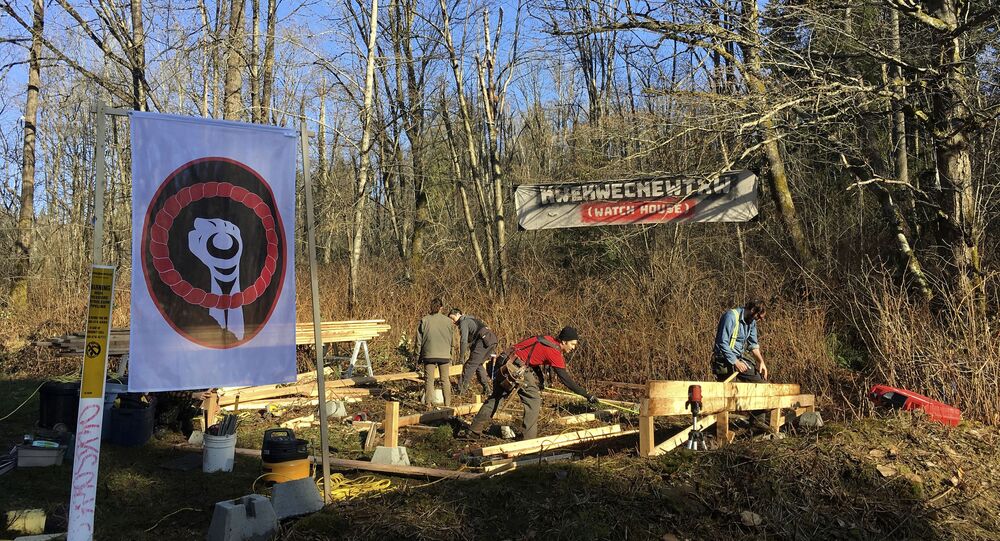 “Lethal overwatch is req’d” - is a code phrase that commanders of Canada’s national police force, the Royal Canadian Mounted Police (RCMP), used while instructing officers ahead of the raid to remove barricades set up by the Wet’suwet’en people attempting to block the construction of the proposed Coastal GasLink pipeline (CGL) on tribal lands.

The Guardian cited documents from a strategy session for a militarized raid on the ancestral lands of the Wet’suwet’en nation - descendants of indigenous tribes that once inhabited Canada's British Columbia.

The notes reportedly show that RCMP commanders instructed officers to “use as much violence toward the gate as you want”. A separate note reportedly advised Canadian police to conduct mass arrests for “sterilizing the site”.

Police records seen by the UK-based media outlet include transcripts from police strategy sessions, reports filed, and audio and video files, as well.

Indigenous residents and their local supporters reportedly erected a checkpoint in December 2018 to stop construction of the proposed 670-kilometer (416-mile) CGL pipeline through the sacred ancestral region.

The checkpoint lies 22 kilometers east of the camp run by a group of the Wet’suwet’en, called Unist’ot’en, which has been at the epicenter of the struggle against the fossil fuel pipeline, The Guardian said.

According to the media report, citing local indigenous people, the improvised camp is one of several instances where the Wet’suwet’en nation re-inhabited ancestral territory that falls outside of demarcated reservations, what the indigenous people refer to as "reoccupation".

In the early days of 2019, heavily armed RCMP squads reportedly raided the checkpoint and arrested over a dozen activists.

“In our experience, since first contact, RCMP have been created by the federal government to dispossess Indigenous peoples of their lands [...] They have proven [that] through their harassment of my people to support Coastal GasLink in invading our territories”, Huson said, cited by The Guardian.

According to police notes, cited by the media outlet, one document noted that the Wet’suwet’en possessed “firearms for hunting/sustenance” but police intelligence indicated that there was “no single threat indicating that [land defenders] will use firearms”.

“During the planning for the enforcement of the court-ordered injunction, the RCMP took the remote location of the Morice River Bridge into account and ensured that enough police officers were present in the area [...] We also took into consideration the unpredictable nature of what we could face in the remote area, and so we moved additional police resources including members of the tactical and emergency response teams to provide support”, an RCMP spokesperson said, cited by The Guardian.

Currently, the Wet’suwet’en people are preparing for a provincial supreme court ruling on an injunction which seeks to permanently restrict the indigenous people from blocking access to the CGL gas pipeline construction site situated on their ancestral grounds.

According to reports, the Wet’suwet’en have never ceded their ancestral homelands to the Canadian government by treaty, sale or surrender.