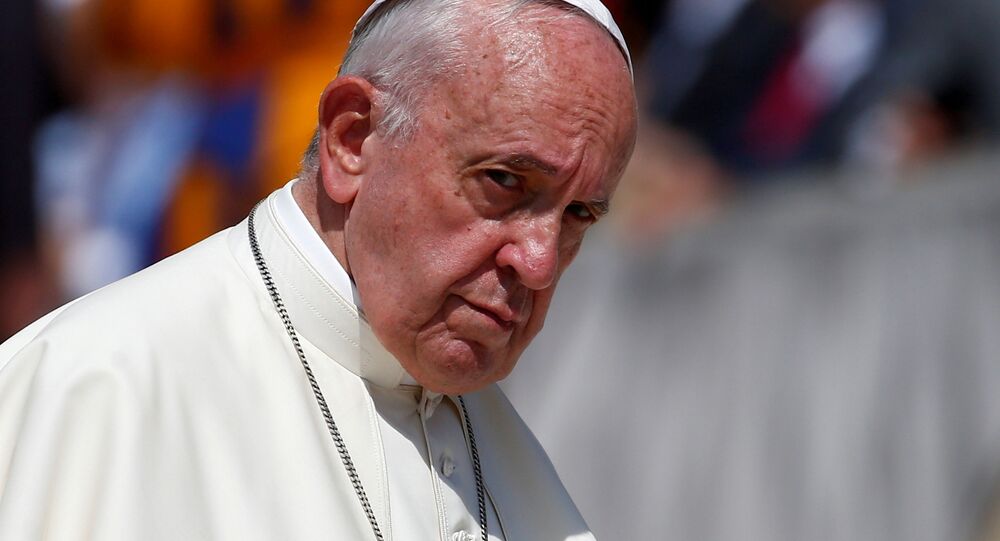 The Pontiff has not yet announced any plans to step down, but a journalist working with the Vatican has claimed that it could happen as early as next year.

A centuries-old apocryphal prophecy foretells the end of times after the last pope. The same text says Pope Francis could be that last one.

The Prophecy of the Popes is a list of 112 popes and antipopes in succession. It was first published in 1595 by monk Arnold Wion in Lignum Vitæ, a book on the history of the Benedictine order.

Wion attributed it to Saint Malachy, the 12th-century Irish saint and Archbishop of Amragh. According to a later account, the manuscript with Malachy prophecy was stored in the Vatican archives but was forgotten until its rediscovery in 1590.

The text contains (often metaphoric) mottos/descriptions of pontiffs; the first description on the list is widely believed to be attached to Pope Celestine II (1143-1144). If those descriptions are matched one by one with the list of his successors, Pope Francis would be the last, 112th pope. According to the prophecy, the last pope is identified as ‘Peter the Roman’.

This is what it says of his papacy: “Peter the Roman, who will pasture his sheep in many tribulations, and when these things are finished, the city of seven hills will be destroyed, and the dreadful judge will judge his people. The End.”

The penultimate pope on the list is described as ‘glory of the olive’. Proponents of the prophecy view it as a reference to Benedict XVI, Francis’s predecessor, who chose his papal name after Saint Benedict of Nursia. The latter was the founder of the Benedictine order, which comprises the Olivetans.

As for Francis himself, there is a far-fetched theory that ‘Peter the Roman’ has a connection with Saint Francis of Assisi, whose father was named Pietro (Peter).

Is this prophecy to be believed?

There is no historical consensus on the veracity of the text, but several researchers have pointed to the fact that the verses referring to popes who reigned up until around 1590 are very accurate (they often refer to papal heraldry), but the descriptions for the popes that follow are rather vague. This means the prophecy was likely forged around the time it was published, which could explain the rapid decline in accuracy.

Malachy’s biographer and contemporary, Saint Bernard of Clairvaux, has left no mention of the prophecy. An Irish priest named O’Brien, who wrote an 1880 monograph on the text, believed that it was based on a 1557 list of popes that included their heraldry.

O’Brien said: “It is impossible to attribute such absurd triflings ... to any holy source. Those who have written in defence of the prophecy ... have brought forward scarcely an argument in their favour. Their attempts at explaining the prophecies after 1590 are, I say with all respect, the sorriest trifling.”

Why would Pope Francis want to resign?

Pope Francis (born Jorge Mario Bergoglio) took the Catholic Church in 2013, following the resignation of Benedict XVI, then 86 years of age, due to declining health. Roman popes typically reign from election until death, with Benedict becoming the first pontiff to relinquish the office in around 600 years.

Francis, now 83, has not given any word so far on whether he would ever resign. However, Catholic journalist Austen Ivereigh, who authored Pope Francis’ biography, claimed in 2015 that Pope could step down as early as next year.

“He made clear from the beginning that he regarded Pope Benedict’s act as a prophetic act of great humility and he would have absolutely no problem in doing the same.”

“What was interesting was that he said to Mexican television [in 2014] that he believed that he would have a short papacy he thought of about five years.

“But what I’m hearing now from people close to him is that he’s going to need seven years to achieve his five-year plan and that, of course, would mean staying on until 2020.”

Pope Francis also faced calls to resign last year in the wake of massive sex scandals that have rocked the Church. Archbishop Carlo Maria Vigano wrote an open letter claiming that he had informed Pope Francis about sexual assault allegations against Theodore McCarrick, the former archbishop of Washington, but the Pope turned a blind eye to them.

“In this extremely dramatic moment for the universal Church,” Vigano wrote, “[Pope Francis] must acknowledge his mistakes and, in keeping with the proclaimed principle of zero tolerance, Pope Francis must be the first to set a good example to Cardinals and Bishops who covered up McCarrick’s abuses and resign along with all of them.”

Several senior figures in the Catholic Church criticised Vigano’s accusations as unsubstantiated, while Pope Francis maintained that he “knew nothing” about McCarrick’s crimes. “I don't remember if [Vigano] told me about this,” he said. “If it’s true or not. No idea! But you know that about McCarrick, I knew nothing. If not, I wouldn't have remained quiet, right?”