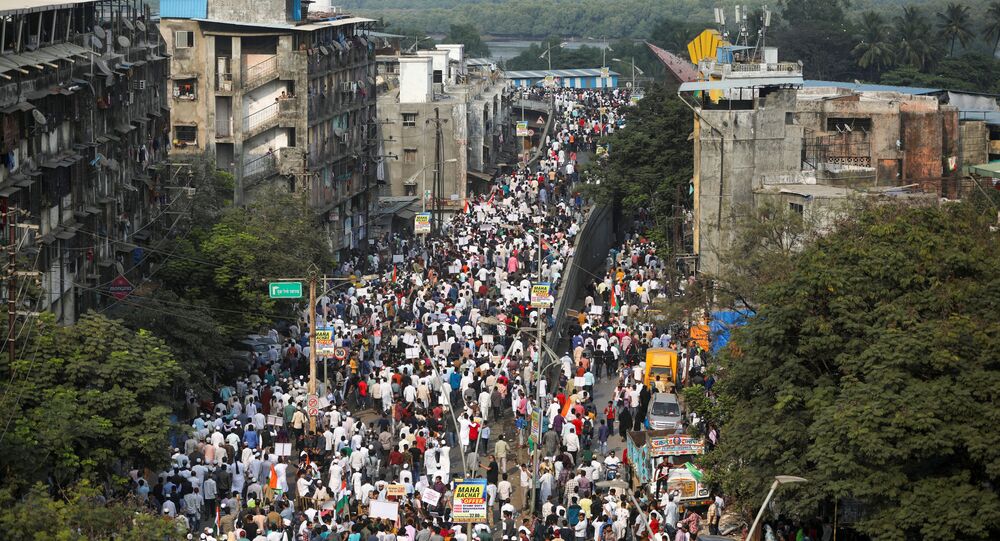 New Delhi (Sputnik): Protests condemning a controversial citizenship law enacted by the federal government in India do not appear to be subsiding. Several organisations have called for mass agitation on Thursday across the country to protest against the law.

States across India, meanwhile, imposed prohibitory orders or denied permission to hold rallies or public meetings to thwart any agitation against the law. The most common legal provision enforced was Section 144 of Indian Penal Code, which prohibits assembly of four or more people.

In India's capital, police have enforced prohibitory orders near the iconic Red Fort, the announced venue of the protest, and denied the organisers a permit for staging a demonstration.

Notable historian Ramachandra Guha and activist Yogendra Yadav, from Karnataka and Delhi, respectively, have been detained for defying prohibitory orders.

DMRC: Entry & exit gates of Central Secretariat metro station are closed. However, interchange facility is available at this station. https://t.co/ybpKxx1Vt4

India’s northern state of Uttar Pradesh has enforced prohibitory orders across the state on Thursday in the run-up to the announced protests against the contentious law.

Security has also been stepped up in the nation's financial capital Mumbai, where many Bollywood celebrities had announced their participation at a protest meeting at the famous August Kranti Maidan. Police have imposed restrictions and diverted traffic.

In the neighbouring Karnataka, where the Bharatiya Janata Party-led government has vowed to implement the law and the proposed National Registry of Citizens, prohibitory orders were imposed in the state capital Bengaluru and several other parts of the state to stop any protests against the new citizenship law.

Prohibitions on protesting have also been imposed by western Gujarat, and in cities where protests against the law were announced.

The all-India student union, the student wing of the communist party, which had called for protests against the law, however, vowed to go ahead with their announced rallies, regardless of the prohibition.

The controversial Citizenship (Amendment) Act 2019, enacted by India's federal government, grants citizenship to illegal immigrants from six religious minorities – Hindus, Parsis, Jains, Christians, Buddhists, and Sikhs, but excludes Muslims, from Afghanistan, Bangladesh, and Pakistan, if they arrived in India prior to 2015.